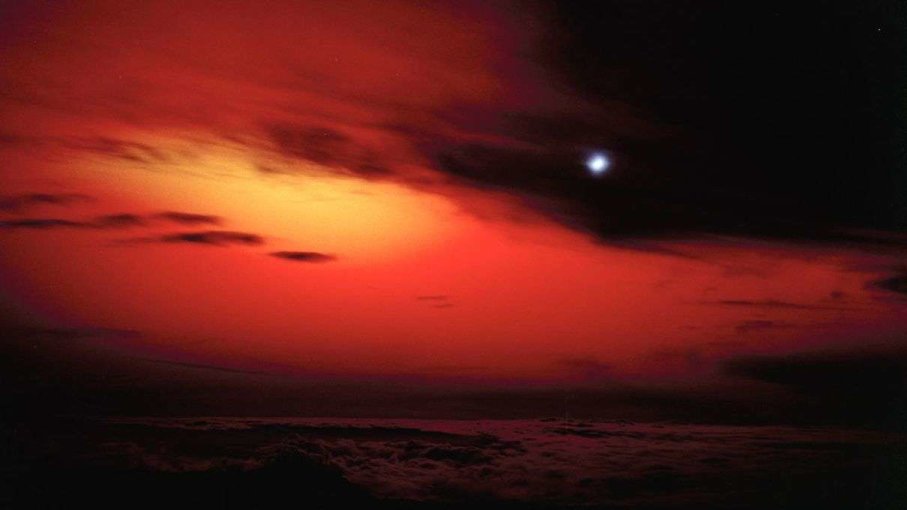 By Brian Gutierrez,
Published by the National Geographic, 15 July 2021

The results from the 1962 Starfish Prime test serve as a warning of what might happen if Earth’s magnetic field gets blasted again with high doses of radiation.

It was pitch black when Greg Spriggs’ father brought his family to the highest point on Midway Atoll on July 8, 1962. That night on another atoll a thousand miles away, the U.S. military was scheduled to launch a rocket into space to test a fusion bomb.

“He was trying to figure out which direction to look,” Spriggs recalls. “He thought there was going to be this little flicker, so he wanted to make sure everybody was going to see it.”

Spectators were also holding “watch-the-bomb parties” in Hawaii, as the countdown was broadcast over shortwave radio. Photographers aimed their lenses toward the horizon and debated the best camera settings for capturing a thermonuclear explosion in outer space.

It turned out that the blast—a 1.4 megaton bomb, 500 times as powerful as the one that fell on Hiroshima—was not subtle.

“When that nuclear weapon went off, the whole sky lit up in every direction. It looked like noon,” says Spriggs. Starfish Prime exploded at an altitude of 250 miles, at about the height where the International Space Station orbits today. For as long as 15 minutes after the initial explosion, charged particles from the blast collided with molecules in Earth’s atmosphere, creating an artificial aurora that could be seen as far away as New Zealand.

“It looked as though the heavens had belched forth a new sun that flared briefly, but long enough to set the sky on fire,” according to one account in the Hilo Tribune-Herald. An accompanying electromagnetic pulse washed out radio stations, set off an emergency siren, and caused streetlights to black out in Hawaii.

The following year, the U.S., the U.K., and the U.S.S.R. signed the Limited Nuclear Test Ban Treaty, and outer space has been H-bomb free for almost 60 years. But the results of Starfish Prime serve as a warning of what might happen if Earth’s magnetic field gets blasted again with high doses of radiation, either from another nuke or from natural sources such as the sun.

The memory of that day stuck with Spriggs, who is now a weapons scientist at Lawrence Livermore National Laboratory in California, where he works preserving and analyzing archival nuclear test footage. “I told my dad years later, ‘You know, if I knew I was going to become a nuclear weapon physicist, I would have paid more attention,’” he says.

A year before, in 1961, international negotiations to ban nuclear testing had taken a turn for the worse. After three years of no testing, the Soviet Union and the U.S. had broken from a voluntary moratorium, with the Soviets conducting 31 experimental blasts, including Tsar Bomba, the largest nuclear bomb ever detonated. It was set off in October 1961, about 13,000 feet above an island in the Arctic Circle.

The space race was in its infancy back then, and the U.S. military didn’t have many qualms about sending almost anything into space. The Department of Defense was in the midst of a separate project to put 500 million copper needles into orbit to try to reflect radio waves and help long-distance communication. There was even a plan, which ultimately fizzled, to set off a nuclear blast on the moon.

Scientists and military figures were keen to know what would happen if a nuclear explosion were set off in space, especially how it might interact with Earth’s magnetosphere. Just two years earlier, America’s first satellite, Explorer 1, accidentally discovered that Earth is encircled by donuts of intense radiation held in place by its magnetic field. They were subsequently named Van Allen belts after James Van Allen, the University of Iowa scientist who discovered them.

The Sounds of the Van Allen Belts
NASA’s Van Allen Probes recorded these chorus waves in space above Earth. These waves are created by electrons spiraling along magnetic field lines around Earth. They then interact with other electrons in the region to accelerate them to higher speeds or push them into Earth’s upper atmosphere.

“As Van Allen said when he discovered the radiation belts, space is not empty, space is radioactive,” says David Sibeck, a scientist for NASA’s Van Allen Space Probes mission. “Van Allen’s discovery was worrying because it said any future spacecraft or astronaut that we send up is going to be exposed to this radiation. And that was a shocker back then.”

Before the test, scientists thought the impact of Starfish Prime on Earth’s radiation belts would be minimal. During a press conference in May 1962, President John F. Kennedy told reporters in a tongue-in-cheek tone, “I know there has been disturbance about the Van Allen belt, but Van Allen says it is not going to affect the belt.”

But Van Allen was wrong.

After four days of delays, waiting for the perfect weather, Starfish Prime was launched on the tip of a Thor rocket from Johnston Atoll, an island about 750 nautical miles southwest of Hawaii. The military also sent up 27 smaller missiles laden with scientific instruments to measure its effects. Airplanes and boats got into position to record the test in as many ways as possible. Flares were set off in hopes of distracting local birds from the blinding flash to come.

Scientists already knew that a nuclear blast in space behaves very differently from one on the ground, says Spriggs. There is no mushroom cloud or double flash. People on the ground don’t feel a shock wave or hear any sound. There’s just a bright ball of plasma, which appears to change color as charged particles from the blast are pushed down into the atmosphere by Earth’s magnetic field. This effect generates colorful artificial auroras, and is why these high-altitude nukes were sometimes called “rainbow bombs.”

As Earth’s magnetic field caught ionized radiation from the Starfish Prime test, it created a new artificial radiation belt that was stronger and longer lasting than scientists had predicted. This unexpected “Starfish belt,” which lingered for at least 10 years, destroyed Telstar 1, the first satellite to broadcast a live television signal, and Ariel-1, Britain’s first satellite.

“It came as a surprise how bad it was, and how long it lasted, and how damaging it was to satellites that flew through that area and died,” Sibeck says.

Still, the test revealed some important information about radiation around Earth. The bomb released a special isotope tracer called cadmium-190. Its original purpose was to track the fallout from the test, but it also became a valuable resource for understanding weather patterns in the upper atmosphere.

The test also helped the U.S. understand how to detect nuclear detonations in space and build a system, later called Vela Hotel, to monitor tests by other countries. Such advances helped make a treaty to ban nukes in space more realistic.

But there are other potent sources of radiation in outer space. There is a very small chance, Sibeck says, that a solar flare at just the right moment could hit the planet with a similar amount of radiation.

“It would have to be bigger than most of the ones that we’ve ever seen during our lifetimes or during the space age,” he says. “But there are [geomagnetic] storms that have been that big, and we know that’s happened because people have seen aurorae at mid-latitudes or even lower at the dawn of technological civilization.”

The largest geomagnetic storm ever recorded, called the Carrington Event, hit Earth in 1859. It caused auroras over Australia and gave electrical shocks to telegraph operators in America. If a similar storm hit today, the consequences would be much more serious than downed telegraph lines.

“A lot more things depend on computer chips and power than they did in 1962. Things in your house, things in your car, communications. It would be much worse,” Sibeck says.

In the unlikely event another nuclear bomb goes off in space, Geoff Reeves, a research fellow at Los Alamos National Laboratory in New Mexico, has been working on a quick way to get rid of radiation belts made from nuclear blasts. In his design, a transmitter mounted on a satellite hits the trapped radiation with specialized AM radio waves, which nudge the charged particles lower into the atmosphere, where they would be harmlessly absorbed.

“So now, if you had a Starfish belt and you had the right technology in space,” Reeves says, “you could get rid of that belt in a couple of weeks.”