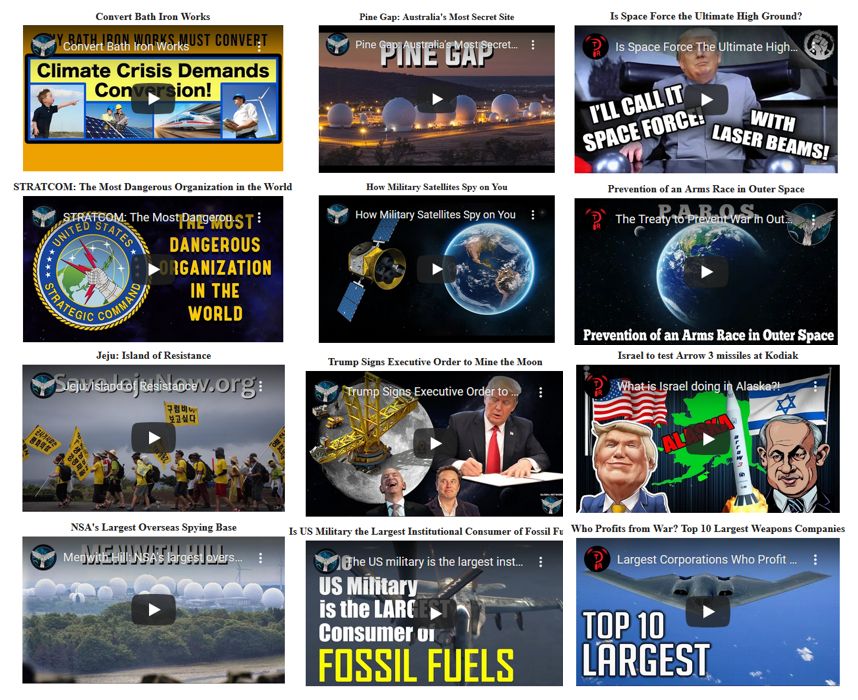 All our videos are available on our Youtube page.

Videos shown here are mainly produced by GN Board Member Will Grifin of “The Peace Report” and others by Regis Tremblay.

Tension in the High North

In this Enviro Close-Up, Bruce Gagnon, coordinator of the Global Network since it was established in 1992, details his impetus in challenging the turning of space into a war zone. He tells of hearing Lt. General Daniel O. Graham, head of the U.S. Strategic Defense Initiative, nicknamed “Star Wars,” declaring as nearly a million people protested in New York City against nuclear weapons, “we are moving into space. They don’t have a clue.” With now the U.S. Space Force having been formed, the push by the U.S. to “control space and dominate space” continues intensely, says Gagnon. And this despite the Outer Space Treaty of 1967, put together by the U.S., the former Soviet Union and Great Britain, setting aside space for peaceful purposes. Gagnon speaks of the aerospace industry seeking to get the money to pay for the U.S. moving into space militarily by taking it from “entitlement programs—Social Security, Medicare, Medicaid and what’s left of the social safety net.”He speaks of the links between space weaponization and the use of nuclear power in space. He discusses the many activities of the Global Network and how people can join in. And although from a military family, he tells of how he became an organizer for the United Farm Workers Union under Cesar Chavez leading to his decades as a peace advocate and organizer.
Antiwar Coalition
The Deadly Connection between Space Militarization and the Climate Crisis

Koohan is a board member of the Global Network and the CODEPINK working group “China is Not Our Enemy.” She formerly served as campaign director of the Asia-Pacific program at the International Forum on Globalization.focused on Pentagon plans to expand military operations in the Pacific in order to encircle and dominate China with more military bases. She dramatically shows here how a ‘high-speed kill web’ will reign terror on Earth via space technology and also that US war games in the Pacific region are currently having massive impacts on sea life. US military operations in the Pacific are expected to kill more than 100,000 sea mammals per year by 2027. This marine holocaust will be called ‘the smart ocean’. Current and future war games will kill the oceans if allowed to continue. Dead oceans equal a dead planet and the word ‘Pacific’ means peace!
Lisa Savage: Nothing to See Here – Information Control & Perception Management Around Climate Impact of Space Programs

GN member Lisa Savage is a retired teacher, organizer, and past candidate for the US Senate. She is a founding member of the Maine Natural Guard and blogs at went2thebridge. A long-time communications activist, Lisa outlines how the US ‘manages information’ in order to sell the militarization of space. She asks why there is so much silence about the climate impacts of militarized space? Lisa illustrates in detail how the Pentagon is not concerned about its impacts on climate crisis but instead is working to ‘manage the unavoidable’. Lisa asks why so few are talking about the growing problem of toxic rocket pollution and ozone depletion from the tens of thousands of rocket launches for 5G (which has military applications for faster surveillance and targeting)?
Entire Webinar

The entire webinar (with all five speakers) can be seen above (1 ½ hours).