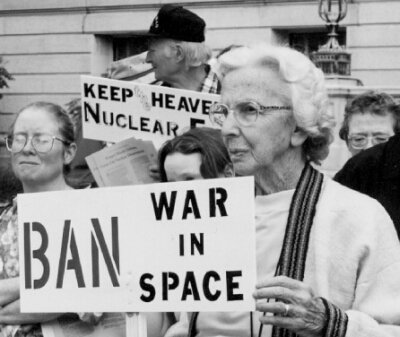 The Global Network was founded in 1992 by the joint efforts of the Florida Coalition for Peace & Justice (FCPJ); Citizens for Peace in Space (Colorado Springs); and New York-based Journalism professor Karl Grossman. The inaugural meeting of the Global Network (GN) was held in Washington D.C. City Council Chambers.

In 1998 Gagnon left the FCPJ wanting to work full time on space issues and began serving as Coordinator of the GN. The GN is governed by a Board of Directors which is elected at its general membership meetings.

The 1997 Cancel Cassini Campaign (that launched 72 pounds of plutonium into space and was featured by the TV program 60 Minutes) was a visible and successful effort.

In 2000 and 2001 the GN organized an International Day of Protest to Stop the Militarization of Space. In 2002 the GN expanded it to an entire week of activities called Keep Space for Peace Week which annually draws events in over a dozen countries.

The general membership meetings/space organizing conferences of the GN have been held in Washington DC (twice); Colorado (twice); New Mexico (twice); Florida; New York (twice); Alabama; Nebraska; Massachusetts; Maine; California; Australia; England (twice); Germany (three times); and South Korea (twice). It is a tradition that each GN meeting should be held in a community that hosts a space related base or production facility.

Today there are about 170 organizations all over the world that are affiliated with the Global Network.

The Global Network has been very successful in helping to create a growing constituency of people around the world who now understand and are active around the space issue.  As more and more nations become involved in developing space technology this expanding base of activists are having an impact in shaping the debate about the need to keep space for peace.

Help us continue by making a donation