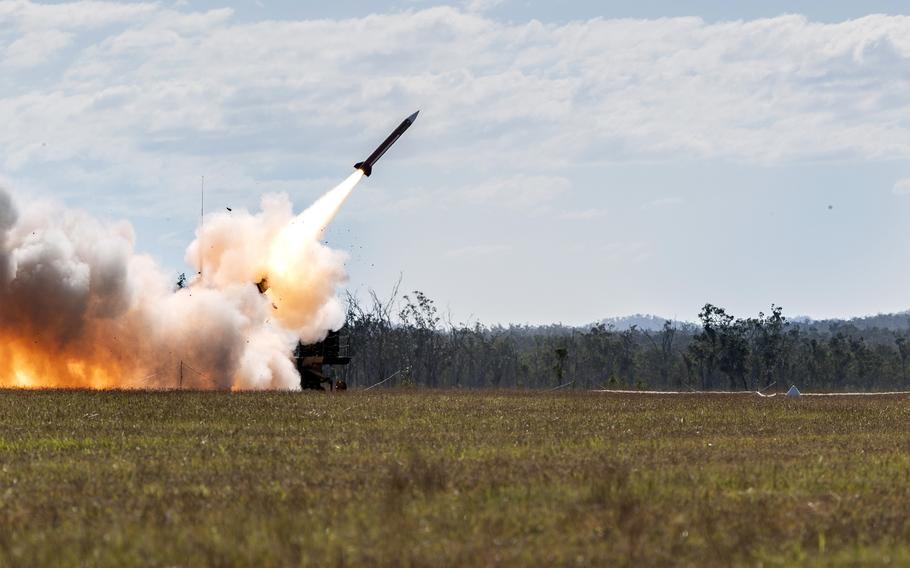 By Seth Robson,
Published by Stars and Stripes, 16 July 2021

The Army is showing off its ability to quickly move defensive and offensive missiles around the Pacific amid threats to U.S. bases in Japan.

The latest demonstration involves the deployment of Patriot missile defense launchers to Australia for the biennial Talisman Sabre exercise.

The Patriot’s debut Down Under follows a series of similar maneuvers this year.

The Army sent a Patriot battery to Japan’s southern island of Amami and a High Mobility Artillery Rocket System to the northern island of Hokkaido during the annual Orient Shield exercise, which ran from June 24 to July 9.

The troops are operating a pair of Patriot launchers, a radar, power plant, control station and brigade and battalion command posts that arrived in Australia by commercial shipping from the United States, he said.

On Friday officials posted photographs and video of the Patriot engaging the drones.

A training objective is to demonstrate the Army’s ability to move around the region, said brigade commander Col. Matt Dalton, of Portland, Conn., who oversees air and missile defense units in Japan, including Okinawa, and on Guam.

“Next month we are moving another [Patriot battery] from Okinawa to Hawaii for another exercise,” he said during a conference call with Sullivan. “We are trying to demonstrate our ability to quickly move our units around the Indo-Pacific to be able to counter any threat that is out there … our ability to move to different locations quickly, set up and establish defense of a particular asset.”

The threat of Chinese and North Korean missiles is an ever-present concern for U.S. commanders in the Far East. As recently as 2017, the North Koreans fired a ballistic missile over northern Japan and tested an intercontinental ballistic missile that experts believed to be capable of striking the U.S. mainland.

The same year, Google Earth images revealed that China, which has a vast arsenal of missiles, was firing them at targets configured to look like U.S. bases in Japan.

This week communist party officials in northwestern China posted a video, shared on Twitter, that threatened nuclear war against Japan if the country attempts to defend Taiwan from an invasion.

Japan and U.S. missile defense is aimed at North Korea and not capable of defeating or deterring China’s overmatch in nuclear strike capabilities, according to Riki Ellison, founder of the Missile Defense Advocacy Alliance, which lobbies for missile defense, deployment and development.

“Japan has to rely on assured deterrence from the U.S. which is U.S. assured nuclear strike on China if China attacks Japan,” he said. “That is what Japan has relied on since the end of World War II.”

Australian Defence Minister Peter Dutton, speaking at the opening ceremony for Talisman Sabre at Royal Australian Air Force Base Amberley Wednesday said it was “obvious” that the ship was spying on the exercise.

The Army will next move its Patriot battery north to practice defending the task force at an undisclosed location, Dalton said.