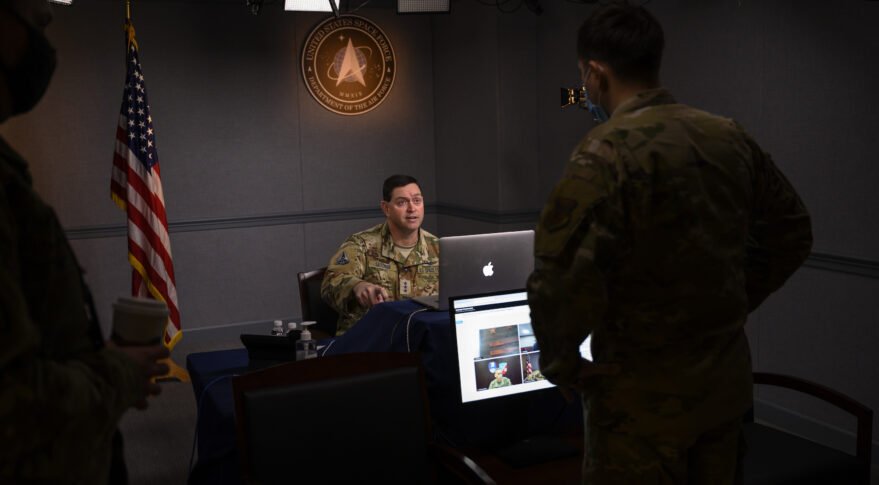 Lt. Gen. Saltzman said one lesson from the cyber attacks in Ukraine is that the main targets are not the satellites but the ground systems

WASHINGTON — Almost three months into the war in Ukraine, it’s still too early to draw conclusions about Russia’s capabilities to disrupt satellite-based communications but one clear takeaway is the importance of protecting the ground systems and network user equipment that provide many entry points for cyber attackers, a senior U.S. Space Force official said May 19.

Space Force Lt. Gen. B. Chance Saltzman, deputy chief of space operations for nuclear and cyber, said he has been briefed on the details of Russian cyber attacks aimed at Ukrainian users of satellite internet services. “One of the observations that I would offer on that is that, if you think the only way to dismantle space capabilities is by shooting down satellites, you’re missing the bigger picture … as these cyber attacks are on ground networks,” Saltzman told reporters at a Defense Writers Group breakfast meeting.

The U.S. State Department last week formally blamed Russia for a late February cyberattack on Viasat’s KA-SAT satellite internet network. The attack disabled user terminals in Ukraine and across Europe that provide internet services to private citizens. Viasat said the satellite itself was not targeted and the attack affected 40,000 user terminals, a small fraction of the hundreds of thousands of customers of the network. Viasat said services have since been restored.

Separately, Elon Musk tweeted this month that Russian hackers have been trying to take down SpaceX’s Starlink broadband service the company is providing in Ukraine.

If the ground infrastructure that supports satellites becomes the main target, it will be important to have “assured networks that are defended by cyber professionals, or we’re not going to be effective in accomplishing our missions,” Saltzman said. “I think that’s a critical point that we’ve learned from this environment.”

Lt. Gen. Stephen Whiting, commander of the U.S. Space Force’s Space Operations Command, told SpaceNews last month that the most likely form of attack facing satellite networks today does not happen in space but on the ground. “Cyberspace is the soft underbelly of our global space networks,” said Whiting.

Saltzman said more time will be needed to evaluate the events in Ukraine as the conflict grinds on. “As a history major from Boston University, I will say some of these things take time and perspective to really draw the lessons. However, there’s clear observations that you can’t ignore.”

He said one of those observations is that satellite services today are nearly impossible to disrupt completely because of the large numbers of satellites that are now operating in orbit, Saltzman said, echoing comments made last week by the Space Force’s vice chief of space operations Gen. David Thompson.