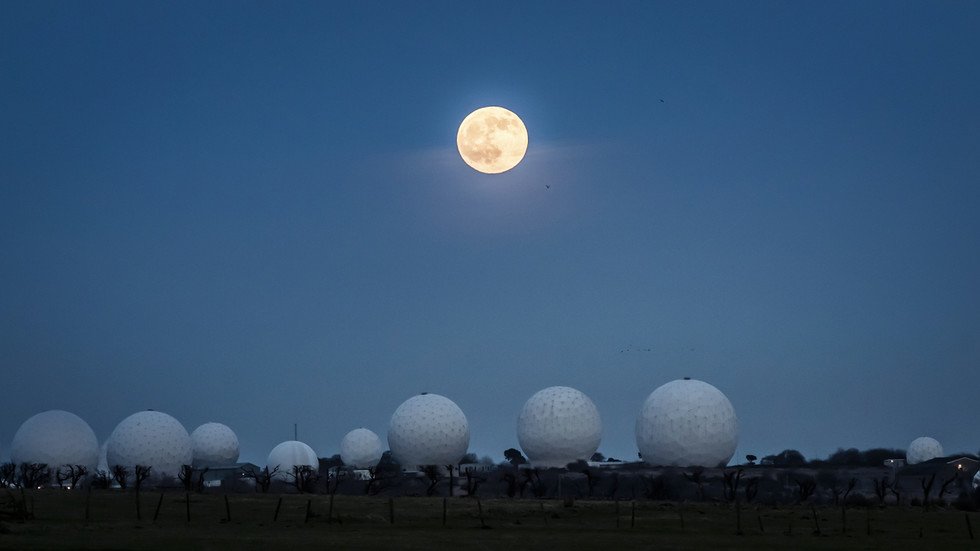 RAF Menwith Hill, America’s largest overseas spy base, located in the UK, is to be expanded, and for reasons we can only guess at – although they’re unlikely to be positive.

A planning application by the UK’s Ministry of Defence (MoD) that was recently submitted to a borough council in England reveals that the controversial Menwith Hill spy base is due to be significantly expanded.

The proposed extension will see a ‘communications container compound’ installed “towards the north of the establishment, outside of the existing base operations area”.

“Development across the site is wide-ranging, comprising a mix of residential, commercial and operational structures set towards the southern edge of the Yorkshire Dales on the edge of the Nidderdale Area of Outstanding Natural Beauty,” a ‘design and access statement’ submitted by the MoD declares.

Menwith Hill Royal Air Force (RAF) base, located near the town of Harrogate, in North Yorkshire, is believed to be a vital component of Washington’s global spying apparatus, which is illegally collecting signals intelligence (SIGINT) in industrial quantities from every corner of the globe.

The base has expanded significantly since London purchased 100 hectares of land on the site specifically for US SIGINT use, back in 1954. Soon, it had more than doubled in size, and, between the 1970s and today, its population of imposing radomes – structures resembling golf balls – has grown in number from just four to more than 30. The station’s staff has also vastly increased during the same period – a testament to the concurrent exponential growth in satellite communications, and thus the significance of SIGINT.

While nominally a UK Royal Air Force base, it is controlled and operated by the US National Security Agency. According to official Whitehall figures, as of November 2017, there were 1,205 personnel at Menwith Hill – the majority of them US military and intelligence personnel, contractors and civilians, although potentially hundreds of Government Communications Headquarters (GCHQ) staffers are also present, helping their foreign counterparts circumvent legislation stateside that prohibits it from spying on US citizens.

Underlining the split loyalties of those who work at Menwith Hill, the planning application was filed by a representative of the MoD’s Defence Infrastructure Organisation, the contact details of which includes both UK government and US Air Force email addresses.

That the number of GCHQ staff deployed at Menwith Hill has never been publicly confirmed reflects the veil of secrecy shrouding the base. London refuses to confirm or deny what if any GCHQ operations are carried out at the site, and a leaked document published by The Intercept in 2016 indicates that Menwith Hill operatives are instructed to maintain the “established cover story” – the existence of which is in itself categorized as top secret – that the base “provides rapid radio relay and conducts communications research”.

“It is important to know the established cover story … and to protect the fact that [Menwith Hill] is an intelligence collection facility. Any reference to satellites being operated or any connection to intelligence-gathering is strictly prohibited,” the file states. “Upon entering the UK and passing through Customs, you may tell the Customs official that you are a US government civilian, US military member, or US contractor going to Menwith Hill to work.”

Whitehall’s omertà involving Menwith Hill was very much on display in February 2020, when Labour MP Alex Sobel asked the MoD whether the base had played any role in the illegal assassination of Iranian Quds Force General Qassem Soleimani via US drone in Iraq the month prior. A minister curtly responded that, “in accordance with long-standing policy, we do not comment on the details of the operations carried out at RAF Menwith Hill in providing intelligence support”.

Sobel’s suspicions were well founded. The Intercept suggests that the US National Security Agency (NSA) had used the installation to aid “a significant number of capture-kill operations” across the Middle East, operating eavesdropping technology that can harvest data from more than 300 million emails and phone calls a day, and pinpointing targets with extraordinary precision. A recent expert study issued by the Menwith Hill Accountability Campaign concluded that it was “probable” the base had provided data that was subsequently used to target and murder Soleimani.

Nine other people were killed in that unlawful strike – a common feature of US drone warfare. In 2014, rights group Reprieve calculated that, in attempting to slay 41 specific, named individuals, Washington had consequently murdered 1,147 people – a rate of 28 deaths for every person targeted. In one case, it reportedly took seven drone strikes for the US to finally hit its target, and, in the process, some 164 people died, including 11 children.

Despite the base’s operations potentially making London complicit in industrial-scale unlawful killing, Harrogate Borough Council approved the planning application for the new extension. Protestations had been lodged by just one local resident, who argued that the proposal was “ambiguous and contains misinformation,” and “may also constitute a health hazard”.

Noting that blueprints provided by the MoD depicted “what appears to be a windowless shipping container”, the resident speculated that the seemingly uninhabitable structure would house new computer systems, not personnel – “although US forces are known to have accommodated prisoners inside such”.

No details of the compound’s purpose were provided in the documents, although tantalisingly, the MoD statement notes that the “operation of the facility will be carried out by the existing staff”, meaning no new jobs will be created after the works are complete. In other words, this new resource will merely extend Menwith Hill’s existing, already sizable bulk-data collection and targeting capabilities.

The installation will be 45m (148ft) tall and 10m (33ft) wide, and comprise a “container and fuel tank within a fenced compound,” and “security lighting and cameras, lighting protection and new tarmac access road.” Constructing it will necessitate the “stripping of vegetation [and] installation of [a] security fence,” a variety of electrical work, the extension of Menwith Hill’s overall transportation network, and the creation of new security camera towers.

Various species of plant, as well as mammal and reptile – including badgers, bats, barn owls, crayfish, great crested newts and otters – are also forecast to be affected by the works.

That more UK citizens haven’t taken umbrage at Menwith Hill’s expansion is nonetheless understandable. After all, to date, the application hasn’t once been mentioned, let alone critically questioned, in the mainstream media, and the country’s elected representatives have likewise failed to publicly utter a word about it.

Indeed, they themselves may well be entirely in the dark as to the upgrade’s purpose. As the resident’s complaint notes, there is “no point” contacting the Defence Infrastructure Organisation representative named in the planning documents, “as he will have no clue why the NSA wants this container or for what it would be used”.

The very existence and operation of RAF Menwith Hill necessitates a strict conspiracy of silence being maintained at all times. After all, if a vast foreign military and intelligence base is to operate with impunity on British soil, it must do so without any transparency, accountability or debate, because the slightest disclosure might mean more opposition – and the American empire couldn’t abide that.