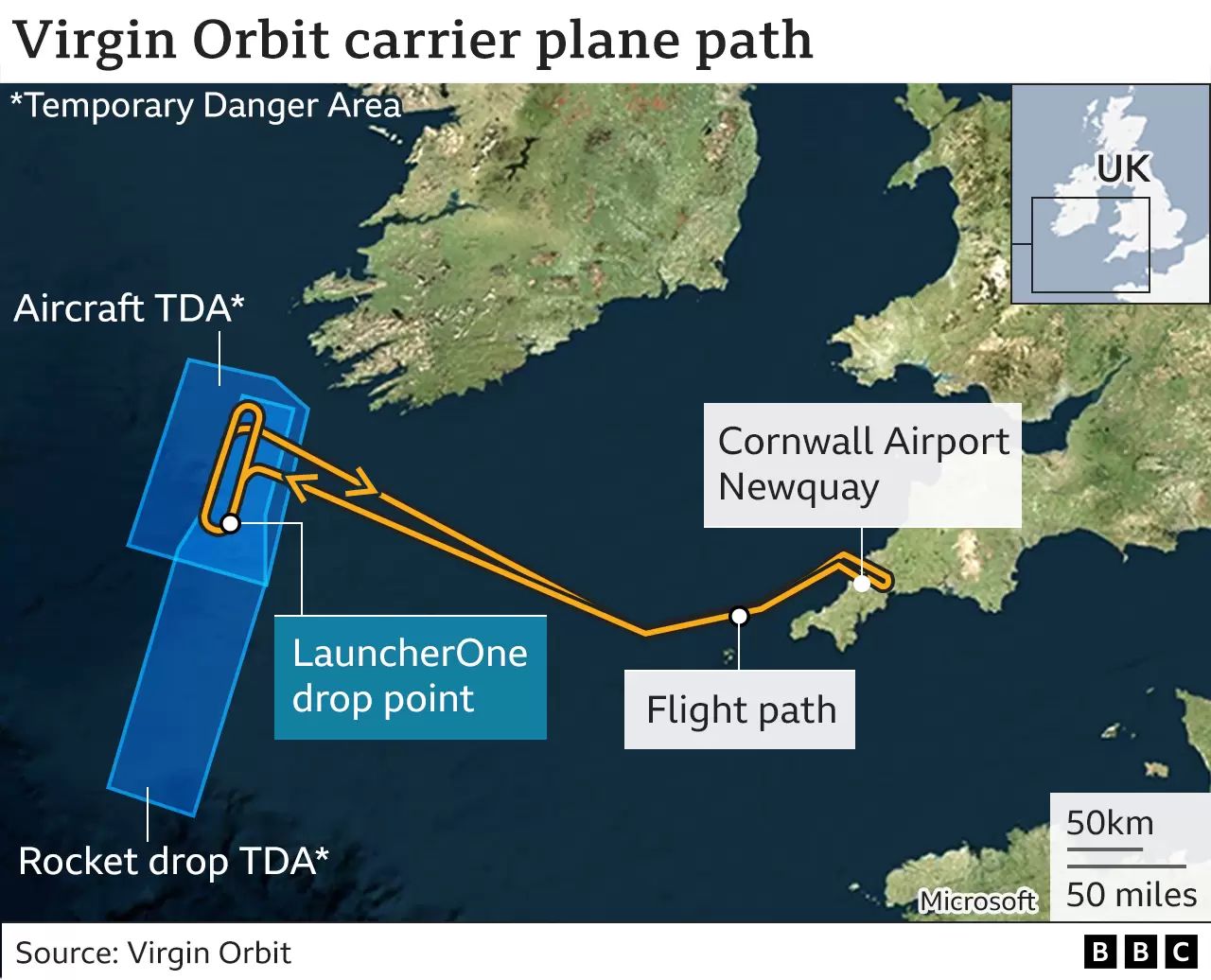 By Colm Keena,
Published by The Irish Times, 9 January 2023

Fishing boats and other vessels have been warned to avoid an area off the southwest coast of Ireland from Monday night because of the danger of being hit by falling debris from a rocket due to be launched from a Virgin Orbit jumbo jet.

The bottle-shaped area of the Celtic Sea from which seafarers are being advised to keep out stretches from 60km off the coast to approximately 300km, in a southern direction. The warning applies between 10pm Monday and 1am on Tuesday.

The Irish Aviation Authority (IAA) has issued a permit and its counterpart in the United Kingdom has issued licences to the US-based company to conduct the operation.

The jet carrying the rocket will take off from a spaceport in Cornwall, England, and will be guided through Irish and international airspace by the Irish air traffic control service to the designated airspace where the rocket will be ignited. The Irish controllers will be working with their counterparts in Spain and Portugal.

The rocket is to carry nine industry and defence satellites that are to orbit the Earth at a height of approximately 500km.

If successful, the launch will be the first of its kind in western Europe. Analysts expect thousands of satellites to be launched into space in the coming decade from sites in Europe and elsewhere as part of a rapidly developing launch market.

Virgin Orbit has already conducted several such launches from the United States, using a modified Boeing 747 called Cosmic Girl that carries the rockets beneath its wing.

In a notice issued on January 4th, the Department of Transport said that if the launch proceeds as planned, no debris will enter the marine hazard area. “However, there is a low probability for the vehicle to produce dangerous debris if a mishap were to occur.”

In its notice to aviation operators, the IAA said the rocket launch “will take place in high seas [international] airspace where Ireland provides the air traffic control service. On entering Irish-controlled airspace, Irish air traffic controllers will guide the launch aircraft, Cosmic Girl, to a designated volume of airspace, within which the rocket, Launcher One, will be ignited and will take flight.”

Speaking on RTÉ radio, Patrick Murphy of the Irish South and West Fish Producers Association, said “mishap” meant an explosion “and everything that’s up there comes flying down on top of the heads of people in the area”.

He called on Minister for Transport Eamon Ryan to do more to protect the interests of the Irish fishing sector and queried why the rocket launch was not happening in UK airspace.

The UK’s civil aviation authority issued the required launch licences to Virgin Orbit on December 21st, following delays caused by difficulties in the company reaching the licence terms and amid reports of tensions between the company and the authority.

“Virgin Orbit met the licensing requirements having demonstrated to the UK civil aviation authority it has taken all reasonable steps to ensure safety risks arising from launch activities are as low as reasonably practicable,” said the UK authority.

“Virgin Orbit also met other appropriate security and environmental aspects required for launch. Virgin Orbit also received its range control licence from the space regulator, which enables the company to issue warning notices to keep people out of hazardous areas and monitor the progress of the rocket.”

The company said granting of the licences represented a significant step forward for its historic launch operation and reflected the UK authority’s concurrence that all reasonable steps had been taken to ensure “the desired safety, security, and environmental stewardship of what is expected to be the first orbital launch ever conducted from western Europe”.

In the UK the Campaign for Nuclear Disarmament and Drone Wars UK have declared their opposition to the launch, highlighting the inclusion of military and dual-use satellites in the operation.