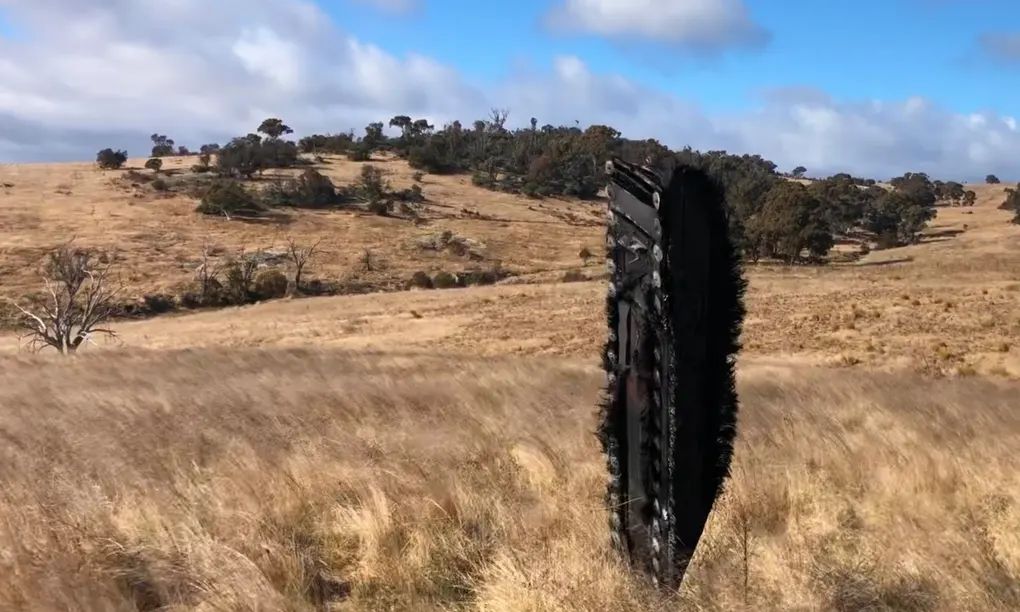 By Natasha May,
Published by the Guardian, 1 August 2022

The Australian Space Agency is investigating space debris found in farmland in the Snowy Mountains in southern NSW, after being notified by an astrophysicist who believes it to be from a SpaceX mission.

Brad Tucker, an astrophysicist at the Australian National University, says he often gets calls from people who believe they’ve found space junk – and they are normally easy to rule out.

“This was different,” he said.

Tucker received a call last Thursday from Mick Miners and Jock Wallace, two sheep farmers in the small town of Dalgety, who reported having found a scorched object. Their report matched a SpaceX spacecraft which re-entered the earth’s atmosphere at 7am on 9 July, 20 months after its launch in November 2020.

The farmers were connected to Tucker via ABC local radio, where he is a regular guest to talk about space.

The SpaceX Dragon capsule was observed breaking apart above the area of Australia where the farmers found the debris. Its re-entry was seen and heard by people from Canberra to Bendigo, with many sharing it on social media.

Tucker drove for two hours to Miners’ farm to see if the object they had found was the unpressurised trunk of the capsule – a structure that is needed for take-off but dumped prior to re-entry.

His first impression, he said, was something that “kind of just looks like a burnt tree … and then you come up to it, it’s like this alien obelisk almost”.

“I knew without a doubt this was a very real incident and a very real piece just sticking out of the ground.”

Tucker said he could tell it was real because it was made of composite materials designed to withstand heat, including woven carbon fibre for insulation. It also showed clear signs of scorching due to re-entry.

One of the panels of the debris appeared to have had a part number. “It’s a very easy way for SpaceX to confirm it because there’s a label on it,” he says.

SpaceX has not yet confirmed to Tucker that the debris belonged to SpaceX Dragon, and has not yet responded to a request from Guardian Australia.

The debris has been assessed by the Australian Space Agency (ASA).

A spokesperson from ASA told Guardian Australia their technical experts had “visited a remote part of the Snowy Mountains area of southern New South Wales, after the discovery of space debris”.

“The agency is actively working to support formal identification of the objects, and is engaging with our counterparts in the US, as well as other parts of the commonwealth and local authorities as appropriate,” the spokesperson said.

Tucker says space junk is intended to land in the ocean, and it’s a “super rare” occurrence for it to land in a populated area.

“It’s only happened a handful of times,” he says. “In 1979, the US Space station Skylab crashed over Western Australia in the first instance. There was a nuclear power Russian satellite that crashed in Canada in the 80s. And then China had a rocket booster that crashed and landed in West Africa a couple of years ago. SpaceX had part of a booster crash in the US state of Washington last year. And now this.”

It’s a short list, but the incidents are becoming more frequent.

Dr Sara Webb, an astrophysicist at Swinburne University, agreed with Tucker’s assessment that the debris was consistent with a SpaceX mission.

Webb said that this event and the Chinese booster rocket, which made an uncontrolled return to Earth on Saturday, underscored the importance of tracking space debris.

The Chinese booster rocket was particularly large, she said.

“Even if 80% of it burnt up, you’re still left with basically a car coming out of the atmosphere,” she said.

The spokesperson for ASA said the organisation was “committed to the long-term sustainability of outer space activities, including debris mitigation”.

“This includes the ongoing development of a Space Situational Awareness and Debris Mitigation roadmap, to guide opportunities in this important area,” the ASA said.