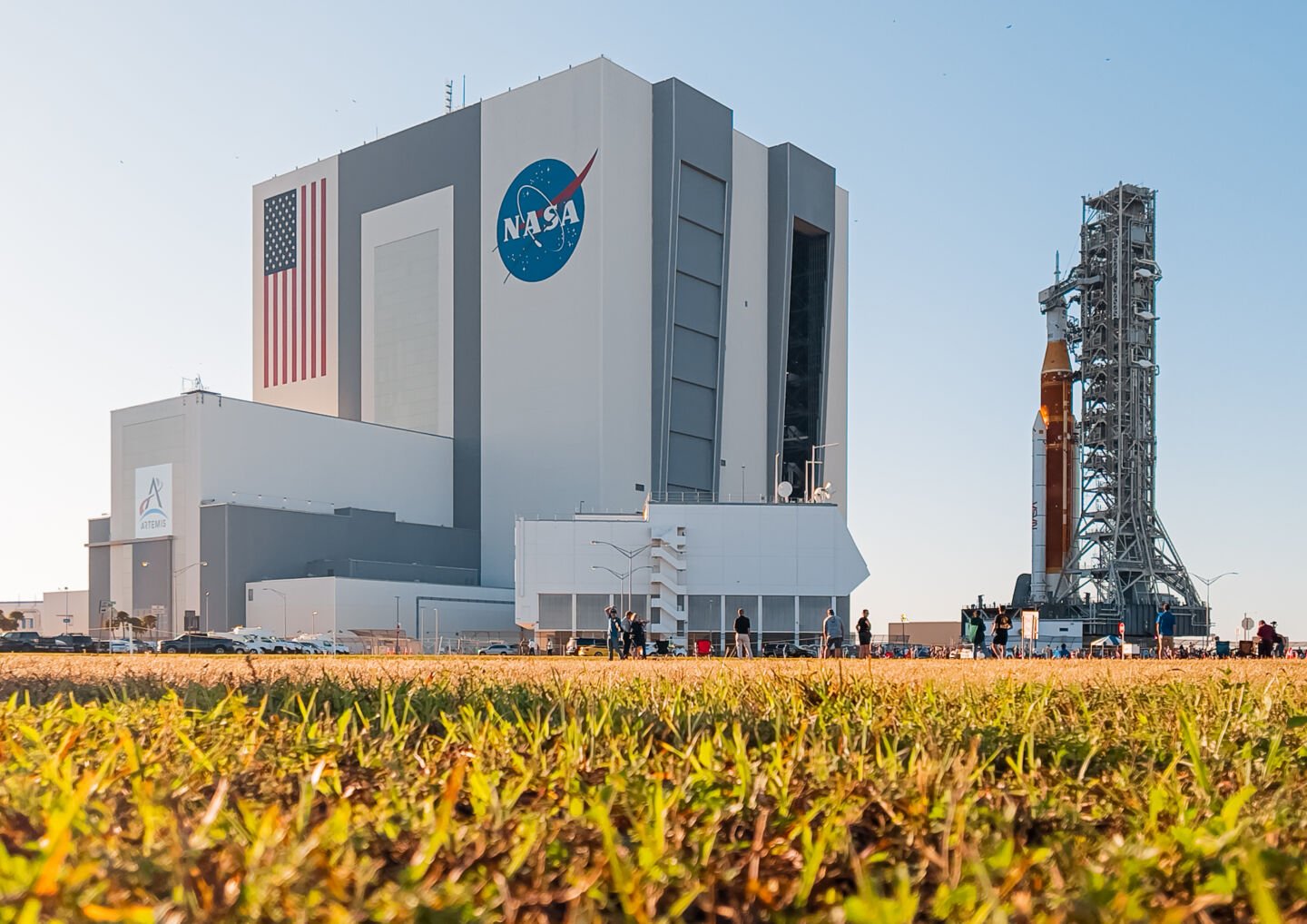 “The program is an economic engine for America.”

On Friday morning, NASA’s titanic Space Launch System reached the launch pad. The rocket is not yet ready to fly, and it may not lift off the planet for several more months. But as the fully assembled, skyscraper-sized rocket rolled into a serene Florida evening on Thursday at Kennedy Space Center, no one could deny that it is finally here.

Frankly, it is hard to know how to feel about this rocket. Certainly, one cannot help but be awed by a rocket that is as tall as a US football field is long. Designing, building, and testing such a large and complex machine represents a significant engineering achievement. But it’s impossible to have a rational discussion about the Space Launch System rocket and its payload, the Orion spacecraft, without considering its enormous expense, ongoing delays, and looming obsolescence.

One thing seems clear: although this fully stacked SLS rocket and Orion crew capsule have set the stage for the uncrewed Artemis I test launch later this year, the rollout does not mark the end of the beginning for this launch system. Rather, it’s the beginning of the end. This is probably the last gasp of the Apollo era of NASA that has gripped the space agency for six decades.

The SLS rocket and Orion have appeared in NASA PowerPoint presentations for so long that it’s good to finally see the real thing. The rocket and spacecraft looked brilliant as they rolled into the sunset after moving out of the Vehicle Assembly Building at Kennedy Space Center. About 11 hours later, the stack arrived at Launch Complex 39B, seemingly no worse for wear.

During the next week or so, engineers and technicians will prepare the vehicle for a critical fueling test known as a “wet dress rehearsal,” during which the rocket will be loaded with chilled propellants and brought down to within seconds of engine ignition. This is a not-insignificant test, as it will involve a complicated interplay between the newly assembled rocket, spacecraft, launch tower, ground systems, and flight software.

If all goes well, the test should happen during the first week of April. It will likely take several days, or perhaps longer if technical issues occur. After this test, the rocket will roll back to the Vehicle Assembly Building to be outfitted with pyrotechnics and for other final tasks. The rocket could potentially be back on the pad for a launch attempt in early June.

This is a big, brawny rocket that is 100 percent American made. If the SLS rocket passes its flight test later this year, it will give NASA and the Western world a powerful heavy-lift vehicle (Europe is a partner on the Orion spacecraft, and dozens of nations have signed up for the space agency’s Artemis Moon program). And at least until SpaceX’s Starship vehicle comes online, the SLS rocket will provide an unparalleled heavy-lift capability for exploration purposes.

Many people have worked very hard to get the rocket and spacecraft to this point. This is no small feat in a large bureaucracy like NASA. Congratulations, all.

It has been a long road to reach this point. NASA’s modern deep space exploration program began back in 2004, when President Bush directed NASA to go to the Moon and then Mars. Since then, some of the pieces have changed, but the overall thrust has remained the same. The Orion program started in 2005, and so did work on the Ares 1 rocket. The rocket has since changed to the SLS vehicle, mandated by Congress in 2011.

Since 2005, NASA has spent more than $50 billion developing these deep space exploration “capabilities.” And these are just development costs. The operational costs of this vehicle are staggering. Recently, NASA’s inspector general revealed that the cost of flying one Orion and SLS per year was $4.1 billion. This price tag, Inspector General Paul Martin said, was “unsustainable” for an exploration program.

When Congress created the SLS in 2011, it directed NASA to fly the rocket before the end of 2016. The SLS will now launch no earlier than June 2022, or more than five years behind schedule. For the Orion spacecraft, the situation is arguably worse. The spacecraft was intended to fly humans into deep space, and it’s unlikely to do so before at least 2024 with the Artemis II mission. This means NASA will have spent two decades developing a vehicle that is essentially a larger, modernized version of the Apollo capsule.

Why? Because this is the way Congress wants it. Both the Obama and Trump administrations made attempts to at least scale back funding for the SLS rocket. Congress never budged. Former Senator Bill Nelson, a key architect of the SLS rocket who now runs NASA, alluded to this in his remarks on Thursday evening.

The Artemis I mission, he said, has hired contractors across all 50 states. “The program is an economic engine for America,” Nelson said. “In 2019 alone, it supported 70,000 good-paying jobs across the country.”

With the SLS rocket and Orion, NASA is essentially replicating the large launch architecture the agency employed in the 1960s to send a few humans to the Moon at enormous cost. That’s fine if your goal is to make a geopolitical statement, as America sought to do during the Cold War. But pretty much everyone agrees that returning to the Moon is not the goal but rather the first step toward a sustainable presence in deep space, first at the Moon and eventually farther out.

NASA could have just bought launch services from the private sector at a significant discount. The US commercial space industry—notably, SpaceX and United Launch Alliance but including other companies as well—has gotten very good at building rockets. This would have freed NASA to use its exploration dollars for other purposes. During the last decade, instead of largely ignoring technologies such as in-space fuel depots, propellant transfer in orbit, and space-based propulsion, NASA could have invested heavily in them to reduce travel time between planets and to take advantage of much cheaper commercial launch vehicles.

The true cost of the SLS rocket may therefore not be the tens of billions of dollars NASA has spent to develop the rocket but rather the agency holding back the technologies that could enable lower-cost exploration and safer, faster transit to the Moon, Mars, and beyond.

NASA has built and launched four rockets in its history: the Saturn I, the Saturn V, the space shuttle, and Ares I. The Saturn V rocket carried humans to the Moon, and the space shuttle helped establish humanity’s future in low Earth orbit by facilitating the assembly of the International Space Station. Ares I flew just one time—on a test mission that was a partial failure—before being canceled for running over its budget and falling far behind schedule.

The Space Launch System is probably the last rocket that NASA will develop in-house. In some ways, it’s the culmination of all that has come before it. The SLS rocket and Orion spacecraft rolled to the launch pad on a “crawler” that was first built in the 1960s for the Apollo program. The SLS rocket uses space shuttle main engines, and its solid rocket boosters are derived from the shuttle program.

As brilliant as the rocket and spacecraft may have looked on Thursday night in Florida, its journey into the sunset was more than metaphorical. SpaceX’s flight-proven Falcon Heavy rocket, which has a lift capacity of more than half the SLS rocket, flies for less than a tenth of the SLS rocket’s cost. And coming soon is SpaceX’s Starship vehicle.

No one is sure how quickly or how well Starship will work. Whereas the SLS rocket looked backward for its technology, SpaceX is seeking to leap forward with an even larger, fully reusable vehicle with more lift capacity. A lot of Starship’s technology is experimental and cutting edge, so there will be some hiccups along the way. But the pain will be worth the ultimate reward—an efficient rocket and spacecraft that can fly often for hundreds or even tens of millions of dollars.

When SpaceX finally tests, flies, and produces a reliable version of Starship in the next few years, it will disrupt the global launch industry. Previously, the limiting factor for what one might do in space has been cost. At a price of $4.1 billion per mission, the SLS and Orion embody this concept. When Starship delivers, it will change the fundamental question behind our exploration program from “what can we afford to do in space?” to “what should we do in space?”

Later this summer, if all goes well, we should enjoy the spectacular show that the SLS rocket will put on when it launches Orion from Florida. There probably won’t be too many more.