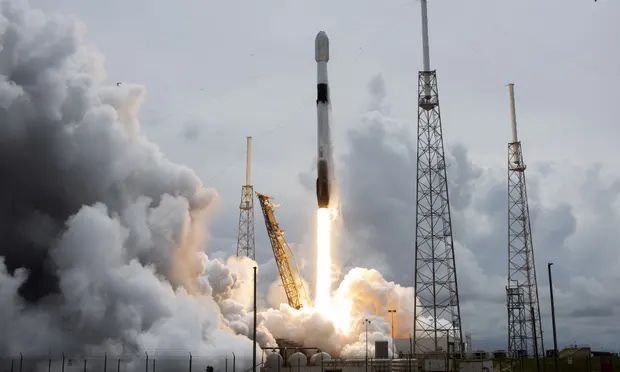 By Katharine Gammon,
Published by the Guardian, 19 July 2021

Last week Virgin Galactic took Richard Branson past the edge of space, roughly 86 km up – part of a new space race with the Amazon billionaire Jeff Bezos, who aims to make a similar journey on Tuesday.

Both very wealthy businessmen hope to vastly expand the number of people in space. “We’re here to make space more accessible to all,” said Branson, shortly after his flight. “Welcome to the dawn of a new space age.”

The Japanese billionaire Yusaku Maezawa spent an undisclosed sum of money with SpaceX in 2018 for a possible future private trip around the moon and back. And this June, an anonymous space lover paid $28m to fly on Blue Origin’s New Shepard with Bezos – though later backed out due to a “scheduling conflict”.

But this launch of a new private space industry that is cultivating tourism and popular use could come with vast environmental costs, says Eloise Marais, an associate professor of physical geography at University College London. Marais studies the impact of fuels and industries on the atmosphere.

When rockets launch into space, they require a huge amount of propellants to make it out of the Earth’s atmosphere. For SpaceX’s Falcon 9 rocket, it is kerosene, and for Nasa it is liquid hydrogen in their new Space Launch System. Those fuels emit a variety of substances into the atmosphere, including carbon dioxide, water, chlorine and other chemicals.

The carbon emissions from rockets are small compared with the aircraft industry, she says. But they are increasing at nearly 5.6% a year, and Marais has been running a simulation for a decade, to figure out at what point will they compete with traditional sources we are familiar with.

“For one long-haul plane flight it’s one to three tons of carbon dioxide [per passenger],” says Marais. For one rocket launch it’s 200-300 tonnes of carbon dioxide carrying 4 or so passengers – close on two orders of magnitude more, according to Marais. “So it doesn’t need to grow that much more to compete with other sources.”

Right now, the number of rocket flights is very small: in the whole of 2020, for instance, there were 114 attempted orbital launches in the world, according to Nasa. That compares with the airline industry’s more than 100,000 flights each day on average.

Closer to the ground, all fuels emit huge amounts of heat, which can add ozone to the troposphere, where it acts like a greenhouse gas and retains heat. In addition to carbon dioxide, fuels like kerosene and methane also produce soot. And in the upper atmosphere, the ozone layer can be destroyed by the combination of elements from burning fuels.

“While there are a number of environmental impacts resulting from the launch of space vehicles, the depletion of stratospheric ozone is the most studied and most immediately concerning,” wrote Jessica Dallas, a senior policy adviser at the New Zealand Space Agency, in an analysis of research on space launch emissions published last year.

Another report from 2019 penned by the Center for Space Policy and Strategy likened the space emissions problem to that of space debris, which the authors say creates an existential risk to the industry. “Today, launch vehicle emissions present a distinctive echo of the space debris problem. Rocket engine exhaust emitted into the stratosphere during ascent to orbit adversely impacts the global atmosphere,” they wrote.

A new market report estimates that the global suborbital transportation and space tourism market is estimated to reach $2.58bn in 2031, growing 17.15% each year of the next decade.

“The major driving factor for the market’s robustness will be focused efforts to enable space transportation, emerging startups in suborbital transportation, and increasing developments in low-cost launching sites,” the report says.

Several companies, including SpaceX, Blue Origin and Virgin Galactic, have been focusing on developing platforms such as rocket-powered suborbital vehicles that will enable the industry to carry out suborbital transportation and space tourism.

People have pointed out that the money these billionaires have poured into space technology could be invested in making life better on our planet, where wildfires, heatwaves and other climate disasters are becoming more frequent as the globe warms up in the climate crisis.

“Is anyone else alarmed that billionaires are having their own private space race while record-breaking heatwaves are sparking a ‘fire-breathing dragon of clouds’ and cooking sea creatures to death in their shells?” the former US Labor Secretary Robert Reich tweeted last week.

Marais says that there is always an element of excitement to new developments in space – but it’s still possible to be responsible while doing something exciting. She urges caution as the space tourism industry grows, and says there are currently no international rules around the kinds of fuels used and their impact on the environment. “We have no regulations currently around rocket emissions,” she says. “The time to act is now – while the billionaires are still buying their tickets.”