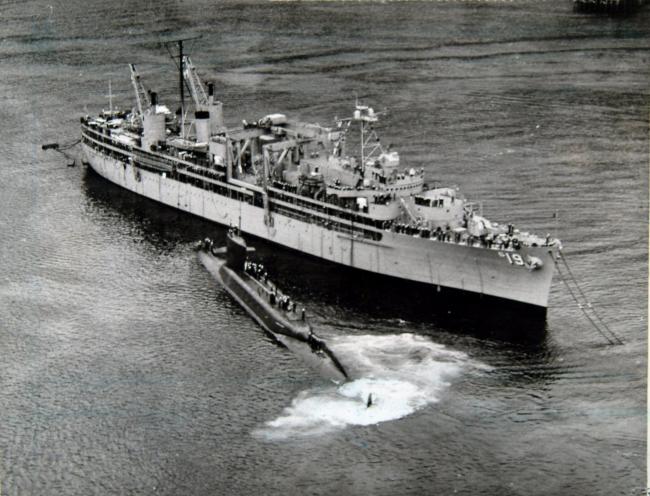 By George Kerevan,
Published by the National, 19 July 2021

IT is a product of Scotland’s subordinate status that when the great powers clash it is Caledonia that instantly becomes the proxy front line.

Sixty years ago, on March 3, 1961, at the height of the Cold War, the US Navy submarine depot ship Proteus docked in the Holy Loch on the Clyde. Its purpose was to act as a permanent mother ship for American Polaris submarines and their nuclear-tipped missiles.

This forward base provided the Pentagon with two advantages. First, it allowed American subs to slip quickly out to their Arctic firing stations close to the Russian mainland. And secondly, it had the happy effect of making Glasgow the main target for any Soviet first or retaliatory strike, rather than the US east coast.

This proved handy within a year. For 1962 saw the Cuban missile crisis, the nearest the world has ever been to thermonuclear annihilation. A Scottish Polaris base meant America could take bigger risks in threatening Moscow.

Why are these events of 60 years ago relevant today? Because there is gathering a new and possibly terminal arms race in outer space, between declining America and resurgent China. And where does the Pentagon want to position its forward bases yet again? You have guessed – little, expendable Scotland.

Last week, UK Defence Secretary Ben Wallace, with military top brass in tow, visited the US Space and Missile Systems Centre in Los Angeles, California. This is where the Pentagon is developing its next generation of weapons to fight China and Russia in deep space. During the visit, Wallace was briefed on a project called the Deep Space Advanced Radar Capability – or DARC. Most satellites are in low Earth orbit, around 100 kilometres above our heads and visible to the naked eye as they streak across the sky. It is illegal under international law, but the big powers (including India and Israel) have the offensive means to knock down these low-orbit satellites at will.

However, there is a zone of deep space some 35,000km further out, where a satellite’s orbital speed matches the rotation of the Earth. As a result, the satellite will appear to be stationary over a particular spot on the Earth beneath. This is useful for uninterrupted communications.

The US GPS satellites linked to your mobile phone are in this geosynchronous orbit, known as GSO. But GSO is also good for spying and early warning of an incoming missile attack. So GSO has become the next potential battleground. America’s new DARC radar system is designed to probe what China and Russia are doing in GSO space.

The Pentagon wants to build three DARC radar complexes spread around the globe so as to sweep the entire GSO band of space. The proposed locations are in Texas, Australia and the UK. But where in the UK? During the Wallace visit to the Space and Missile Centre in Los Angeles, a certain Lt Col Jack Walker (of the newly created US Space Force) informed an accompanying BBC reporter that the United States was “in discussion” with the UK about putting the DARC radars “possibly in Scotland or further south”.

I find it significant that a lowly lieutenant colonel doing PR work during the UK Defence Secretary’s visit should be mentioning Scotland as a site for the European end of the DARC radar system. This suggests that advance planning to locate DARC is well in hand. Such was confirmed by the boss of the RAF, Sir Michael Wigston, who was on hand to tell the BBC reporter that “right now the UK is focused on understanding what’s going on in the dark corners of space” and (more worryingly) that the next war could be won or lost in space.

But DARC is only a radar, I hear sceptics declare. Actually, it is a very big radar. According to the ever-helpful Lt Col Walker, each DARC facility will house “anywhere from 10 to 15 parabolic antenna for tracking and four to six for transmitting” and cover an area of about 1km square. Add the necessary security and support facilities, and that adds up to a chunk of Scottish real estate.

CERTAINLY, the initial DARC project is about giving the Pentagon a new ability to “see” what China is up to in geosynchronous orbit. Current radar technology is only good out to about 12,000km, or one-third of the way to GSO. Unfortunately, the pesky thing about GSO satellites is that they have to be manoeuvrable (using onboard rockets) to get into correct position. Which means you can always use the onboard rockets to move them again.

This year, China has been putting more military satellites into GSO position. The Pentagon is desperate to find out where they are.

At present, no nation has developed the capability to destroy enemy satellites in far GSO orbit. However, the Pentagon is worried by China’s recent GSO satellites might be manoeuvrable enough to slide up to a US GPS satellite and … kerpow! Which means that the DARC radar chain is only a first step towards the Pentagon creating its own offensive capability in the GSO band of deep space. That puts any Scottish DARC radar base in the front line in any future Sino-American conflict – just as the Clyde Polaris base was 60 years ago.

The conclusion is obvious: The SNP Government must oppose any DARC radar station being built on Scottish soil. There are alternative locations including the RAF base at Menwith Hill in Yorkshire, where the Americans already have satellite-tracking facilities. It goes without saying that if there is an attempt to build a DARC radar in Scotland, then Scottish CND and the peace movement should blockade the site and disrupt construction.

Sixty years ago, the arrival of the Proteus in the Holy Loch – followed five days later by the first Polaris submarine, the Patrick Henry – was met by large demonstrations, mass blockades and joyfully successful efforts to board the American vessels. The first demo at the entrance to the US Navy pier at Ardnadam saw 289 arrests. Ultimately, people in Scotland viewed the imposition of the Polaris base as a sign Scotland was considered expendable by London governments. This in turn prompted the rise of the modern independence movement.

Recently, news about space has tended to focus on Richard Branson’s vanity tourist trips to the edge of the atmosphere, or Elon Musk’s ludicrous plan to colonise Mars. Behind all this hype, there is a DARC and darker military agenda. It is no surprise that Defence Secretary Wallace and the UK chiefs of staff also met Musk and his SpaceX people during their American jaunt. Turns out, the SpaceX Starship is just what you need to launch an offensive strike at enemy satellites in GSO.

There’s a lot of daft talk in Scotland about spaceports and the Highlands being the gateway to the stars. This reflects an inferiority complex that we need to follow other nation’s agendas, even if these are leading to a war in space.

Scotland is surrounded by deep oceans full of potential for food and ores. Oceans that need protecting as well as exploring. That should be our destiny.