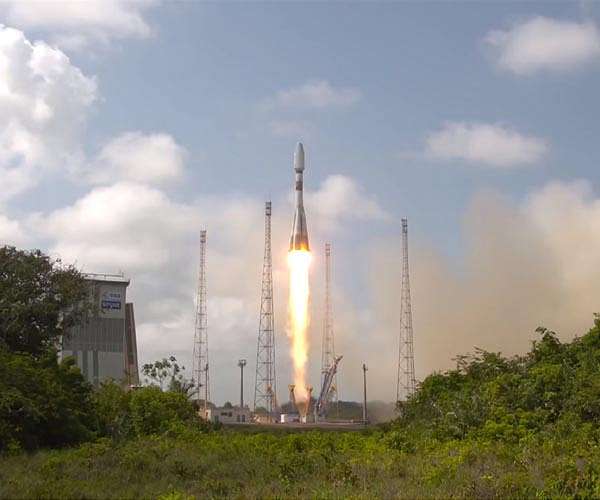 Paris (AFP) – Russia’s invasion of Ukraine has had repercussions not just around the world but beyond it, bringing to a grinding halt joint space projects between Moscow and the West that began in the aftermath of the Cold War.

When the head of Russian space agency Roscosmos Dmitry Rogozin announced on Thursday that Russia would stop supplying the United States with rocket engines, his message was blunt: “Let them fly to space on their broomsticks.”

He also said Roscosmos would dramatically “adjust” its programme to prioritise making military satellites, adding that all future spacecraft will be “dual purpose” — with one of those purposes in the Russian defence ministry’s interest.

In response to the sweeping sanctions imposed on Russia by most of the Western world, Roscosmos also told the German Aerospace Center that it will no longer take part in “joint space experiments” on the International Space Station.

Roscosmos had earlier suspended launches from Europe’s spaceport in French Guiana’s Kourou, which use Russian Soyuz rockets, withdrawing around a hundred of its workers.

Another victim is the Rosalind Franklin rover, whose launch under the joint Russian-European ExoMars mission had already been postponed from 2020 due to the pandemic.

The rover, which is designed to drill into Mars to search for signs of life, is now “very unlikely” to launch this year, the European Space Agency said.

The ESA’s rover was to be launched from the Baikonur Cosmodrome in Kazakhstan by a Russian rocket, then taken down to the Martian soil by Russia’s Kazachok lander.

Getting the Rosalind Franklin, named after an English chemist and DNA pioneer, into space without Russian help would require huge revisions — and the window to launch only comes around every two years.

“It is heartbreaking for science and scientists who have built up links over the years and invested years of work,” said Isabelle Sourbes-Verger, a specialist in space policy at the French National Centre for Scientific Research.

ExoMars had symbolised the culmination of a partnership between Europe and Russia that began in 1996, she told AFP.

“After the collapse of the Eastern Bloc and the break-up of the USSR, Europe and the US naturally sought to make room for the Russians” in their space plans, an analyst in the European space sector said on condition of anonymity.

No side wanted the knowledge and expertise of such a great space power to go to waste.

Its experience with the Mir space station significantly contributed to the development of the ISS, the greatest space collaboration between the West and Russia, where astronauts and cosmonauts have long lived and worked side-by-side.

The idea was that civilian space cooperation would be a “way of bringing nations together”, the analyst said.

On a commercial level, Russia has “done everything to facilitate access to space”, including offering its Soyuz rockets to the international market, the analyst added.

Europe was “particularly proud” to have reached a deal that has seen its Arianespace work with Roscosmos since 2011 to launch Soyuz rockets from Kourou and Baikonur, the analyst said.

However, relations became strained over the years, particularly since Russia’s annexation of Crimea from Ukraine in 2014.

Then came the war.

Just how much the war and sanctions will affect space cooperation between Russia and the West remains to be seen.

Russia’s declaration that it has ended joint space experiments with Germany on the ISS has put German astronaut Matthias Maurer — who is currently onboard the station — in a tight spot.

NASA said this week it is exploring ways to keep the ISS in orbit with Russian help, after Roscosmos chief Rogozin raised the prospect of pulling out in response to US sanctions.

But Kathy Lueders, who heads NASA’s human spaceflight programme, said Monday that operations on the ISS were proceeding “nominally” and “we’re not getting any indications at a working level that our counterparts are not committed”.

She said it would be “very difficult for us to be operating on our own”, adding that “it would be a sad day for international operations if we can’t continue to peacefully operate in space.”

Scientific discovery about space is also expected to be a victim of the war.

As of Friday, more than 7,400 Russian scientists and academics had signed an open letter lambasting the invasion, saying that “many years spent strengthening Russia’s reputation as a leading centre” of science in the world “have been completely scuppered”.