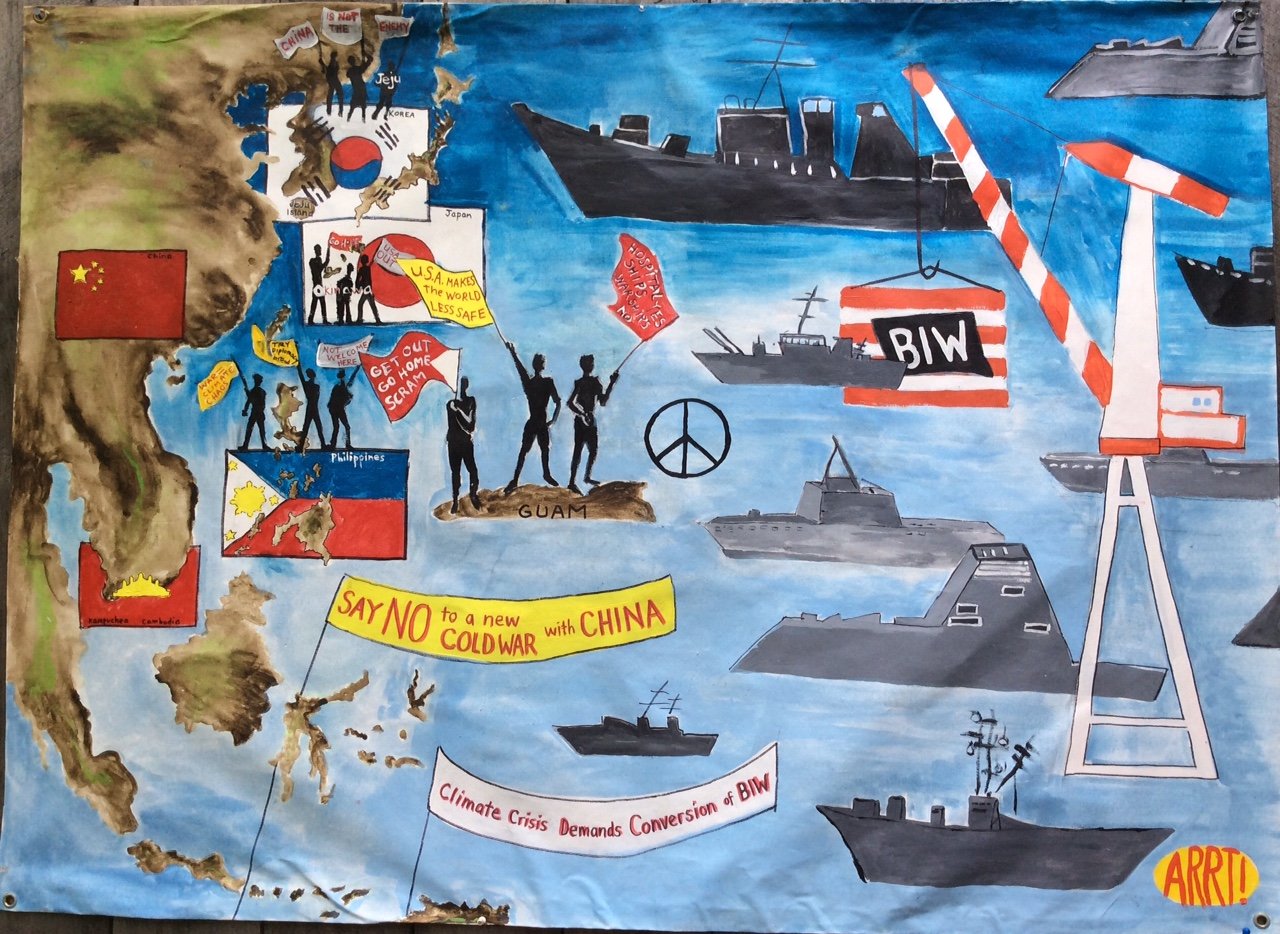 Another great banner made by ARRT! (Artist Rapid Response Team) here in Maine.

The group is led by long-revered artist/activist Natasha Mayers who has been a regular at the protests at Bath Iron Works (BIW) where naval Aegis destroyers are built.

The banner was conceived with this question in mind: Where do these destroyers go when they leave Bath? How do they impact the rest of the world politically and environmentally?

BIW Aegis destroyers do not actually carry nuclear weapons. They carry cruise missiles that could be outfitted with nuclear warheads. They are primarily first-strike attack weapons.

Aegis also carry SM-3 interceptor missiles whose job is to take out any retaliatory strikes after the US launches a first-strike attack on China or Russia.  (So-called ‘missile defense’.) SM-3 missiles are not nuclear – they are called ‘kinetic’ which means they crash into the other missiles and they both explode.

So the Navy Aegis destroyers throw the left hook and then the right cross – double-punches.

In Maine most people just think about BIW as a jobs engine but the impact of these warships is far greater than just jobs.

If we were really concerned about creating jobs we’d be building commuter rail systems at BIW as well as tidal power systems to help us deal with climate crisis.

The war economy must end

Since WW II the US economy has been running on endless war.

We are excited about taking this new banner out to BIW for one of our upcoming bi-monthly vigils so the sailors and shipbuilders can gaze upon it. We want them to think about the political dimension of their ‘mission’ and also the environmental impacts of these warships.

There will be a ‘christening’ ceremony held at the shipyard in the coming weeks as they prepare to launch one of the six destroyers they are currently working on. Our current small vigils are warm-up acts for the bigger public rally.

We all pay for this

So how do we get the public to step up (even with knees shaking) and answer this fundamental question – Do you really support this?

Empire is so over.

Please….help speak out against the madness.

Our only hope for survival is to turn America away from complicity with corruption, endless war, and climate crisis.