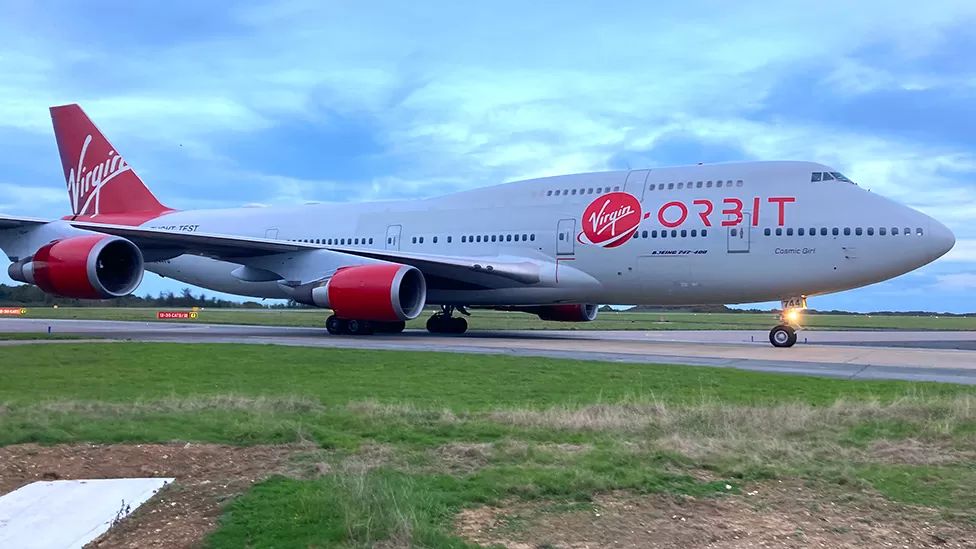 The aeroplane that will be used for the first-ever satellite launch from the UK has touched down to begin mission preparations.

The 747 is set to despatch a rocket out over the Atlantic next month to put nine spacecraft, including British-built ones, high above Earth.

It will now take part in a series of rehearsals leading up to launch day.

Squadron Leader Mathew “Stanny” Stannard came in with the aircraft. The RAF man will pilot the 747 on its historic mission.

Sqn Ldr Mathew Stannard: “The next few weeks for us are really busy”

When precisely the launch will occur is a little uncertain. Permission must come from the Civil Aviation Authority, and it has yet to issue the necessary licences. But the CAA is expected to give the “green light” any day now.

Cosmic Girl is a former Virgin Atlantic passenger plane. Its home base is in the US, in California, where it runs missions out over the Pacific.

But Virgin Orbit’s founder, the UK entrepreneur Sir Richard Branson, wants to expand the company’s satellite launch business worldwide, starting in the country of his birth.

Cosmic Girl has been adapted to carry a rocket, called LauncherOne, to an altitude of about 35,000ft (10km), where it drops the liquid-fuelled booster into a freefall.

Roughly four seconds into that fall, as the jumbo banks hard to the right, LauncherOne ignites its engine to begin the climb to orbit.

The first UK launch mission, dubbed appropriately “Start Me Up”, will be lofting nine individual small satellites for seven projects.

AMBER IOD-3 is a fully UK-developed spacecraft designed to monitor what’s happening on the ocean. It’s envisaged to be the first satellite in a 20-strong constellation to collect maritime intelligence.

Prometheus-2 is a pair of small satellites, or cubesats, owned by the UK’s defence research agency, the Defence Science & Technology Laboratory (DSTL). They’ll test new approaches to imaging and the monitoring of radio signals

CIRCE is two cubesats for DSTL and the US Naval Research Laboratory. Their “space weather” instrumentation will monitor the disturbances above the Earth that arise from interactions with the Sun’s magnetic and particle emissions.

DOVER has been developed by the UK’s RHEA Group company. It’s co-funded by the European Space Agency which has a programme called Navisp that aims to develop next-generation technologies for precise positioning, navigation and timing applications.

ForgeStar-0 is the first satellite developed in Wales. The company behind it, Space Forge, wants to make high-fidelity computer chips and crystals in the weightless environment of space – and then bring them home.

AMAN is Oman’s first ever orbital mission. It is a single Earth observation satellite intended to demonstrate the future feasibility of a larger constellation. The platform has been developed in tandem with Polish partners.

STORK-6 is produced by one of those Polish partners, SatRev. It’s the next instalment of its Earth observation constellation, which it calls STORK. Virgin Orbit previously launched two spacecraft in this constellation.

The satellites will ride to orbit inside a payload module at the front of the rocket. Work to integrate the satellites with this structure is already under way.

This coming weekend, the UK Space Agency will be displaying a 21m (70ft) life-size replica of the Virgin Orbit rocket outside the Science Museum in London.

The real rocket is expected to arrive in Cornwall from California in the next few days.

This inaugural launch has been made possible through cooperative agreements between the British and American governments.

Melissa Thorpe, the head of Spaceport Cornwall, watched the 747 come into Newquay.

“This is the moment we have been waiting eight years for and my team could not be more excited to welcome Cosmic Girl to the UK,” she said.