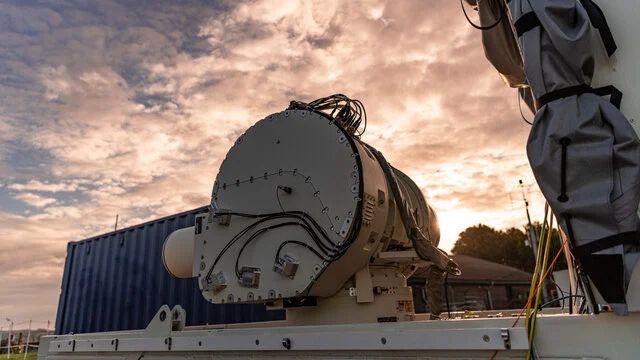 The DragonFire directed energy system is a 50 kilowatt laser developed in the UK. (Leonardo UK)

Breaking Defense reviewed video of the laser disabling a quadcopter UAV, part of tests that show directed energy system could be “viable.”

WILTSHIRE, England — DragonFire, the UK Ministry of Defence’s Laser Directed Energy Weapon (LDEW), is one step closer to becoming an operationally “viable” solution after completing its latest round of live fire tests that included targeting a small drone and metal targets designed to approximate ship and aircraft skin.

On Tuesday, the MoD-sponsored Defence Science and Technology Laboratory (Dstl) announced it had successfully completed tests of the high energy laser (HEL) at its range facility in Porton Down, Wiltshire, on Oct. 28.

According to Dstl officials, tests confirmed DragonFire’s capability to generate “useful effects” against a variety of targets. The weapon system features a 50-kW-class, solid-state and transparent laser.

Speaking to Breaking Defense at the range complex, Dstl officials described how tests had focused on engaging line-of-sight targets at various ranges up to 2.1 miles, even during heavy rain.

Breaking Defense observed video imagery of DragonFire disabling a quadrotor drone at an undisclosed range, in addition to piercing a variety of metallic materials designed to mimic aircraft skins and ship hulls.

“We looked at a broad range of targets including things we hear about in the news being used against us and more high value targets.” Dstl’s Project Technical Authority, Peter Cooper, told Breaking Defense. “But there is no way we can test against all those [threats] at this point in program. So, we have been using indicative targets which can be managed here as well as high-fidelity modelling capability regarding effects. The two trials have allowed us to validate that modelling and input data to confirm our assumptions.”

Between December 2021 and January 2022, Dstl conducted an initial test phase of the DragonFire demonstrator, focused on pointing and tracking of a lower power variant of the HEL.

That represented the first major field trial of the technology following the disclosure of the DragonFire project by the UK MoD back in 2017. The program is led by MBDA UK and supported by Dstl, Qinetiq and Leonardo UK.

According to Dstl’s Technical Partner, Ben Maddison, LDEW technology has potential to provide military forces with a “new capability to defeat a wide range of threats [and] ability to precisely engage and defeat threats at the speed of light.”

Speaking to Breaking Defense at the event, he called the latest test phase a “massive step change” which has proven the technology is “viable” moving forward.

Highlighting the low operating costs of LDEW and difficulties in countering the technology, Madison said DragonFire had “demonstrated the ability to fire with pinpoint accuracy over a number of distances at representative targets.” Target boxes measured just under 14 inches by 14 inches, officials illustrated.

Components featured in the trial included the 50kw HEL from Qinetiq, beam director from Leonardo UK and MBDA UK image processing and command/control technology, which together enables required levels in “fine” and “ultra-fine” pointing and tracking accuracy.

Dstl’s Madison said, “We’re really confident that most direct energy weapons are going to be really effective on the battlefield and we’ll be able to defeat a wide range of threats in order to make them militarily useful.”

Looking ahead to the next phase of the DragonFire program, Dstl suggested specific follow-on steps had yet to be decided, although early customer engagement with the UK MoD had already started. However, industry sources from the consortium suggested they were already speaking to the MoD about potential integration of DragonFire into UK defence programs.

Dstl officials also explained how they expect DragonFire to initially deploy as part of a wider, integrated solution featuring alternative weapon systems like missiles. Officials went onto explain how DragonFire could be employed as a standalone solution once technology had matured enough.

The industrial consortium of MBDA UK, Leonardo UK and Qinetiq is working up plans to reduce the size, weight and power requirements, robustness and maintainability of DragonFire. Furthermore, they continue to develop concepts of operation before handing the HEL over to end users for evaluation in the future.

“This technology could provide the basis for a number of future weapon systems but there are no commitments for a LDEW to take any specific form which may be quite different in design to the DragonFire demonstrator,” Madison said.

“The DragonFire project is running in parallel and closely connected to other defense programs, looking to prepare UK defense so that we can exploit LDEW systems,” he concluded.

Dstl is engaged in a variety of additional DEW efforts as part of the MoD’s Novel Weapons Programme. Concepts include the integration of HEL technologies on board a Royal Navy Type 23 frigate as well as a British Army Wolfhound armored vehicle, both for counter-unmanned aerial system (C-UAS) missions.

On August 30, Rheinmetall also conducted the first live firing of its own HEL from a German F124 frigate to support C-UAS capability. The solution was developed by Germany’s High Energy Laser Naval Demonstrator Working Group, which features MBDA Deutschland and Rheinmetall Waffe Munition. Those tests are scheduled to run through middle of 2023.