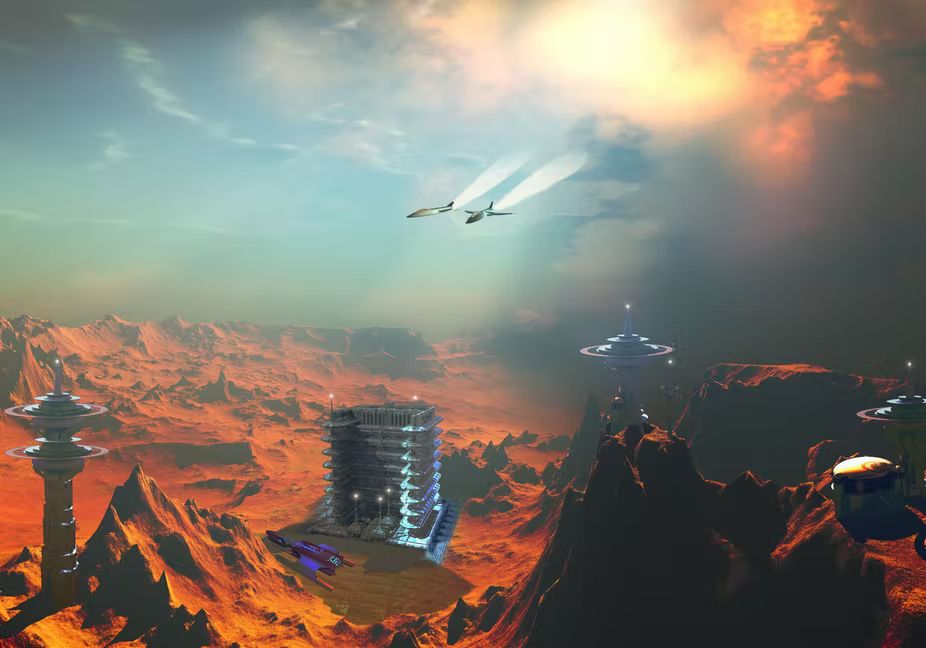 By Alan Marshall,
Published by The Conversation, 13 December 2021

Space tourism is just the beginning of Bezos’s grand project to colonise the entire Solar System. Such space colonisation, he suggests, will fuel global prosperity by opening up boundless resources – including crucial metals and massive amounts of solar and nuclear energy. All of which can make useful products for people back on Earth.

Such grand ideas of extraterrestrial colonisation are hardly new. Not long after Indonesia gained independence in the 1940s, the nascent Space Age set in motion calls for a new wave of colonisation – directed outwards into space.

Although the symbolism of space colonisation is rather distasteful to those peoples who suffered at the hands of past colonialism, at least the extraterrestrial Solar System is not occupied by indigenous people who might have their territories invaded and conquered. However, like colonialism of old, Bezos’s space colonisation plans heavily depend on resource extraction and unfair and abusive labour practices, as we shall see below.

Presently, resource extraction beyond Earth is likely illegal. The Outer Space Treaty, signed by Indonesia on the day it was first presented in the United Nations Assembly in January 1967, states the bodies of the Solar System are the “Common Heritage of Mankind”. In other words, humanity as a whole owns the Solar System in a shared fashion. It cannot be claimed by one person, or one country, or one company.

Therefore, Jeff Bezos should ask the rest of us for permission to set up extractive industries beyond the Earth.

After NASA had planted the US flag on the Moon and sent robotic probes to other planets, space entrepreneurs started seeing a problem with the Common Heritage of Mankind idea. “How can we make a profit from space,” they thought, “if we have to just ‘share’ space resources with the whole of mankind?”

This situation would echo historical colonial endeavours on Earth where corporations like the Dutch East India Company were granted licences to extract and sell resources that did not really belong to them.

In the late 1970s, the prospect of space imperialism prompted some ex-colonial states in the developing world, like the Philippines and Pakistan, to draft a better treaty that would more clearly denote that the extraterrestrial Solar System belongs to all the world.

This new Moon Treaty also declared that space resources could only be used with global consent and should be fairly shared somehow. The trouble is, though, space-capable nations, like the US and Russia, refused to sign up to this treaty when it was first presented to the United Nations in 1979. And space industrialists like Bezos lobby against it.

This lobbying seems to have worked. US President Donald Trump issued an executive order in 2020 condemning the “Common Heritage of Mankind” principle in the Moon Treaty.

The Moon Treaty is an excellent pathway for all humanity to have a vested interest in the Solar System. For millennia, all cultures worldwide gazed upon the Moon and planets in the sky as constant cosmic fixtures, imbibing them into their folklore and spirituality and making them part of their arts and sciences. The Moon and the planets belong to all of us. The Moon Treaty enshrines this in law and makes all humans stakeholders in the future of the Solar System.

If Bezos colonises the Solar System, though, he will keep it for himself. I say this because his record of sharing stuff on Earth is woeful.

Despite being the richest man on Earth, Bezos ranks as one of the most miserly philanthropists alive today. He is only happy to give stuff away (like Strahan’s seat on the NS-19 flight) if it helps him promote his agenda.

Bezos also assiduously avoids paying taxes in America and around the world. As well, he exploits his global Amazon workforce with low-paid, insecure and dangerous jobs. Each worker competes with one another in Darwinian survival-of-the-fittest fashion to fulfil unrealistic production targets.

During the NS-19 space mission, many dozens of Amazon workers lay trapped and fighting for their lives under a collapsed Amazon factory. Bezos, in the meantime, was celebrating the mission with his space passengers.

It seems as though Bezos can afford to fund his space business because he pays so few taxes and cares so little for his employees. If Bezos does colonise space, it will likely be achieved in the same fashion; by exploiting space workers and without sharing the benefits of space extraction by paying taxes at a fair rate.

Bezos’s first joyride into space, in July 2021, so enraged many progressive leaders around the world they called for new “space taxes” so some public good might come from space tourism.

Space exploration fans should also encourage Bezos to pay his fair share of taxes in nations across the world so democratically elected representatives can discuss and decide how to invest in more inclusive non-colonialist forms of space development.

Given his space colonisation plans, I would like to go further and encourage governments around the world to sign up to the Moon Treaty, so colonialism is not repeated on a Solar System scale in the future.