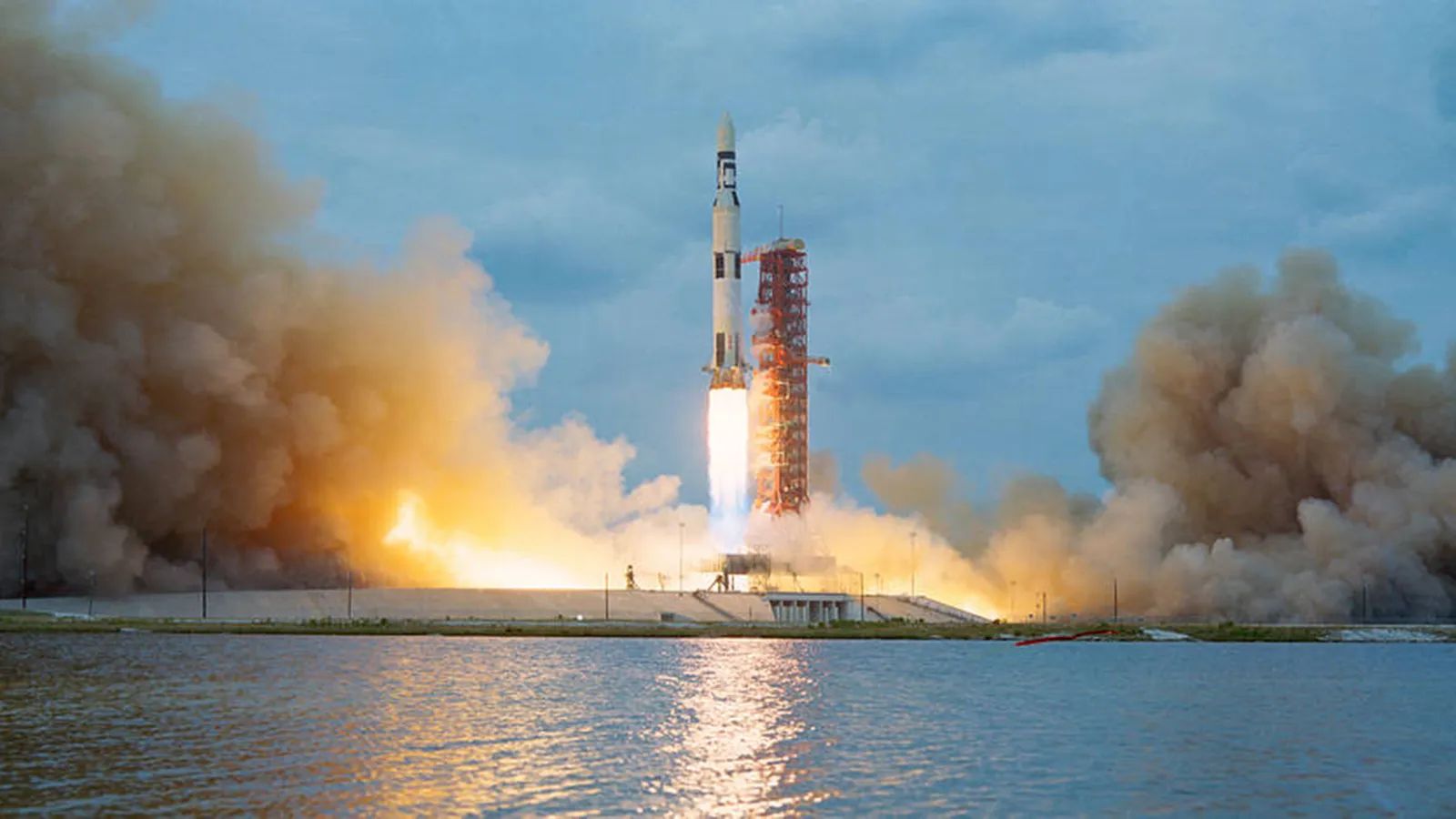 Rocket launches are an integral part of our 21st-Century world. But how do we stop their polluting exhausts accelerating climate change?

The Kazakh Steppe is a vast area of grassland that stretches from northern Kazakhstan into Russia. It is home to the world’s oldest spaceport, the Baikonur Cosmodrome. From its launchpads, both the world’s first artificial satellite and the first human spaceflight, Sputnik 1 and Vostok 1, were launched.

The fuel used by many of the rockets that blasted off from Baikonur was UDMH (unsymmetrical dimethylhydrazine), a very useful propellant for the pioneering Soviet scientists. UDMH didn’t need a source of ignition. It could be stored at room temperature, and it released a lot of energy. Yet it came to be dubbed “devil’s venom” by the scientists who used it.

Devil’s venom was highly carcinogenic to humans and it’s blamed for turning a large area of the steppe into an ecological disaster zone. It’s reported that UDMH rained down on the grasslands when it spilled out of the used first and second stages of Proton rockets and poisoned the soil for decades to come.

In television, and film, spaceflight is usually represented as having little or no impact on the environment. Yet it should be obvious that rocket engines spew out pollution into the atmosphere, like any form of combustion-driven propulsion.

Perhaps the black carbon, or soot, and other emissions didn’t matter when only around 70 commercial rocket launches a year took place. Now that number has doubled; it is expected to increase significantly more over the next two decades due to the growth in demand for services like satellite internet services and space tourism.

At least three scientific research papers have already been published this year on the impact of rocket emissions on the atmosphere, temperatures, and the ozone layer. Some scientists are worried that these carbon particles can act like a form of geo-engineering by absorbing heat.

“We have been aware of it for a fair amount of time, but there haven’t been a lot of studies,” says Christopher Maloney, a research scientist at the NOAA Chemical Sciences Laboratory, who is the co-author of one of the papers. “There are studies that go back to the early 2000s, and even a few beforehand, but it’s never been that big of a concern or focus because the number of rockets being launched every year was so small. Now if you look at the trajectory of the industry, or proposals from various governments, then we can expect to see a tenfold increase in rocket launches and emissions within the next 10 to 20 years, and that is why, suddenly, it’s starting to get momentum in terms of scientific research.”

There is also a great deal of uncertainty as to the effects of rocket emissions on the atmosphere. Despite the work of pioneering scientists like Martin Ross, there has been little momentum to study the impact of space travel emissions on the atmosphere until recently because rocket launches were infrequent, the amount of emissions were low and it wasn’t seen as a major contributing factor to climate change.

The pollution caused by rocket emissions can also seem insignificant compared to the other challenges the world faces, and the benefits the space industry brings to a 21st-Century world. Indeed, the percentage of fossil fuels burned by the space industry is only about 1% of that burned by conventional aviation.

“Last year’s number of missions was 144 worldwide,” says William Pomerantz, vice president of special projects at Virgin Orbit, which launches small satellites horizontally from under the wing of a Boeing 747. Their rocket uses about 1/20th of the fuel of typical ground-launched, heavy-lift rockets, and recent launches include satellites now playing a key role in the collection of climate data. “Given this volume, the space launch industry remains a relatively small driver of atmospheric emissions compared with say, commercial aviation with more than 20 million flights worldwide, and other industries.”

Eloise Marais, an associate professor in physical geography at University College London, and co-author of one of the recent research papers, thinks this comparison is “erroneous”.

“When we compare the amount emitted from rocket launches to aircraft, it doesn’t sound like a lot,” she says. “But this comparison was always erroneous because aircraft released their pollutants within the troposphere and the lower stratosphere, whereas rockets are releasing their pollutants all the way from the surface of the Earth to the mesophere, and when pollution is released into those upper layers it lasts for a longer time than earthbound sources.”

The studies published so far by researchers such as Maloney and Marais tend to focus on Rocket Propellant-1, or RP-1, because this highly refined form of kerosene is one of the most popular rocket fuels. It helped blast iconic rockets such as the Saturn, Delta, Atlas, and Soyuz and, in the 21st Century, SpaceX’s Falcon 9 and Virgin Orbit’s horizontally launched rocket, into space. RP-1 is popular because it is cheaper, stable at room temperature and isn’t dangerously explosive. It also packs a lot of punch.

Marais and a team of researchers from University College London (UCL), the University of Cambridge and Massachusetts Institute of Technology (MIT) used a 3D model to explore the impact on the atmosphere of rocket launches and re-entry in 2019, and the future impact of space tourism promoted by companies like Virgin Galactic and Blue Origin.

Marais’s team found that black carbon emissions will more than double after just an additional three years of space tourism launches, and that particles emitted by rockets are almost 500 times more efficient at holding heat in the atmosphere than all other sources of soot combined, resulting in an enhanced warming climate effect. While current loss of ozone due to space launches is small, the impact of space tourism launches may undermine the recovery in the ozone layer experienced after the success of the 1987 Montreal Protocol which banned substances that deplete the Earth’s ozone layer.

Maloney and his team calculated that each year rocket launches that use RP-1 collectively expel around 1 gigagram, or 1,000 metric tons, of black carbon into the stratosphere. Thanks to the growing number of rockets launched, this could reach 10 gigagrams a year in a couple of decades, along with a temperature rise in parts of the stratosphere of as much as 1.5 degrees Celsius, and a thinning of the ozone layer. If the amount of black carbon expelled into the atmosphere reach 30 gigagrams a year, or even 100, then there will be some cooling of the surface of the planet under this black carbon umbrella.

For their research paper, Ioannis Kokkinakis and Dimitris Drikakis, scientists at the University of Nicosia in Cyprus, used real rocket launch data from a Space X Falcon 9 rocket in 2016 to create the “first high-resolution and high-order computational model” of its kind to analyse in detail the impact of rocket emissions on the climate. This Space X launch was chosen because useful webcam footage of the exhaust gases was available. One of the “biggest surprises” they found is that in the first stage of the rocket launch around 116 tons of CO2 was emitted in 165 seconds. “That is quite significant,” says Drikakis. “Yes, we don’t know the actual impact on the atmosphere because atmospheric chemistry is a very complicated matter, but when you have the cumulative effect of more launches, it is going to get interesting.”

Another discovery was that nitrogen oxides were formed from the heating of the atmospheric air by the hot rocket exhaust gases, and their impact at lower altitudes seems to depend on the design of the rocket nozzles. “This is important because rocket design can potentially mitigate this effect,” Drikakis says.

Every model makes assumptions for efficiency and due to the complex nature of the Earth’s atmosphere, and then undergoes rigorous validation. “If they’re all converging on a single story, then you can have fairly good confidence that they are on to something,” says Maloney.

Now there is a race on to develop alternatives to existing fuels like RP-1 and UDMH, and liquid methane appears to be in the lead. Several new rocket engines, including SpaceX’s Raptor and the European Space Agency’s Prometheus engine, have been designed to use this gas as a fuel because it has a higher performance than other fuels, meaning the rocket can be smaller and produce less soot when it’s launched. Its lower cost means the price of a rocket launch can be reduced, too.

Methane, however, is controversial because it is one of the worst gases as far as global warming is concerned. It is around 80 times more warming than carbon dioxide over its lifetime.

Several rocket start-ups are at a relatively early stage of experimenting with sustainable alternatives to RP-1 made from waste plastic or biomass. Such start-ups typically focus on the easier tasks of reducing their carbon footprint and protecting the environment around the space port, as well as the harder job of cutting emissions in the stratosphere.

Orbex is a UK-based low-cost launch company with a rocket factory in Forres, near Inverness in Scotland. Orbex plans to launch its small rocket called Prime up to 12 times a year from Space Hub Sutherland in the far north of the country.

The fuel its rocket runs on is bio-propane, a renewable biofuel created as a waste product from the production of biodiesel. Orbex’s rocket could end up with around 90% fewer emissions than an RP-1-fuelled launch. It should also produce less soot than rockets burning its kerosene cousin.

Virgin Orbit is looking into the use of sustainable rocket fuels.

The other option to reduce the industry’s atmospheric impact is to explore new ways of launching satellites, horizontally like Virgin Orbit, or even in a sling shot, as Nasa is exploring. Like a child’s toy, this will work by attaching a rocket payload to the end of a huge arm that will be accelerated by electric motors to very high speeds, flinging the rocket out into space.

Researchers fear that the space industry has little incentive to change because of the absence of regulations, a reluctance to abandon safe and proven technology, and the fact that new propellants mean expensive new engines and lengthy testing.

“People are starting to wake up to the disproportionate impact on the atmosphere of the space launch industry, but nothing happens in a hurry in space,” says Chris Larmour, co-founder and CEO of Orbex. “I definitely think we’ll see regulation coming in. The government will set an emissions target and we will have to adhere to it. The industry can lobby all they want, but in the end, it’s the politicians that make laws.”

Yet, others are weary of a regulatory solution to a complex problem.

“One-size-fits-all solutions are very challenging given the broad range of technology types,” says Pomerantz. “However, technology innovation will be key. Propulsion technology is one part of that, but what is really needed is a holistic view of how we maximise the efficiency of full systems – what kind of spacecraft we build, what jobs they do, and how they get launched.”