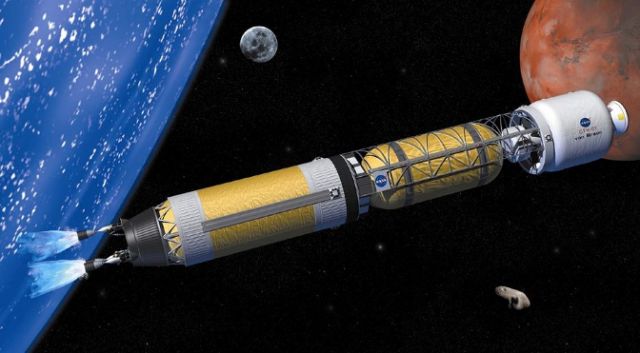 By Karl Grossman,
Published by The Sentinal, 16 August 2022

“The New Space Race is Going Nuclear” was the title of a recent hour webinar presented by the American Nuclear Society. The U.S. government is pouring money into the development of space nuclear power—for commercial, exploratory and military purposes—as described in the panel discussion featuring five very enthusiastic advocates of using atomic energy in space.

Brad Rearden, director of the Government R&D Division of x-Energy, a company based in Rockville, Maryland and, previously, for 20 years, with the Reactor and Nuclear Systems

Division at Oak Ridge National Laboratory, said: “So, at this point, I mean, you’re going to have a reactor that’s potentially stationed on the moon and operating for a decade. You know there’s no [nuclear waste] repository in America. There’s also no repository on the moon. And, so, it’s certainly a policy that needs to be examined. There’s always the possibility of removing it from the Moon at some point for disposal and disposing of it or doing some sort of disposal in place. So, I think it’s a really relevant question and something that certainly needs to be decided on the policy level. We can provide technical answers for that.”

Asked by me in a question about that statement, King wrote back: “Specifically, the moon does not have an ecosystem. While there are what we might consider concerns is terms of leaving things pristine and or long-term human habitat, the moon is sterile and the worry about damaging in ecosystem is largely non-existent.”

And, Sebastian Corbisiero, senior technical advisor in the Nuclear Science and Technology Directorate at Idaho National Laboratory and the leader of the laboratory’s “Fission Surface Power” program, added in the webinar: “I don’t think anything has been officially decided on that. However, I will say that having a reactor on the Moon is less risky than having spent fuel in the vicinity of large population.”

About the webinar, Bruce Gagnon, coordinator of the Global Network Against Weapons & Nuclear Power in Space, said: “I am reminded by the agents of nuclear power in space how the aerospace industry has viewed outer space during the 40 years I have been organizing on these issues. They’ve maintained that space is vast and limitless and has no real ecosystem or

environment that we should be concerned about. So, their philosophy has essentially been ‘full speed ahead’.”

The Global Network Against Weapons & Nuclear Power in Space (www.space4peace.org) founded 30 years ago, in 1992, at a conference in Washington, D.C. is the leading organization internationally challenging the weaponization and use of nuclear power in space. In its description of the August 4th webinar, the American Nuclear Society asserts: “For decades, nuclear energy has played a role, sometimes minor and sometimes major, in humanity’s exploration and research of outer space. Many space experts, scientists, astronauts, and researchers believe that nuclear energy can fundamentally change how we live and work in extraterrestrial environments and that some missions, projects, and endeavors are nearly impossible without the involvement of nuclear technologies. As federal funding is being applied to nuclear projects for various space-based applications and opportunities, an expert panel will discuss how nuclear companies and researchers are poised to capitalize.”

Among the panelists was Michael Anness who, as biographies on the webinar website described, “leads the development new nuclear fuel products and services at Westinghouse Electric Company.” He has been a licensed nuclear reactor operator, it says. Anness spoke of space nuclear projects of Westinghouse Electric, based in Pittsburgh, Pennsylvania, including “microreactors” that would provide “fission surface power.” Anness said: “I’m kind of a fuel guy so I believe fuel is an enabling platform for space nuclear.”

Also on the panel was Kate Kelly, director for Space and Emerging programs at Lynchburg, Virginia-based BWXT Advanced Technologies and, previously, at BWX was “the Advanced Nuclear Systems Program Manager focused on the development of nuclear project to promote the company’s R&D interests in advanced manufacturing and nuclear thermal propulsion technologies.” She spoke about an “inflection point” on the use of nuclear power in

space having arrived. Said Kelly: “Over the last several years there’s been this re-emerging interest and investment by the government in fission systems for in-space power and propulsion.”

The sixth participant in the webinar was Alex Gilbert who has “expertise in space mining, nuclear innovation, energy markets and climate policy,” says his biography on the webinar website. “As Director of Space & Planetary Regulation at Zeno Power [based in Washington, D.C.], Alex oversees regulatory approvals for space launch, maritime, and terrestrial applications of radioisotope power systems…He was lead author of the U.S. Advanced Nuclear Energy Strategy, which outlined how government and industry can establish U.S. leadership in next generation nuclear reactor markets.”

Gilbert said “we are at a unique moment. I call it a space opportunity.” “He said “we could actually see exponential growth. Right now the space economy is around $400 billion globally. By the middle of the century it could be $4 trillion.” This expansion is a result of factors including a “resurgence in science and exploration and defense activities…and commerce. That is what is driving the interest in space nuclear technologies.” The American Nuclear Society describes itself as comprised of 10,000 members dedicated to “exploring possibilities within the realm of nuclear science and technology.”