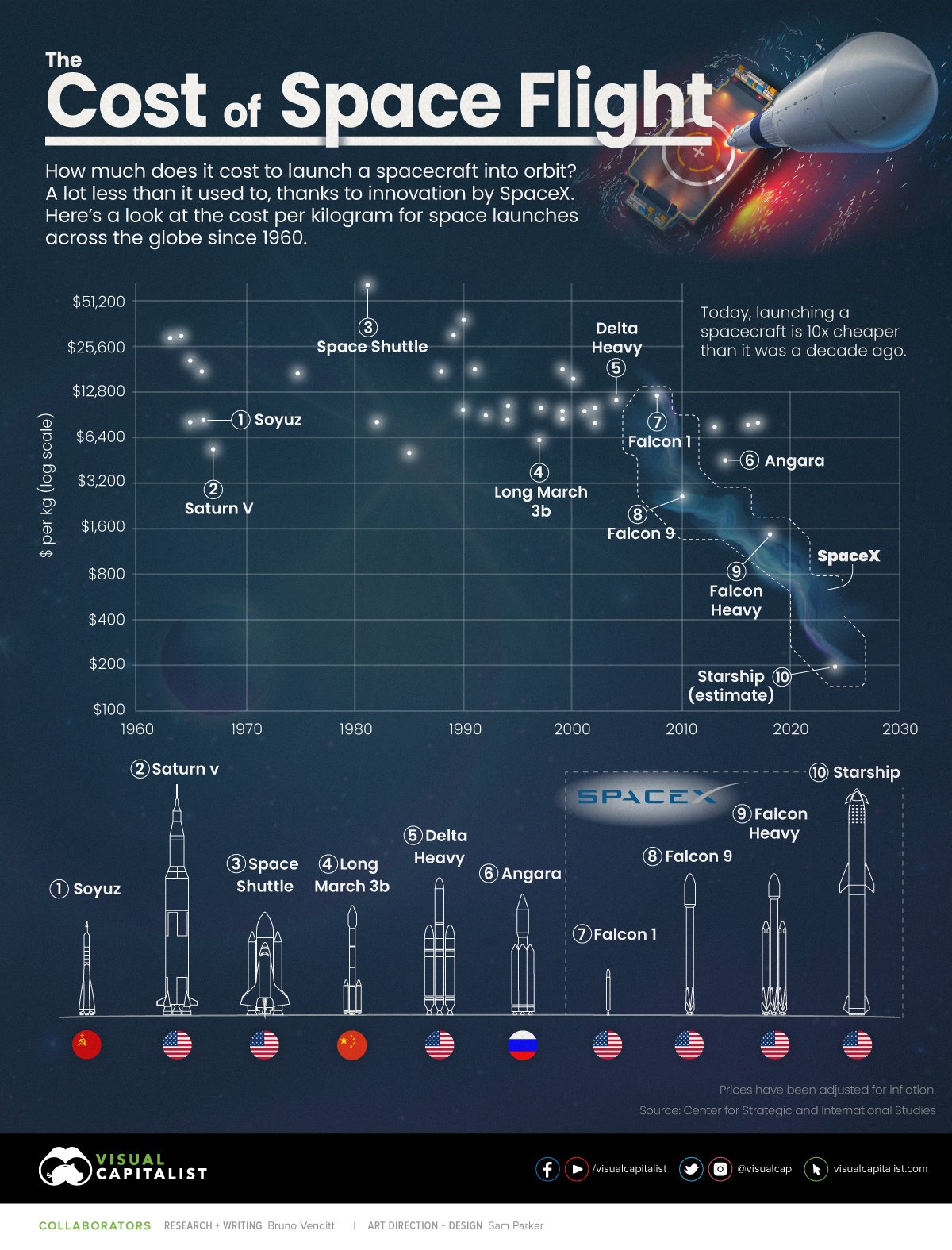 The Cost of Space Flight Before and After SpaceX

On December 21, 2021, SpaceX’s Falcon 9 rocket launched a cargo capsule to deliver supplies and Christmas gifts to astronauts in the International Space Station.

Just eight minutes after liftoff, the rocket’s first stage returned to Earth, landing on one of SpaceX’s drone ships in the Atlantic Ocean. This marked the company’s 100th successful landing.

Like other companies such as Jeff Bezos’ Blue Origin, and Ball Aerospace, SpaceX is designing and building innovative spacecraft that are speeding up space delivery by making it more routine and affordable. But how much does it cost to launch a cargo rocket into space, and how has this cost changed over the years?

In the graphic above we take a look at the cost per kilogram for space launches across the globe since 1960, based on data from the Center for Strategic and International Studies.

The 20th-century was marked by competition between two Cold War adversaries, the Soviet Union (USSR) and the United States, to achieve superior spaceflight capability.

The space race led to great technological advances, but these innovations came at a high cost. For instance, during the 1960s NASA spent $28 billion to land astronauts on the moon, a cost today equating to about $288 billion in inflation-adjusted dollars.

In the last two decades, space startup companies have demonstrated they can compete against heavyweight aerospace contractors as Boeing and Lockheed Martin. Today, a SpaceX rocket launching can be 97% cheaper than a Russian Soyuz ride cost in the ’60s.

The key to increasing cost efficiency?

Although competition has brought prices down for cargo flights, human space transportation is still pricey.

During the last 60 years, roughly 600 people have flown into space, and the vast majority of them have been government astronauts.

For a suborbital trip on Virgin Galactic’s SpaceShipTwo and Blue Origin’s New Shepard, seats typically cost $250,000 to $500,000. Flights beyond that to actual orbit—a much higher altitude—are far more expensive, fetching more than $50 million per seat.

The Future of Space Flight

In a SpaceX press briefing, SpaceX Director Benji Reed said, “We want to make life multi-planetary, and that means putting millions of people in space.”

This may still seem like a stretch for most people. But, given the decreasing cost of space flights over the last two decades, perhaps the sky won’t be the limit in the near future.