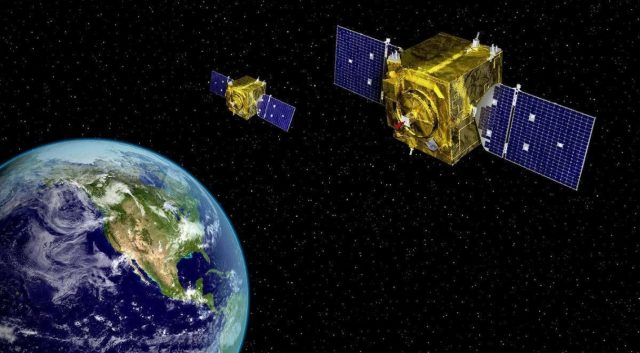 The “GSSAP” in each name refers to Space Force’s Geosynchronous Space Situational Awareness Program, tasked with tracking and characterizing man-made objects as they orbit in space. As a rule of thumb, any satellite involved in GSSAP has the ability to perform Rendezvous and Proximity Operations (RPO), which consists of the satellite maneuvering near an object of interest and collecting data about the object while minimizing the likelihood of a collision. Each satellite maintains a geosynchronous orbit, essentially matching Earth’s orbit as they gather as much information as possible about their surroundings in an effort to stave off attacks like laser dazzling, electronic warfare jamming, and cyber attacks.

Defense contractor Northrop Grumman originally began working on GSSAP-5 and GSSAP-6 back in 2020. Back then both satellites were scheduled for launch that year, but the highly classified program delayed launch for unknown reasons. Also unknown is how GSSAP-5 and GSSAP-6 differ from their predecessors; while a spokesperson for Space Systems Command has said that the new satellites “will provide improved space domain awareness data to the National Space Defense Center and other national users,” no one has mentioned how (or even if) the pair are more advanced than the previous four.

That being said, the entire suite of GSSAP satellites fulfills what many believe to be crucial duties in the age of rapidly-accelerating space exploration. It’s essentially a neighborhood watch program beyond our atmosphere: if another country with an impressive space program, like Russia or China, were to deploy a piece of equipment that malfunctioned or carried malicious intent, the US would likely want to know about it.  Space Force leadership has made several vague comments on the potential for space warfare, including at the Schriever Spacepower Forum at the Mitchell Institute for Aerospace Studies last week. (Don’t lose your cool, though; it’s worth remembering Space Force exists for that exact purpose, so their attention will always remain on the unthinkable.)