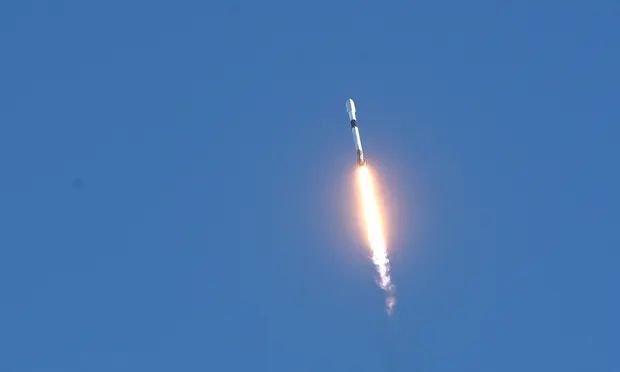 By Donna Lu,
Published by the Guardian, 9 February 2022

SpaceX will lose up to 40 of the 49 Starlink satellites it launched last week as the result of a geomagnetic storm, the company has announced.

Elon Musk’s firm launched the satellites into low-Earth orbit on 3 February from the Kennedy Space Center in Florida, but 80% of them are now expected to burn up instead of reaching their intended orbit.

“Unfortunately, the satellites deployed on Thursday were significantly impacted by a geomagnetic storm on Friday,” SpaceX said in a statement. “These storms cause the atmosphere to warm and atmospheric density at our low deployment altitudes to increase.”

The speed and severity of the storm resulted in an “atmospheric drag” that was up to 50% higher than during previous launches, it said.

Geomagnetic storms are the result of interactions between solar wind – a stream of charged particles from the sun – and Earth’s magnetic field.

Though the satellites were commanded to “take cover from the storm” by flying “edge-on (like a sheet of paper)”, they failed to carry out the manoeuvres required to reach their required orbit.

“Up to 40 of the satellites will re-enter or already have re-entered the Earth’s atmosphere,” the firm said. “The deorbiting satellites pose zero collision risk with other satellites.”

The Starlink satellites are designed to disintegrate upon re-entering Earth’s atmosphere, the company said, “meaning no orbital debris is created and no satellite parts hit the ground”.

SpaceX has already launched 2,000 Starlink satellites and has permission from US authorities to send up 12,000 in total.

The network has drawn growing concern from astronomers, who fear a “megaconstellation” of tens of thousands of satellites could blight the night sky and also hamper scientists’ ability to study the distant universe.

Josef Aschbacher, head of the European Space Agency, said in December Musk was “making the rules” in space, and called for coordinated action from the European Union to ensure that SpaceX’s satellite internet constellation did not prevent other countries from launching their own satellites.

In the same month, China accused the US of ignoring international treaty obligations after two “close encounters” in which the Chinese space station was forced to manoeuvre to avoid collisions with Starlink satellites.