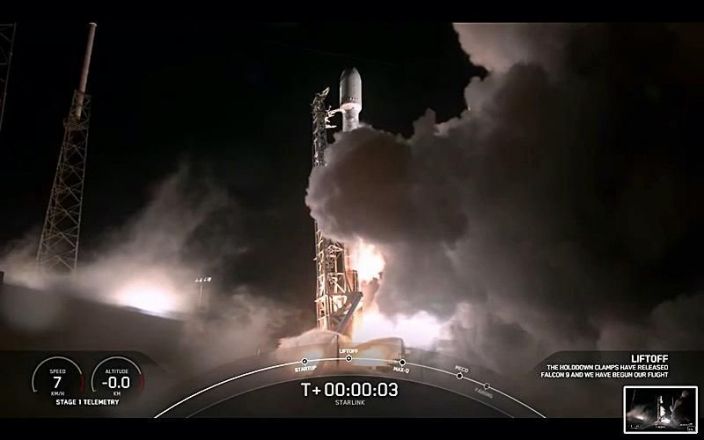 Running a day late because of bad weather, a SpaceX Falcon 9 rocket boosted 60 more Starlink internet satellites into orbit late Monday from Cape Canaveral. An attempt to recover the first stage with a landing on an off-shore droneship failed, ending a string of 24 successes in a row.

Another Starlink launch, with another 60 satellites on board, is planned for early Wednesday from the nearby Kennedy Space Center as SpaceX presses ahead with building out a globe-spanning constellation designed to deliver internet access to customers around the world.

What impact, if any, the landing mishap might have on Wednesday’s flight is not yet known.

Monday’s flight got off to a spectacular start at 10:59 p.m. EST when the Falcon 9 rocket’s nine first stage engines ignited with a burst of fire, 229 pushing the 229-foot-tall booster away from pad 40 at the Cape Canaveral Space Force Station.

Generating 1.7 million pounds of thrust, the engines powered the rocket away on a northeasterly trajectory, rapidly accelerating as they consumed propellants and the vehicle lost weight.

After climbing out of the dense lower atmosphere, the first stage, making its sixth flight, separated and headed for landing on an off-shore droneship.

As usual, the booster fired three of its engines to slow down before plunging back into the lower atmosphere, but shutdown, seen in downlinked video, did not appear normal. A camera on the droneship later showed the glow of a landing “burn” off to one side, but the booster never appeared and presumably fell into the ocean nearby.

“Unfortunately, we were not able to stick the landing today,” said SpaceX’s launch commentator, who described the loss as “a bummer.”

It was the first unsuccessful booster recovery for SpaceX since the sixth Starlink mission in March 2020. Since then, the California rocket builder carried out 24 successful recoveries in a row before Monday’s mishap.

But the landing failure did not affect the outcome of Monday’s mission. The Falcon 9’s second stage, powered by a single vacuum-rated engine, fired twice as planned to reach the planned orbit about 45 minutes after liftoff. The 60 Starlinks were released to fly on their own about 20 minutes later.

SpaceX has now launched 1,145 Starlinks. The company has regulatory approval to launch more than 12,000 satellites, creating a network of relay stations providing two-way internet connectivity to customers around the world.