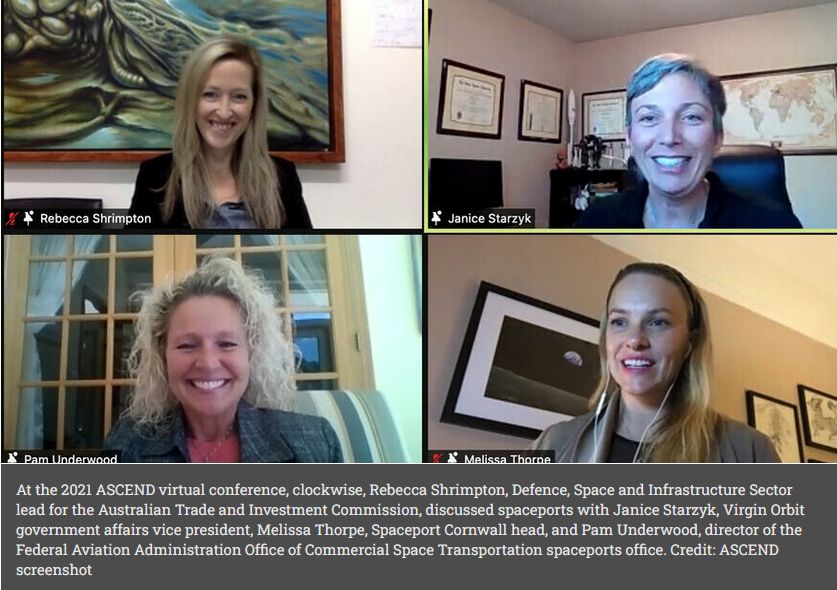 SAN FRANCISCO – Spaceport Cornwall is preparing to release a carbon impact report as part of its campaign to be “open and transparent” about the environmental impact of horizontal launches scheduled to begin next year, said Melissa Thorpe, Spaceport Cornwall head. “It’s not just about offsetting and mitigation. It’s about actually using technology to bring that impact down so that all the satellites in space can do this incredible work, but in a more responsible way of getting into space in the first place.”

With the backing of the U.K. Space Agency and local Cornwall Council, Spaceport Cornwall is working to integrate launch activity with the local airport’s ongoing passenger service, search and rescue, and air ambulance. Virgin Orbit plans to begin sending its LauncherOne rocket to space next summer from a modified Boeing 747 taking off from Cornwall Airport Newquay.

Plans for the spaceport in southwestern England were opposed initially by environmental groups whose members did not think the spaceport “was not the right fit for Cornwall,” Thorpe said Nov. 8 at the American Institute of Aeronautics and Astronautics’ ASCEND 2021 virtual conference.

Spaceport Cornwall responded to the concerns by emphasizing environmental responsibility and improving communication with the local community.

“We’ve done a lot of work communicating why space is important,” Thorpe said. “At the same time, we as an industry need to get better at the way we launch, and the roles and responsibilities of being a spaceport and the gateway to space.”

“We’re looking at ways to mitigate any issues there,” Rebecca Shrimpton, who leads the Australian Trade and Investment Commission (Austrade) Defence, Space and Infrastructure Sector.

Austrade recognizes the environmental approval process as a foundational hurdle for spaceports. As a result, the agency works with local indigenous people, local and territorial government councils, and industry to emphasize environmental protections and environmental responsibility.

“This is going to be a real issue,” Shrimpton said. “Not only is it about protecting the environment from the process of launch but it’s about finding greener technologies for launch. How can we launch with less environmental impact in the vehicles and the fuels and the processes themselves?”

Spaceports are working together to address environmental concerns and share solutions.

The U.S. Federal Aviation Administration, which has licensed 12 spaceports, is happy to consult with countries writing space-related legislation and spaceport regulations.

“My advice to any country is: talk with your allies,” said Pam Underwood, director of the FAA’s Office of Commercial Space Transportation spaceports office. “Consider consulting with United States, the UK or Australia. We need to be able to work together to get that interoperability for industry. I look forward to greater partnership with other international space boards and governments.”

Spaceport Cornwall sees space launch activity as a way to create jobs and spur local economic growth. One of the satellites expected to fly on Virgin Orbit’s first UK launch is Kernow Sat 1, the first satellite being designed and manufactured in Cornwall. Kernow Sat 1 will track and monitor the health of the ocean near Cornwall, gathering information for seagrass restoration and kelp forest planting as well as pollution and temperature data.