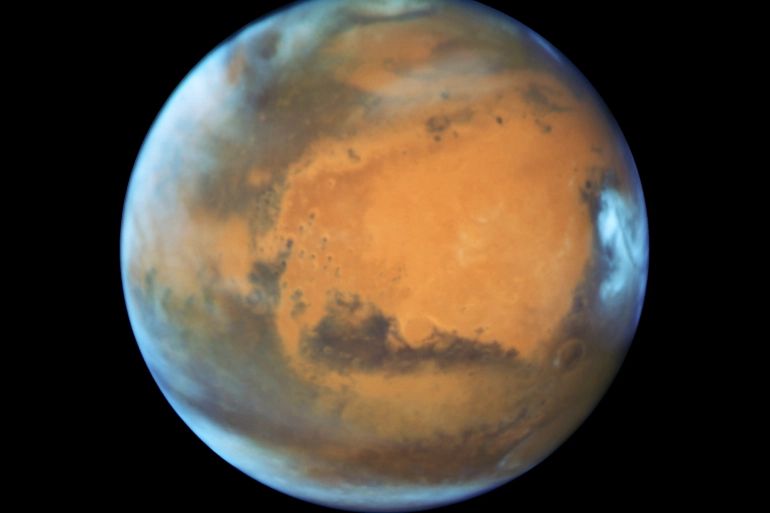 Deep-space ventures by the three countries will all arrive at Earth’s planetary neighbour this month to analyse its atmosphere and surface as well as look for signs of past life.

The Red Planet is about to get a little crowded. Three separate missions to Mars launched by the United States, China and the United Arab Emirates (UAE) will all reach their destination this month after taking flight within just 11 days of each other in 2020.

The uncrewed missions promise to yield new insights for Earth-bound scientists intent on unravelling the mysteries of the solar system and scanning Mars for signs of extraterrestrial life, as well as enhancing our collective understanding of the cosmos.

But the Mars ventures are also the latest landmark in the new geopolitical space race, say experts, as the world’s most powerful nations once again compete with one another for dominance beyond Earth’s surface.

“Competition in space is heating up,” Christopher Impey, a professor of astronomy and associate dean in the College of Science at the United-States based University of Arizona, told Al Jazeera. “Three missions arriving at Mars in one month is unprecedented.”

“Collectively, they will add a lot to our knowledge of the Red Planet,” Impey added.

Each of the ventures has “different aims and capabilities”, Impey said. The US and Chinese missions, which come against the backdrop of an intensifying geopolitical rivalry between the two nations, include plans to land exploratory rovers on Mars, while the UAE is focused on surveying it from above via an orbiter.

The UAE’s mission will be the first to arrive in Mars’s orbit on Tuesday, ushering in a new era of space exploration for the Gulf nation.