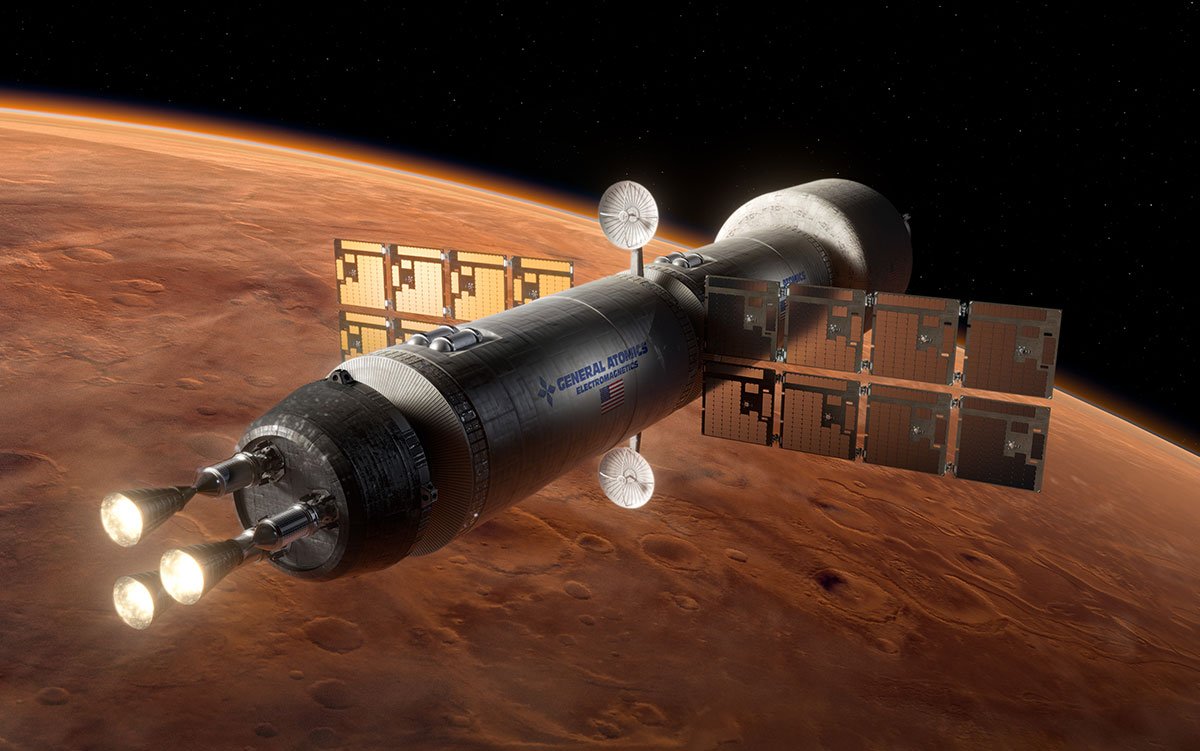 In november last year Russia blew up a defunct satellite, creating shrapnel that will orbit the Earth for decades. The “direct ascent” missile test was a first for Russia and echoed a similar weapons test carried out by China in 2007, which also created an enduring cloud of debris. India and America have shot at inoperative satellites, too, although fortunately without creating as much associated long-lasting space junk.

All this target-practice concerns American defence chiefs, who would struggle to fight a war if critical satellites were knocked out. The Pentagon, therefore, wants its next generation of satellites to have enough power to be capable of evading attacks. It thinks the answer lies with nuclear-powered propulsion.

Two initiatives will investigate the concept. The first, led by the Defence Advanced Research Projects Agency (darpa), will test a technology known as “nuclear thermal propulsion”.

Working with American firms, including Blue Origin, General Atomics and Lockheed Martin, darpa spacecraft will carry a small nuclear reactor. Inside, uranium atoms will be split to generate tremendous heat. That heat will be absorbed by liquid hydrogen sucked from a tank on board the spacecraft. The hydrogen, which will start at a storage temperature colder than -253°C, will rapidly expand as it warms. As that hot gas shoots out of a nozzle at the back of the spacecraft, it will produce thrust.

Such a spacecraft could climb to a geostationary orbit above the Earth, nearly 36,000km up, in mere hours. Satellites that burn normal rocket fuel need several days for the same trip.

Nuclear-powered satellites with abundant power would also be hard to destroy—their trajectories could be changed often enough to become unpredictable. darpa wants to test its spacecraft, dubbed draco (Demonstration Rocket for Agile Cislunar Operations), in orbit in 2025. This is an ambitious timetable, given that nuclear thermal propulsion has never been tried out in space.

In September 2021 it solicited proposals for nuclear systems for satellite propulsion or, alternatively, to power onboard electronics. Companies pitching ideas need to meet a few conditions: they should steer clear of the nuclear-thermal-propulsion technology that darpa is already working on; they should be able to build a prototype within three to five years; and they need a credible plan for testing in space. Out of the dozens of proposals received by the diu, the first two winners are set to be announced later this month.

Ryan Weed, a captain in the United States Air Force (usaf) who leads the diu programme, says the submitted proposals fall into distinct categories. Some incorporate nuclear reactors, but not to heat liquid hydrogen. Instead, the heat will be used to generate electricity that will then be applied to a propellant gas such as xenon. This will ionise the gas which, thanks to an electric or magnetic field, will zip out of a nozzle to produce thrust.

Ion thrusters are not a new idea but a nuclear reactor could produce far more electricity to power them than even a large solar array. Satellites without solar panels would, usefully for military purposes, also be harder for enemies to track and disable.

Many of the designs for nuclear electric propulsion call for the same process of splitting atoms used in terrestrial nuclear-power plants. The kit for space would weigh at least a tonne, so it would only power big satellites.

Other proposals are for radioisotope thermoelectric generators (rtgs). These kinds of “nuclear batteries” have long been used to power probes sent into deep space, where solar power is especially feeble.

Instead of building a nuclear reactor, an rtg uses devices called thermocouples to produce a modest wattage from heat released by the decay of radioactive isotopes.

Plutonium-238, which is a by-product of weapons development, has been used by nasa to power both the Voyager probes, launched in the 1970s and still functioning, as well as the Curiosity rover currently trundling around Mars.

Plutonium-238, however, is heavily regulated and in short supply. And with a half-life of 87.7 years, the heat it produces from radioactive decay is spread over a long time.

The diu is therefore looking for alternatives with a shorter half-life and a “much higher thermal power density”, says Captain Weed. Cobalt-60, with a half-life of 5.3 years, is a promising alternative and available commercially. He would like rtgs to provide electricity for thrust and also the onboard electronics for satellites that are the size of a washing machine.