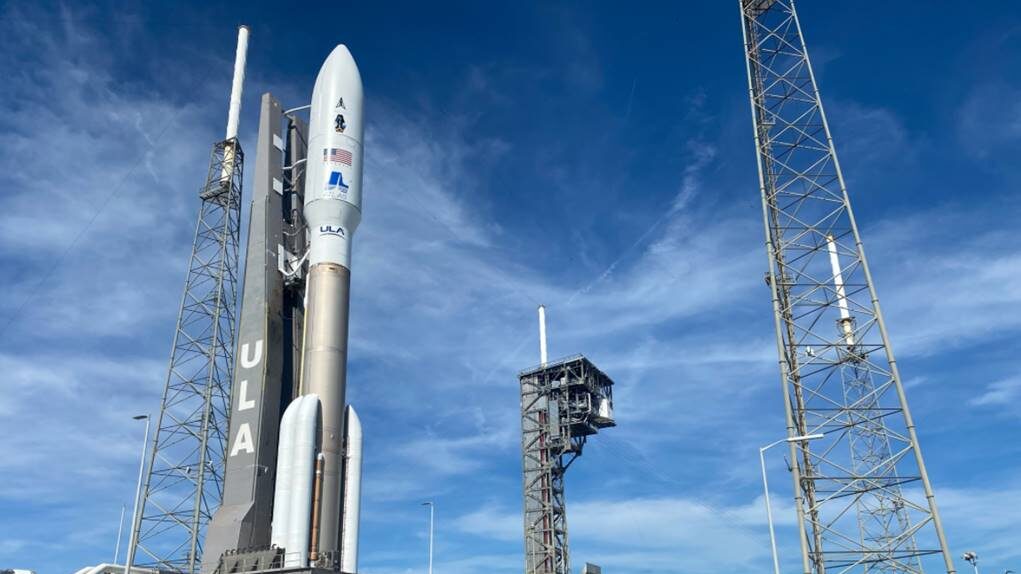 The two spacecraft making up the mission — Space Test Program Satellite (STPSat)-6 and the Long Duration Propulsive Evolved Expendable Launch Vehicle (EELV) Secondary Payload Adapter (ESPA), known as LDPE-1 for short — were lofted early this morning on a United Launch Alliance (ULA) Atlas-V 511 rocket. The spacecraft, both built by Northrup Grumman, will operate in Geosynchronous Orbit (GEO), some 36,000km up and are expected to operate for eight and three years, respectively.

The Atlas V launch vehicle is equipped with a new In-Flight Power System (IFPS), that supplies power to the satellites’ batteries during its seven-hour ascent and thus ensures the two spacecraft will have fully charged batteries when deployed, ULA’s website notes.

The two satellites are carrying a number payloads, though those onboard LDPE-1 are classified. STPSat-6 carries two main payloads, NNSA’s nuke detector and NASA’s laser communications link, and a number of other Defense Department experiments.

DoD’s Space Test Program managed its development and the integration of its nine total payloads, SSC said in a Nov. 22 press release. “These updated capabilities proactively combat near peer threats by improving and expediting the intelligence provided to the warfighter,” SSC noted.

The contract for STPSat-6 was awarded in 2017 to Orbital ATK, now Northrop Grumman Innovation Systems. At the time, it was slated to fly “no earlier than June 2019,” according to SSC’s predecessor organization, Space and Missile Systems Center. The delay was caused in part by the effects of the COVID-19 pandemic.

NNSA’s Space and Atmospheric Burst Reporting System 3 (SABRS-3) is an operational system to detect nuclear explosions. Such so-called NUDET devices are critical for the US government’s ability to monitor compliance with nuclear arms control treaties, such as the 1963 Limited Test Ban Treaty that prohibits nuclear weapons detonation in space, the atmosphere or under the sea, NNSA’s website says. SABR-3 further will support Strategic Command’s nuclear warfighting mission.

NASA’s Laser Communication Relay Demonstration (LCRD) payload is designed to “test technologies for the next generation of data relay satellites,” according to ULA. Over the course of the two-year mission, researchers at NASA’s Jet Propulsion Laboratory will first test the LCRD’s ability to send data between ground stations on Earth in California and Hawaii to the satellite, NASA’s website explains. it will then be used to communicate with the International Space Station.

Optical communications will be a foundational element not only for NASA’s planned exploration of the Moon and Mars, but also Space Force’s ambitions to expand its operations to the vast region of cislunar space ranging from GEO to the outer orbit of the Moon. Current radio communications are simply too slow to accommodate timely voice communications at those distances, much less the transmission of high-density data such as 3D maps. “Using lasers to encode and transmit data can provide missions with data rates 10 to 100 times better than current radio systems,” NASA explains, reducing transmission times to Mars for example from weeks to days.

The other payloads aboard STPSat-6, according to Northrop Grumman’s website, include:

The LDPE-1 satellite is based on Northrop Grumman’s ESPAStar satellite bus, which carries both an ESPA ring payload adaptor and the propulsion system. ESPAStar has the capability to host six smallsat payloads totaling 1,920 kilograms (4,230 pounds), the company’s website says.

The LDPE-1 is the first in a series of LPDE spacecraft slated to fly, according to SSC. Two more LDPE launches are currently being planned.

“The LDPE program provides modular, flexible features that, when combined with available launch opportunities, create a ‘freight train to space’ for experiments and prototypes” in GEO, SSC elaborated in a press release today. “LDPE-1 hosts payloads that will advance technology concerning communications, space weather sensing, and space domain awareness,” SSC said, but provided no other details about the classified payloads. The LDPE itself is operated by SSC’s SSC Development Corps’ Prototype Operations Division.

However, the Air Force Research Laboratory (AFRL) late Tuesday afternoon announced that one of its experiments is among the LDPE-1 payloads: a Cubesat called Ascent designed to evaluate the performance of commercial-off-the-shelf (COTS) technology in the near-geosynchronous space environment.

Ascent is a 12-unit Cubesat conceived and developed by AFRL’s Space Vehicles Directorate and DoD’s Space Security and Defense Program under a program worth about $10 million, the press release said.

“We are looking forward to gaining a better understanding of the capabilities of COTS spacecraft buses in the GEO space environment,” Ascent mission manager Capt. Sunderlin Jackson explained. “The Ascent bus, developed by Blue Canyon Technologies, is composed of several demonstrations for a small satellite in GEO that includes cold-gas thrusters, electric propulsion and a COTS global position system receiver.”