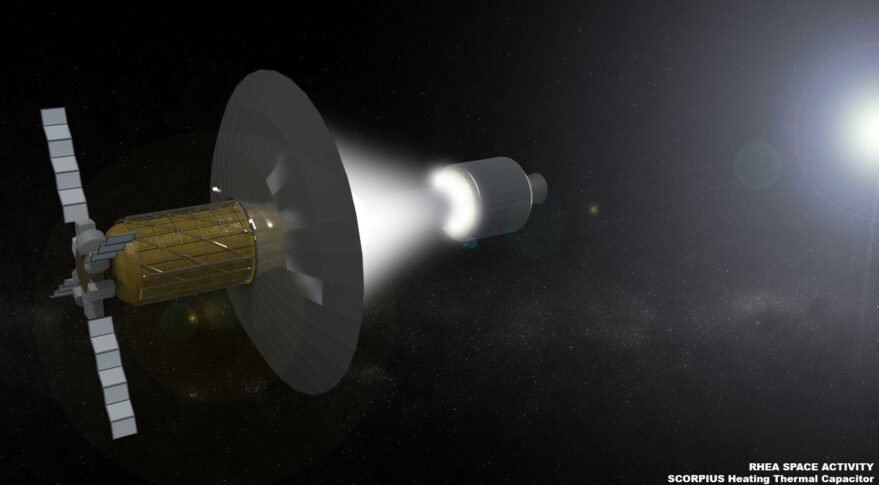 RSA won an SBIR contract funded by the Space Force to design a spacecraft with a solar-thermal propulsion system.

WASHINGTON — A startup under contract to the U.S. Space Force is investigating the use of solar-powered vehicles for operations in deep space beyond Earth orbit.

As the Space Force plans possible missions in cislunar space — the vast area between the Earth and the moon — one of the concerns are the limitations of traditional chemical propulsion. Spacecraft powered by solar thermal energy that use water as its main propellant could provide a viable alternative, says Shawn Usman, astrophysicist and founder of startup Rhea Space Activity.

The company envisions a spacecraft that, once launched into space, will deploy an origami-like solar reflector panel. The concentrated sunlight will provide both thermal and electric propulsion using water as the propellant.

The solar reflector, shaped like a parabolic dish antenna, also will be used to collect and transmit communication signals, Usman says. The spacecraft, named Scorpius, could support military needs for in-space maneuvers and other operations in the cislunar region hundreds of thousands of miles from Earth.

Delivering payloads fast to destinations beyond geosynchronous orbit is not efficient with chemical propulsion, he says. Electric propulsion can move large payloads but it could take months or years to reach cislunar space.

The Defense Advanced Research Projects Agency (DARPA) in a program known as Demonstration Rocket for Agile Cislunar Operations (DRACO) is developing a nuclear-thermal propulsion system as an alternative to conventional chemical propulsion.

Beau Rideout, aerospace engineer at RSA, says one of the problems with systems like DRACO are safety and policy challenges of working with nuclear reactors.

Rideout says the Scorpius vehicle promises capabilities similar to DRACO but without using radioactive material to achieve its high-performance level of propulsion.

RSA’s propulsion concept is based on Howe Industries’ solar thermal propulsion system developed for small satellites. Howe Industries, based in Scottsdale, Arizona, has won NASA and DARPA contracts for its ThermaSat engine.

Troy Howe, president of Howe Industries, says Scorpius is “a new twist on an old concept.” He notes that solar thermal propulsion has been extensively studied since the 1990s but considered impractical.

Rideout says the RSA design would be more effective because it uses high-thrust maneuvers instead of the old low-thrust, continuous burn concept, and takes advantage of the Earth-moon gravitational environment.

The Scorpius concept was designed based on input from the U.S. Space Force’s Space and Missile Systems Center (SMC), Usman says. “They said they wanted a bimodal system and asked us to think about different payloads or different capabilities that can be used using this propulsion system.”

“We suggested doing the communications part because we already have this huge dish that also serves as part of the propulsion architecture,” he says. “And so that was kind of the far out idea that we came up with and SMC really liked it as a new way of doing deep space communications.”

RSA’s SBIR Phase 1 contract provides $50,000 for the initial study. The company will pitch Scorpius to an audience of U.S. Air Force and Space Force officials August 19 at a “Space Pitch Day” event hosted by SMC. The goal is to win a Phase 2 contract that would be worth up to $1.7 million.

That funding would pay for laboratory testing. If the project is successful, the Space Force could fund a Phase 3 award to fly a demonstration spacecraft and prove the concept.

A small satellite about 100 kilograms would be used to prove the concept. The final vehicle size would be around 22,000 kilograms and five meters in diameter when stowed.