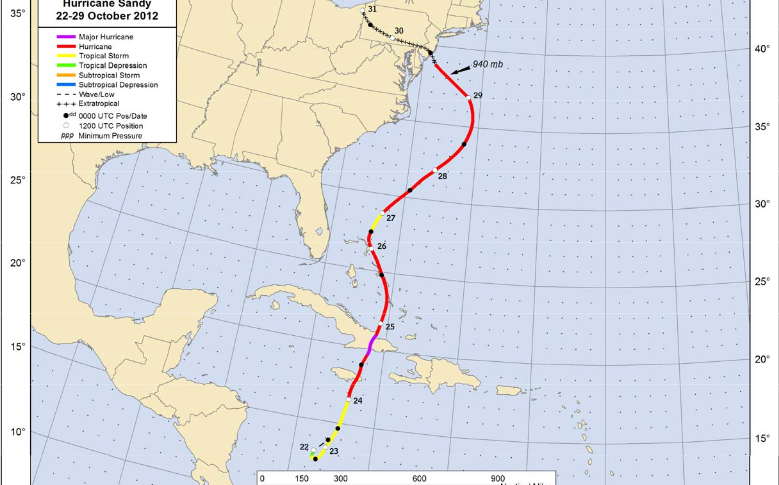 Image: Hurricane Sandy turned west in 2012 before making landfall in New Jersey. Without microwave sensor data, forecasters would have called for the storm to make landfall 24 hours later than it did and to strike Maine. Credit: National Weather Service

SAN FRANCISCO – Satellite megaconstellations could pose a threat to the spectrum that meteorologists are eager to protect from radio frequency interference.

At the American Meteorological Society annual meeting in Denver, meteorologists and spectrum experts expressed concern about proposals for SpaceX’s second-generation Starlink broadband constellations and acknowledged that other proposed megaconstellations could create interference as well.

SpaceX has asked the U.S. Federal Communications Commission for a license to transmit signals from gateway stations to nearly 30,000 Starlink second-generation satellites in the 81 to 86 gigahertz band.

“The sheer number of potential gateway uplink stations around the world could contribute to adjacent band contamination and further due diligence would be needed,” said David Lubar, Aerospace Corp. senior project leader, said at the AMS meeting. “We do not know if their out-of-band emissions will be an area of concern.”

Meteorologists pick up faint signals indicating humidity over land in the 86 to 92 gigahertz band, adjacent to the bands Starlink has proposed for uplinks.

It’s not yet clear whether the Starlink uplinks would pose any danger to the meteorological observations, but weather forecasts rely on passive radiometers to pick up faint signals to identify water vapor, precipitation and atmospheric temperature in various spectral bands.

“These bands are established by the fundamental laws of physics,” Tony McNally, principal scientist in the European Centre for Medium-Range Weather Forecasts Research Department, said at the AMS meeting.

Complicating the matter is the fact that “the signals that we are looking for with our passive satellites are much smaller than the interference patterns created by some of the other uses of the spectrum,” McNally added. “I would liken it to trying to gaze up at the stars at night when someone puts an incredibly bright flashlight in your eyes.”

Meteorologists sought protection for unwanted emissions in the 81-86 gigahertz band at the 2019 World Radiocommunications Conference in Egypt. At the time, the International Telecommunications Union body of delegates declined to take up the matter.

As a result, the FCC has no current regulations that would limit SpaceX’s use of the band.

“Any new international rules are unlikely to be enacted until after 2027,” Lubar said.

This is just one example of the whack-a-mole predicament meteorologists face in trying to safeguard atmospheric measurements and weather-data relays from RF interference.

Another potential problem relates to the passive measurements meteorologists make from 50.2 to 50.4 gigahertz. Careful observation of that band reveals temperatures at various levels of the atmosphere. That data, paired with humidity measurements in the 180 to 184 gigahertz band, are key elements of weather forecasts.

Existing regulations protect the 50.2 to 50.4 gigahertz band from interference, but the signals are so weak they could be drowned out by noise emitted in adjacent bands.

“These systems in space are measuring extremely sensitive bits of energy,” said Beau Backus, Johns Hopkins Applied Physics Laboratory senior spectrum manager. “That makes it essential that this be in protected areas.”

Tens of thousands of satellites are expected to launch in the next decade. Many satellite operators are proposing transmitting data to spacecraft in bands immediately above and below the 50.2 to 50.4 gigahertz band.

“The industry is moving faster than our scientific development,” Michael Farrar, director of the National Centers for Environmental Prediction at National Weather Service, said at the AMS meeting. “This problem is going to accelerate. We should build a process that can rapidly respond to these scenarios.”

The American Meteorological Society’s RF Allocation Committee also is concerned about potential interference in the 23 to 24 gigahertz band, where the Advanced Technology Microwave Sounder on the National Oceanic and Atmospheric Administration’s Joint Polar Satellite System collects passive measurements of atmospheric water vapor. Those observations combined with data from other active and passive sensors on U.S. and international satellites help meteorologists predict storm tracks and rainfall levels.

“Our systems are making very good use of combinations of channels,” McNally said. “The problem with it is that if you then have a losing battle [to protect] one channel, you can effectively wipe out the value of channels which are not contaminated because you don’t have this corroborating piece of evidence from the channel that you’ve lost. The quality of forecasts that we enjoy in our society are a result of this very sophisticated multichannel usage in data simulation systems.”