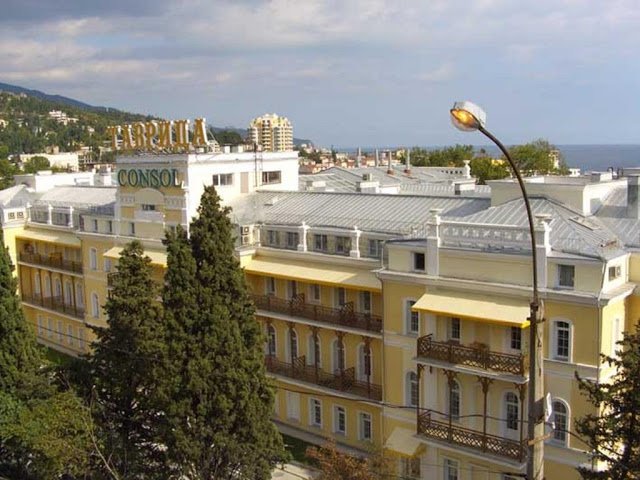 Despite the western punitive sanctions against Crimea I arrived here Friday about 5:00 pm on a flight from Moscow.  It was snowing at the airport as I left Russia’s capital city.  When I arrived in Simferopol, Crimea it was sunny but cold.

I spent the night in the Ukraina Hotel in Simferopol, the same hotel our Russia Study Tour group stayed in last May when we visited the city.  On Saturday morning I had a meeting with one of my hosts to review plans for my time in Crimea, and the conference I was invited to attend.  He told me he is also working to arrange for me to speak at a local university while I am here.

After the meeting I took a taxi to the famous Crimean city of Yalta, about a two-hour ride.  The traffic was quite heavy which indicated that the new bridge Putin had built from the mainland of Russia out to the Crimean peninsula was in fact bringing many tourists to the ‘forbidden land’.

The west is now punishing Crimean citizens for their vote in 2014, by a super-majority of  95.7 percent, to rejoin Russia after the US sponsored coup in Kiev, Ukraine.  The US-NATO were licking their chops wishing to grab Crimea (and its Black Sea Russian naval base) after the coup.  But they were thwarted by the people of Crimea.  The US-NATO claimed that Russia annexed (stole) Crimea but that was just propaganda. The mostly Russian ethnic population in Crimea had also voted to rejoin the mother country in 1991 at the time of the Soviet Union’s disintegration but they were ignored.

As a result the US and Europe threw severe sanctions on Crimea as punishment for exercising their democratic rights.  My credit card won’t work here, Crimean students cannot go to European or US universities like they could in the past, and tourists who used to come here by the droves on cruise ships no longer dock in Yalta.

I’ve now been here three times, the first exactly one year ago when I came to prepare the way for our Russia Study Tour last spring.  This time I can see big changes.  The roads are much better, new homes and apartment building are being built all over, and many more people (mostly Russian tourists) are on the street here in Yalta. The 2nd largest Muslim Mosque in Russia (being built for the Crimean Tatars) looked to be nearly completed in Simferopol when my taxi drove by it on the way to Yalta.

For the next several nights in Yalta I am staying in the Tavrida Hotel (pictured above) just a few meters from the Black Sea along the promenade area of the city.  Cost of my room in this historic and beautiful hotel?  Came to $52 per night (includes a great breakfast) with a small washing machine in my room, so I did my laundry.  The hotel staff kindly provided the soap and turned the washer on for me.

Yalta is most famous for the 1945 summit conference between Churchill, Roosevelt, and Stalin held at the Livadia Palace (summer residence of the Russian imperial family in the 1860s).  The aim of the big-three conference was to shape a post-war peace that represented not just a collective security order but a plan to give self-determination to the liberated peoples of post-Nazi Europe.  But due to western moves to isolate and demonize the Soviet Union in the post-war period, many of the hopes for the Yalta meeting quickly faded. The Cold War ushered in new tensions that allowed the US to build the permanent war economy and posture itself as the global policeman.  We all know how that turned out.

The conference I will be speaking at on November 7-8 will be held at Livadia Palace.  I will be addressing the topic of  ‘anti-war motivation, wish of the people to live in peace’.  I am looking forward to it.

Last night I was excited to meet fellow Mainer Regis Tremblay (also now in Yalta) and our friend Tanya Bukharina (our guide earlier this past May when we came to Crimea) for pizza.  They were also recently in the Donbass region doing some film projects so we compared notes about the experience.  Everyone is trying to predict what will happen next in Kiev when it comes to dealing with the two republics on the Russian border who are demanding their independence after being repeatedly attacked since 2014.  The key element in the equation is the US-NATO desire for war on the Russian border.

It’s difficult to predict what Washington & Brussels will do.  Are they willing to risk WW III with Russia?  Will any sane thinking emerge in European capitals to help stop this march toward madness?  Will the American people wake up and learn that the Ukrainian ‘adventure’ is a corrupt and tragic mistake initiated by the Obama administration and now continued by Trump?

Only time will tell.  Meanwhile I will keep writing and posting about Ukraine in hopes that people will catch on to this great modern tragedy.

This shot is along the promenade in Yalta.  I moved today to the hotel that conference participants will be staying in which is just beyond the boat restaurant in the background.  Yesterday while walking along the promenade there was an Orthodox service happening just outside the church in the foreground.  The singing and chanting were quite special to hear.  A large crowd formed.  I’ve been asking alot of people what the difference is between the Russian Orthodox Church and the Roman Catholic Church.  The answer has repeatedly been that Rome is basically allied with western governments and their political agendas.  People say the Orthodox Church holds stronger to the original Jesus message.  There is no doubt that the Russian people are far more traditional than their western peers.

I walked for several hours yesterday up and down the promenade where many shops, restaurants and hotels are located.  I also ventured off into some interesting side streets and saw many older houses and buildings.  The streets are very narrow and parking is a premium.  I noticed that most people were not shopping in the very trendy and expensive shops along the promenade. The only two stores I noted that were crowded were selling cosmetics and jewelry. I imagine that before western sanctions were slapped on Crimea, following their 2014 vote to return to Russia, most of these shops were filled with comparatively wealthy westerners arriving on the cruise ships which no longer dock here. Now most of the tourists are from Russia.  Some still come from Ukraine (I need to learn more about that dynamic).

The view from my hotel room of the hills behind me is very similar to this photo.  This extraordinary view surely has to be a key reason for Yalta’s charm.

On the right side of the Crimea part of the map you will find ‘Kerch’ which is where Putin built the bridge in record time that connects Russia with Crimea.  Construction began soon after the 2014 vote to reunify Crimea with Russia.  Now tourists by large numbers are driving from Russia onto the Crimean peninsula. That means traffic jams and not many places to park but visitors don’t seem phased as they appear to be having a good time here.  In the gold upper part of the map you can see where I was previously in the Lugansk and Donetsk People’s Republics that are continually under attack by the Nazis.  It is interesting to note that in Canada and the US (Chicago, Brooklyn, etc) there are large enclaves of ‘nationalist’ Ukrainians who today are very active in supporting the Nazis that are shelling the Donbass.  Lt. Col Alexander Vindman (a Democrat) who has been calling out Trump on the Ukraine phone call issue, comes from one of these anti-Russian exile families which indicates there are many deep layers in this current drama playing out in Washington surrounding the US-Ukraine-Russia story.  Don’t just swallow the mainstream media line on this – dig into the bigger Ukraine corruption story. One good source is here.

This is the famous Swallows Nest that is just up the road from Yalta.  It’s quite a dramatic view from there, right off the highway that leads to Sevastopol (where the Russian Black Sea navy base is located).  It was Sevastopol that was the real prize that the US-NATO sought when they orchestrated the coup in Kiev, Ukraine in 2014.  But the people in Crimea were watching the madness of the ‘Maidan revolution’ on TV that year and decided they wanted nothing to do with the Nazis who forced their way into power with the backing of the US (particularly V-P Joe Biden, Sen. John McCain, Asst Secretary of State Victoria Nuland, Secretary of State Hillary Clinton, Sen. Lindsey Graham, Sen. Amy Klobuchar and more).  Thus their vote to seek reunification with the Russian Federation.

My talk yesterday during the conference at historic Livadia Palace in Yalta, Crimea. People from about 30 countries are represented at the event. The conference continues today as we move to a university in Simferopol. Note that the man introducing me is holding up our Space Alert newsletter. They were very pleased to see our extensive coverage of our visit to Crimea in the last edition following our spring Russia Study Tour. You can see it online here. I took pages and pages of notes during the conference yesterday and will write them up ASAP. I made some new friends and will be eager to follow-up on them. Fazebook yesterday told me I had violated community standards for two of my posts and won’t allow me to make posts there until November 14. The two posts were about recent elections in Germany and a photo of US and Russian military vehicles passing one another in northern Syria. So if you wouldn’t mind sharing this video it would be a help since I can’t do it. Thanks to Regis Tremblay for making the video.

The Fifth Anniversary International Conference: “Crimea in the Current International Context” began on November 7 inside the Livadia Palace, Yalta, Crimea.  In these same rooms Churchill, Roosevelt and Stalin met in 1945 to discuss the post-WW II architecture.

The place was packed with participants, observers and media.  Here are some of my many pages of notes from various speakers at the event. They are not posted in any particular order of relevance.

I had several good connections with people I met while at the conference.  Two in particular are of special note.

Costas Isychos from Greece was the former Alternate Minister of National Defence.  He was appointed by Prime Minister Alexis Tsipras in January 2015 but resigned six months later along with five other cabinet members.  Isychos told me that they resigned their posts because Tsipras betrayed the nation [he was elected as an opponent of neo-liberalism] when he agreed to an austerity package with the EU which further increased poverty in the country.  In addition Tsipras agreed to allow the US to dramatically expand its military bases in Greece that are aimed at Russia.

The other person that I formed a close bond with is Kimura Mitsuhiro from Tokyo.  He is a long-time activist and strong friend of Crimea.  We spent lots of time comparing notes about many foreign policy issues.

As one might imagine I learned alot from being at this conference.  Taking in the collective experience and wisdom of those assembled from so many nations was a gift I will always treasure.