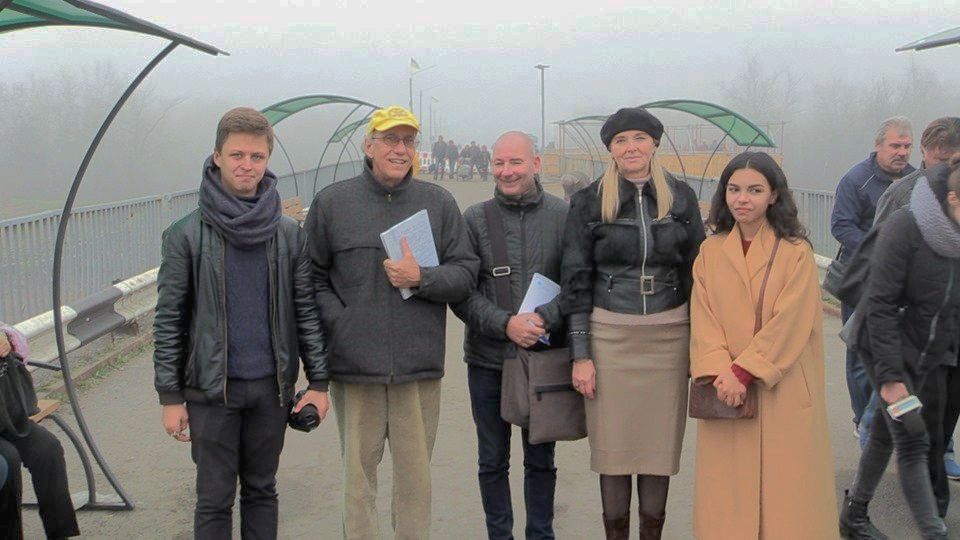 Visiting the blown bridge that links the LPR & Ukraine

We were taken from our hotel in Lugansk (the Donbass) early yesterday on a cold and foggy morning to the Stanitsa Luganskaya bridge that connects the Lugansk People’s Republic (LPR) and Ukraine.  The center part of the bridge was blow up in 2014 and is the only check point that people on both sides have to visit family members, shop, and pick up their pensions in Ukraine.

In the van on the way to the bridge Olga Kobceva told our small international delegation:

“When Ukraine was killing us [in 2014-2015]  their TV stations were saying we were killing ourselves.  Then they began to talk about Russian aggression.  Russia facilitated the negotiations that led to the Minsk Agreement [that established a ‘line of contact’ where both sides were to pull their military forces back.  US-backed Ukraine has continually violated this agreement.  The protocol also calls for the establishment of a federalized nation that gives those in the Donbass autonomy and control over their language, culture and local government.  Even though Ukraine signed the agreement they still refuse to implement it.]

“People still visit with family across the border between Donbass and Ukraine.  The longer Ukraine refuses to seriously negotiate with us, the stronger we get. Steps taken by Ukraine have pushed us to have closer relationship with Russia.  I have many relatives in Russia and in Ukraine but it is unsafe for them to talk to me now. Thanks to Russia’s humanitarian aid our people could survive.”

From the time the bridge was blown up until recently the people crossing the Seversky Donets River had to create unusual ways to climb down and then up the two remaining sections of the bridge.  This was particularly hard for old people using crutches and canes, parents pushing baby strollers, and citizens carrying heavy shopping bags.

Only since July this year (under heavy pressure from the LPR as well as Germany and France) Ukraine committed to repairing the bridge they blew up and has also constructed a decent temporary walk-way for the people to cross the blown section until the bridge is reconnected. On the LPR’s side of the bridge Olga showed us improvements her government is making in order to alleviate the suffering of the people.  A warming center staffed by the Red Cross was built on the LPR side.  (Ukraine’s Army tried to shell the warming center after it was first built.) A covered area was made to protect the people from rain, snow and ice when they have to wait in line to pass thru the immigration posts. Covered benches have been built on the LPR side of the bridge for older people to rest.  Fifty people have died while crossing the bridge.  An ambulance sits

LPR citizens have to go to the Ukraine side to pick up the pensions they earned from many years of working in the formerly united country.  But receiving their pensions is becoming harder.  The Ukraine government is now requiring people on the LPR side to have a permanent address on the Ukrainian side of the bridge.  Ukraine sends workers to check to see if the LPR residents are at that ‘permanent’ address and if they are not, their pensions get cancelled.

Because the LPR has instituted socialized health care people living in Ukraine often come over the bridge to the LPR to get free medical care and medicines.  When I asked our Labor leader host Andrey Kochetov why the LPR does this (how could they afford to do it?) he replied, “These are our people.”

Up to 10,000 people each day cross the bridge (it is open from dawn to dusk year round). Passports are checked on both sides.  Ukraine is now trying to make limits on bringing children over the bridge into Ukraine.

Media from the LPR covered our visit to the bridge and interviewed each of us from the US and Ireland in our delegation.

I told the media I was deeply moved watching the old people with crutches and canes navigate their way across (and around the blown part) of the long bridge. I said it was an outrage that the US was backing a fascist government that is waging war on its own people just because they speak Russian and live near the Russian border.

I came away deeply impressed by the heart of those on the LPR side of the bridge.  Their concern for their people – and those on the other side living in the fascist Ukraine – told me alot about why the US-NATO have been trying so hard to destroy those in the Donbass region of eastern Ukraine.

Their vision of a socialist nation where there are no banks (other than one national bank in the LPR), free health care, and more is a threat to the capitalist west.  And we know from many years experience in places like Cuba, Nicaragua, Venezuela, and Libya, just to name a few, the pathetic ‘leaders’ in Washington always try to smash any upstarts that dare put people before profits.

We’ve seen a series of US-backed ‘Color Revolutions’ in recent years but those now fighting to protect themselves in the Donbass against the Nazis in Ukraine have been the first country to stand and successfully resist the CIA-sponsored coups that only serve the interests of corporate oligarchs.

Sadly few in the world understand the real story in the Donbass because corporate dominated media serve nothing but propaganda when they discuss what is going on in this part of the world.  I am proud, after five years of near daily watching videos of Nazi assaults on the innocents living in the Donbass, to finally be able to travel here and see for myself.