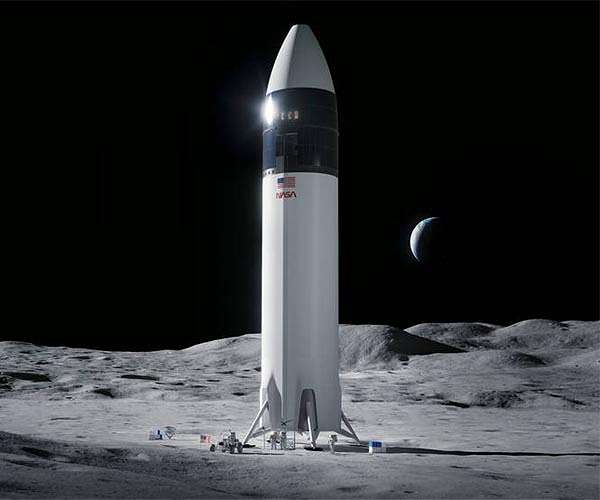 By Paul Brinkmannm,
Published by Space Daily, 7 May 2021

The companies that are protesting the award, Jeff Bezos’ Blue Origin and space tech firm Dynetics, have filed formal complaints with the Government Accountability Office, a federal watchdog agency.

Those protests must be resolved in 100 days, or by Aug. 4, according to federal regulations.

At stake is nothing less than the timetable for NASA’s Artemis program, which aims to put the first woman on the moon by 2024, even though the agency acknowledges that date isn’t likely anymore due to a lack of congressional funding.

“If the GAO sustains a protest and agrees with the protester, it should recommend some kind of way to remedy the problem identified,” Ralph White, managing associate general counsel for procurement law at the agency, told UPI.

“I use the word recommend on purpose because only [Congress or the president] can direct an agency to do anything,” White said.

If an agency defies a recommendation from the GAO, it will refer the matter to congressional committees that oversee the agency’s budget, he said.

Blue Origin, based in Kent, Wash., and Dynetics, based in Huntsville, Ala., were finalists in NASA’s competition to propose lunar landers. But NASA ranked both companies lower than SpaceX on the merits of their proposals, and SpaceX’s bid was billions of dollars lower than the two competitors, according to NASA.

In its protest, Blue Origin accused NASA of downplaying significant risks and unknowns about SpaceX’s Starship. Musk’s company has flown Starship prototypes five times, and the spacecraft exploded in a fireball after four of those flights.

Although SpaceX hasn’t provided detailed plans for Starship lunar landings, the company intends to land without a separate ascent module like the Apollo landers utilized.

According to Blue Origin, such a landing would risk damage to the main engines on Starship if they hit a boulder or other debris coming down. By comparison, Blue Origin’s lander would have a separate ascent module.

“In NASA’s own words, it has made a ‘high risk’ selection,” Blue Origin said in its protest. “Their decision eliminates opportunities for competition, significantly narrows the supply base, and not only delays, but also endangers, America’s return to the moon.”

Both companies have complained in their protests that NASA changed the nature of the lunar lander competition this year due the lack of congressional funding. The two claimed that NASA met only with SpaceX, on April 2, to inform Musk’s company about the change.

“SpaceX was offered the opportunity to reprice its offer based on new budget information that NASA provided only to SpaceX. Unfortunately, Blue Origin was not given a similar opportunity,” according to Blue Origin’s protest.

Dynetics’ protest also alleges that NASA unfairly cut it out of final discussions about the impact of congressional funding and possible changes to the company’s bid.

NASA, however, claims it only met with SpaceX for final price negotiations after deciding SpaceX was the leading bidder, according to the official document explaining its decision as written by Kathy Lueders, NASA’s associate administrator for human spaceflight.

The GAO has no power to void NASA’s decision, but it can uphold the protests and recommend a way for NASA to correct any possible errors in the bid selection, said Scott Amey, general counsel at the Project on Government Oversight, a nonprofit watchdog organization based in Washington, D.C.

“I’d be very disappointed if the agency really did have some ex parte discussion, you know, with only one of the bidders,” Amey said in an interview.

“If that’s the case, it may be in the interest of NASA to reopen the competition, and put all three competitors on a level playing field, even if only for the sake of appearances.”

SpaceX didn’t respond to questions about the protests.

Dynetics also takes aim at SpaceX’s use of a completely new propulsion system for Starship’s new Raptor engines and SpaceX’s plans to use an elevator to lower astronauts to the lunar surface from a door high above on Starship.

In contrast, Dynetics’ lander would have a door much closer to the ground and a ladder similar to that used on Apollo landers.

“No elevator design has ever been successfully used in actual lunar conditions,” Dynetics said in its protest.