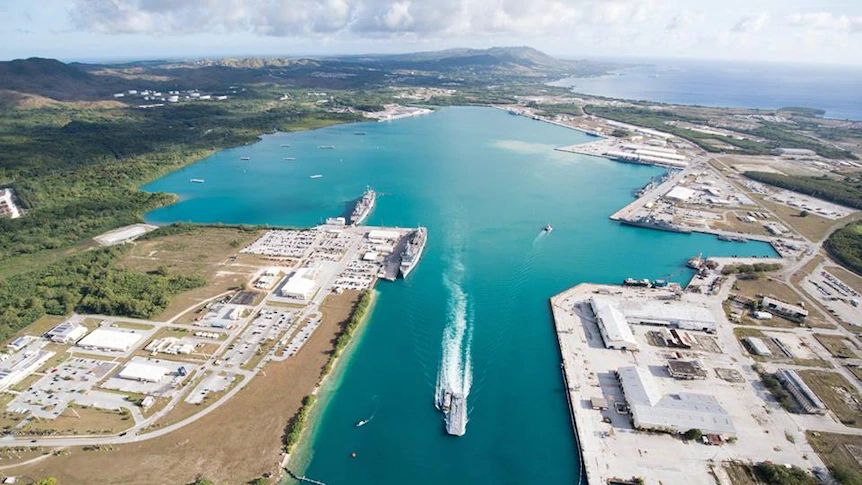 The head of the US Navy’s Indo-Pacific Command is urging Congress to build a new missile defence base in the Pacific as part of a larger strategy to counter China’s military threat to the region.

The Pentagon is seeking $US77 million ($98 million) to build a permanent “land-based integrated air and missile defence system and associated weapon delivery system on Guam”, as outlined in the Indo-Pacific Deterrence Act.

In addition to the defence system, which is designed to track down and destroy missiles before they do harm, the US is considering an increase to its ground-based missiles on Guam that could fire on targets over 500 kilometres away.

It comes amid mounting fears that China could launch an attack on the US Pacific territory, which lies east of the Philippines and south-east of Shanghai.

Admiral Philip S Davidson from the United States Indo-Pacific Command said it was imperative for the US to protect its Pacific territories from a possible Chinese incursion.

“Guam is not just a place that we believe that we can fight from, as we have for many decades — we are going to have to fight for it.”

US plans to deter China in the Pacific

The proposed missile defence facility is part of the Pacific Deterrence Initiative, also called PDI — a reported $US27 billion ($35.5 billion) proposed Pentagon strategy to increase US defence spending in the Pacific.

In submissions to the US Senate Armed Services Committee, the Indo-Pacific Command outlined the need to develop other defence facilities in addition to the one inGuam, in Japan and Hawaii.

The proposal includes an upgrade of “underseas warfare capabilities” and a greater military partnership with Australia, which already hosts over 1,000 US marines in the Northern Territory.

Guam, the site of the closest US military base to Asia, has been the subject of a number of threats from foreign actors.

Last year, China released a  propaganda film depicting a fake bombing of a US Air Force base on the island, pieced together from Hollywood movie clips.

It has also tested a ballistic missile nicknamed the “Guam killer” because of its ability to strike US military bases on the Pacific island.

For some residents in Guam — particularly the island’s indigenous Chamorro people — the proposal for greater military presence on the island is an insult.

Siobhon McManus is a Chamorro teacher and peace activist on Guam, and opposes the idea for a missile defence facility to be built on the island.

“It’s just a reminder that we have always only ever been a piece of American property and it’s very dehumanising,” she said.

Almost a third of Guam’s land is controlled by the US military, and Ms McManus fears its presence is destroying the island’s natural environment.

Sylvia Frain, an expert in US-Pacific relations who is affiliated with the Auckland University of Technology, said Guam was a “prime, strategic location” for the US military, and that within defence circles “all roads lead to Guam”.

That strategic location has made Guam an obvious target for China and put its residents at risk, she said.

“There are missile systems currently pointed to Asia. This is public knowledge. Of course, it’s going to be a target,” she said.

For Moneka De Oro, a Guam-based climate activist and indigenous Chamorro woman, the US military has great support on Guam, with many men and women on the island employed directly in its ranks.

“Every single family here has some sort of tie either through active service or through civilian service and working for the military bases here,” she said.

But Ms De Oro believes the creation of a missile defence system and ramping up of military activity in the Pacific will only make Guam more vulnerable to China.

“Any further militarisation only further increases the size of the target on our backs,” she said.

Other US Pacific territories are also concerned about what the increased military presence could mean for them.

Dr Isa Arriola, an anthropologist and Chamorro woman from Saipan, said although the US did not have a military base in the Northern Mariana Islands, she worried what the future might hold.

“We are often considered … a backup location to military planning that’s happening on Guam, essentially,” she said.

“There’s no slowing down even in the middle of the pandemic, militarism has continued to increase.”

The Indo-Pacific Deterrence Initiative act is currently being considered in the US Congress, and outlines defence budget guidelines for the coming financial year.