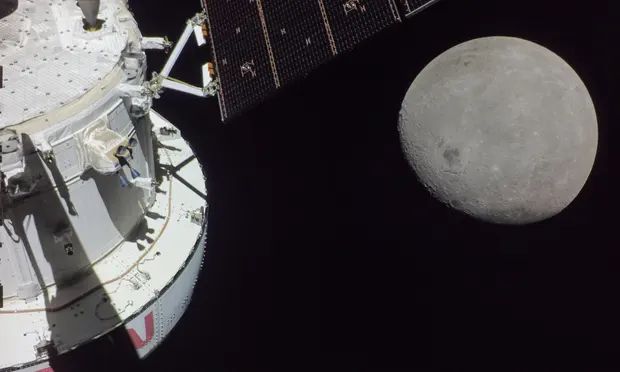 By Rachel Hall,
Published by the Guardian, 26 Decmber 2022

With the success of Artemis, lunar travel is back on the agenda – and a way to produce water on moon is vital for human presence

In 1970, Neil Armstrong predicted there would be people living in Antarctica-style lunar research bases “within our lifetime”. He was wrong: it’s been 50 years since the last Apollo crewed mission.

Perhaps not so very wrong, however. Ten years after Armstrong’s death, lunar travel is back on the agenda, with teams of scientists around the world working to fulfil Nasa’s aspiration to have humans living on the moon within the decade.

Among those is a multidisciplinary team at the Open University, who are finding ways to extract water from lunar rock, with the idea that this could provide the basis for a continued human presence on the moon.

The scientist leading the work, Prof Mahesh Anand, envisages living on the moon in self-sustaining research stations, which would make it easier for humans to explore deeper into the solar system, including perhaps the first crewed mission to Mars.

“It’s our nearest planetary neighbour, it’s something you can see whenever there is a clear sky. For me, there is nothing better than to reach out to our nearest neighbour and find out what secrets it holds. And it turns out that the moon has many, many secrets, many of which can tell us about the history of our own Earth,” he said.

Anand considers the far side of the moon “one of science’s greatest mysteries”.

Anand has been studying samples of moon rock and dust, known as regolith, collected during the original Apollo missions for more than a decade. For a long time, scientists believed there was no water on the moon, but his team discovered that regolith has a high oxygen content, which means water can be produced by adding hydrogen and heating the soil to cause a reaction.

This dovetailed with satellite data that indicates water ice at the cold lunar poles, which has spawned further research by the Open University into how this can be analysed and extracted.

Anand’s colleagues will send up an instrument they have designed in Nasa’s next Artemis mission, scheduled for 2024, called an exospheric mass spectrometer, to drill into rock, withdraw and analyse water.

The research into water extraction is important because it costs an estimated $1m to bring a kilogram of any substance into space, so extracting water would be much more cost-effective.

“If we can find resources to live on land, we reduce the size of backpack we take with us,” said Simeon Barber, the Open University researcher leading on the instrument’s development.

The robotic missions are an important first step. “Before we send humans there, we need to understand the environment, paving the way for developing technological infrastructure,” Barber said.

Anand also wants researchers on other planets to learn from mistakes made on Earth by taking a more sustainable approach. His research has included melting moon dust with microwaves and using 3D printers to construct equipment with which to build a human habitat, and growing plants in volcanic ash, which is similar to moon dust.

This work also has applications back on Earth: he has used the microwave technology developed for reprocessing moon dust to extract valuable materials from mine waste.

Roland Trautner, the space instrumentation development lead at the European Space Agency, which funds and coordinates much of Europe’s space research, said the Open University’s research feeds into a new large-scale programme of European lunar exploration that is “growing quickly”.

“Lunar exploration started many decades ago, but it got an enormous boost during the time of the cold war. The Soviet Union and the west were competing about who would be the first one there. Because it was so driven by politics, technology was in the foreground. There was some science done, but it was on the back burner,” he said, noting that only the final missions returned with significant samples for scientists to investigate, some of which are still used by the Open University.

“For several decades there was limited funding for lunar missions but quite recently this has picked up again to a significant degree. Part of the reason is that colleagues in China and some other countries have focused on the moon and they’ve been very fast and successful. To some degree that’s spawned a new competition, a new race to the moon.”

The new space race, however, is more collaborative, and driven more by science than politics. Trautner expects crewed lunar landings to start within three to five years, with research bases that accept guests on the horizon for 2040-50.

For the first time since the cold war, he thinks, “a new chapter has begun. These are exciting times for lunar science and exploration”, but he is not surprised: “For mankind as a species, it’s natural to want to make the next steps.”