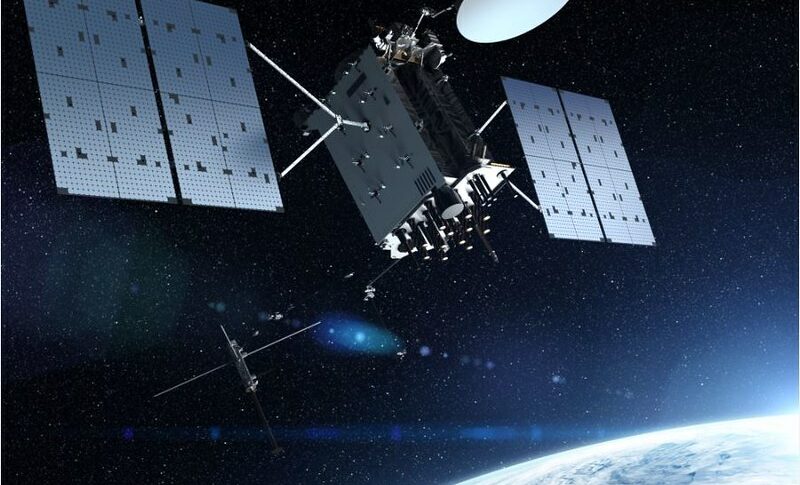 WASHINGTON — The next generation of Global Positioning System satellites could host additional payloads to provide communications services, the U.S. Space Force said in a request for information.

The RFI issued last month by the Space and Missile Systems Center asks contractors to pitch ideas for hosting communications payloads on GPS 3F satellites, the newest version of GPS currently being developed by Lockheed Martin.

GPS satellites provide positioning, navigation and timing data. The Space Force is now deploying GPS 3 satellites. The first of the more advanced GPS 3F version is projected to launch in 2026. These new satellites will have more room and power to support hosted payloads.

The Space Force is considering hosting satellite communications payloads on the GPS constellation starting in 2030.  The preferred frequency bands are X and Ka, but other satcom frequencies may be considered as well, said the RFI.

Space-based communications from GPS satellites would give the military an additional layer of connectivity in medium Earth orbit.

“Due to new space vehicle efficiencies and more capable launch vehicles, the buses for Block 3F satellites are expected to have excess spacecraft weight and power (SWaP) margin which could be utilized to host other payloads,” said the RFI.

The first hosted payloads would have to be delivered in 2029 so they are ready to be launched in 2030. Beyond that, there is “potential for nine additional vehicles to be launched at a rate of about two per year thereafter,” said the RFI. “Payloads must be delivered for integration onto GPS about one year before shipment for launch.”

Hosted satcom payloads are expected to operate for at least 10 years to 15 years.

The RFI noted that it’s only asking for general information from potential vendors and not for contract proposals.