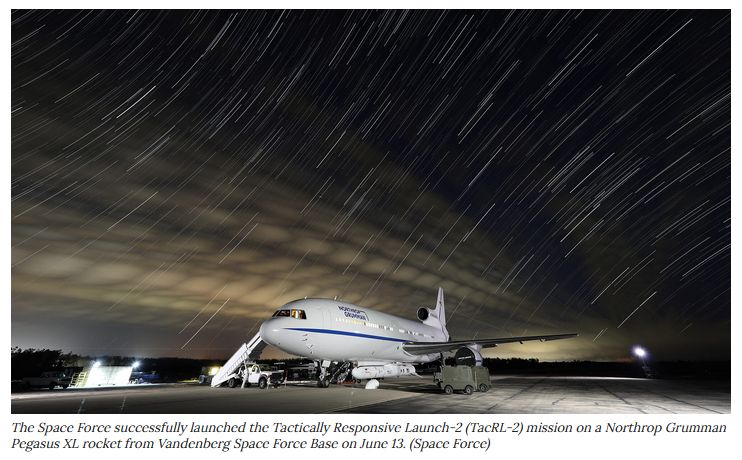 The Senate version of the 2022 defense appropriations bill also includes $50 million, a House aide explained, but the House version only includes $5 million.

WASHINGTON: A dozen House members have signed a letter to the chair and ranking member of the House appropriations defense subcommittee asking for their support in getting $50 million to the fiscal 2022 defense spending bill for tactically responsive space launch.

“The US is currently not prepared to replace or augment space launch capabilities on tactical timelines if capabilities are lost,” says the letter, addressed to Rep. Betty McCollum, D-Minn., and Rep. Ken Calvert, R-Calif.

Citing the recent Russian anti-satellite weapons test, the letter stresses that the US “urgently needs a national commitment to accelerate more responsive, resilient, and affordable space and launch capabilities to counter growing threats on operational timelines.”

The bipartisan effort is being led by Rep. Stephen Horsford, D-Nev., and Rep. Mike Waltz, R-Fla. Both are members of the House Armed Services strategic forces subcommittee responsible for oversight of national security space issues. Most, but not all, the signatories are also HASC members — including Rep. Doug Lamborn, R-Colo., Rep. Mo Brooks, R-Ala., Rep. Marc Veasey, D-Texas, and Rep. Jimmy Panetta, D-Calif., all of whom represent states with strong space industry interests.

The 2022 National Defense Authorization Act requires the Secretary of Defense, in consultation with the Director of National Intelligence, “to formalize a tactically responsive space launch program” and provides $50 million for the effort. The bill specifies that the program guarantee “the ability to rapidly place on-orbit systems to respond to urgent needs of combatant commanders or to reconstitute space assets and capabilities” if they are degraded or attacked.

The Senate version of the 2022 defense appropriations bill also includes $50 million, a House aide explained, but the House version only includes $5 million.

Specifically, the lawmakers want $50 million in research, development, test and evaluation (RTD&E) funds to “enable the FY22 execution of an operationally relevant ‘Responsive Space and Launch Demonstration’ that would leverage this funding and contribute to the wider responsive space architecture. Such a demonstration would provide an end-to-end mission, inclusive of mission planning, integration, and deployment of the satellite system (payload and bus), on-orbit operations, and provision of on-orbit data to the warfighter.”

Space Safari in June 2021 the program lofted its second mission payload, TacRL 2. Two more missions, TacRL 3 and 4, are slated for the third quarter of FY23.

Being able to rapidly launch replacement payloads for satellites degraded or destroyed by adversaries will be important to maintaining space resilience in future conflicts — and that capability has been a long-standing Pentagon goal for more than a decade, but somehow has remained out of reach.