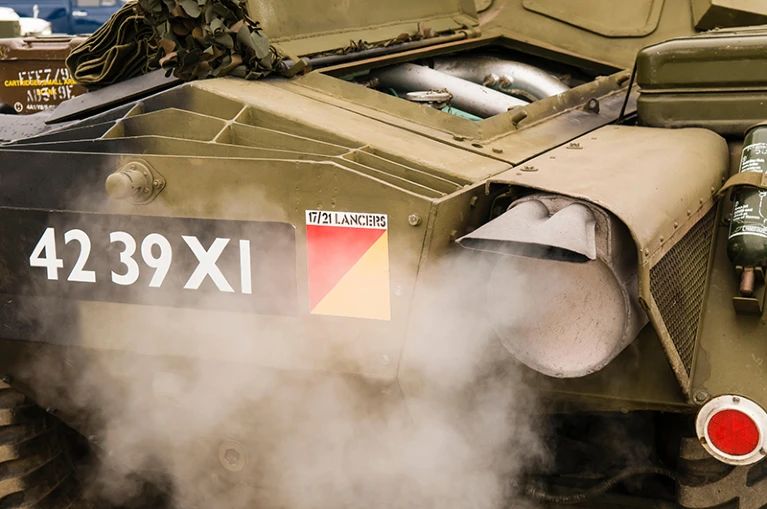 The world’s militaries are heavy emitters of greenhouse gases. No one knows exactly how much; estimates range between 1% and 5% of global emissions, comparable with the aviation and shipping industries (2% each). Yet militaries are largely spared from emissions reporting. This must change, or mitigation measures risk becoming mere guesswork1.

For instance, the US military is the world’s largest in terms of expenditure. If they were a nation, US forces would have the highest per-capita emissions in the world, at 42 metric tonnes of carbon dioxide equivalent (CO2eq) per staff member (see ‘Military emissions’). For each 100 nautical miles flown, the US Air Force’s signature F-35 fighter jet emits as much CO2 (2.3 metric tonnes of CO2eq)2 as an average UK petrol car driven for one year. Each year, jet-fuel use by the US military alone generates emissions equivalent to six million US passenger cars2.

Why are reports from the Intergovernmental Panel on Climate Change and United Nations climate summits silent on military emissions? The short answer is politics, and a lack of expertise. During the 1997 Kyoto Protocol negotiations, US delegates lobbied on the grounds of national security to exclude the military from reporting requirements for greenhouse gases. That approach has stuck, although their argument no longer holds — methods are now available for counting emissions along global supply chains without compromising intellectual-property rights or disclosing sensitive information.

With no international agreement on accountability, reporting requirements, leadership or will to act, monitoring and cutting military emissions are low priorities. Only a handful of forces — including those of the United Kingdom and United States — have published strategy documents on climate action. Across the 27 member states of the European Union, we found only ten militaries that had noted the need for greenhouse-gas mitigation, of which just seven had set targets.

Also missing are accurate methodologies for calculating emissions from military activities. As for any large business, accessing emissions from the military’s permanent sites and routine transport use is straightforward — but recording emissions is near impossible in hostile, fast-changing or insecure locations. A lack of published data also makes it hard to estimate totals for military emissons3.

Military emissions need to be put on the global agenda. They must be officially recognized and accurately reported in national inventories, and military operations need to be decarbonized. That requires more than ‘greening’ military infrastructure or equipment. A concerted effort is needed to reduce military spending on carbon-intensive programmes and equipment. Researchers need to develop transparent frameworks for reporting military emissions, and they must identify data gaps. The 2022 UN Climate Change Conference of the Parties in Sharm el-Sheikh, Egypt (COP 27), and the 2023 conference in Dubai, United Arab Emirates (COP 28), are opportunities to formalize this change.

Reporting of military emissions under the UN Framework Convention on Climate Change (UNFCCC) is incomplete, unclear and inconsistent (see go.nature.com/3eyzi). Some data have been shared on direct emissions from fuel consumption, operation of facilities and consumed power. However, indirect emissions along supply chains are absent, and emissions calculations are often flawed. Some figures might not be flagged as military in origin, and are classified instead under broader categories, such as public buildings and services or general aviation or shipping.

The United Kingdom has one of the best track records in reporting its military carbon emissions. Since 2012, it has published data for direct emissions in the annexes of Ministry of Defence (MOD) reports. In 2018, for instance, British forces emitted around 2.7 million metric tonnes of CO2eq4, roughly equivalent to emissions from 1.5 million UK cars.

Yet, in the figures reported to the UNFCCC in 2019, only 64% of the MOD’s declared emissions were explicitly identified as belonging to the military — those relating to military aircraft and naval vessels. It is unclear how emissions from military bases and ground vehicles were reported. Further research might check whether such emissions were listed under civilian categories. Also unclear is whether all bunker fuels used for international military transport were included.

Reporting in other countries can be even more scattershot. In the United States, records of direct military emissions are located across government departments, and are often opaque owing to ‘national security concerns’. One estimate suggests that activities of the US Department of Defense (DOD) — including all branches of the US armed forces and their civilian support staff — released 55.4 million metric tonnes of CO2eq in 2018 (see go.nature.com/3waw9), roughly equivalent to the emissions of 12 million US cars. Greenhouse-gas emissions from the US military exceed those of many countries, including Switzerland, Ghana and New Zealand. Were the US DOD a nation, it would be the 54th highest emitter globally (see Supplementary Information).

Scant data are available from other nations with large armed forces. These include Russia, which is currently waging war with Ukraine, and China and India, which have more active military personnel than does the United States. Rapid growth for the biggest military power, China, with its two million active personnel, can be expected: earlier this month, President Xi Jinping announced that the country intends to have a ‘world-class military’ by 2049.

Other countries, such as Peru, Indonesia and South Africa, do not have to report their national emissions annually, because UNFCCC obligations vary according to levels of economic development. As emerging economies are often carbon-intensive, their military emissions might be even more significant than those we know about or can estimate.

Analyses of fossil-fuel consumption suggest that the world’s militaries could emit around 0.45 billion to 2.2 billion metric tonnes of CO2eq annually5. The true total might be even higher: factoring in other emissions from energy supplies, raw materials, supply chains and equipment manufacturing could more than triple estimates6. Emissions from warfare would add more5, but are difficult to measure. Fuel consumption during the Iraq war might have released more than 250 million metric tonnes of CO2eq between 2003 and 2011, more than the annual emissions of many countries5.

No methodologies for tracking emissions on military bases or in conflict areas have been published. The North Atlantic Treaty Organization (NATO) is reportedly developing such a framework for its members; little is known publicly about its methodology, robustness and applicability7. We anticipate that supply-chain emissions or emissions from armed conflicts will go unaddressed.

A standardized methodology and comprehensive assessment framework for greenhouse-gas emissions, including those embedded in products across their life cycles, are needed. Although much can be drawn from other industries, military-specific environments and circumstances must be considered.

There are two major gaps. First, the day-to-day footprint of militaries themselves must include the emissions associated with the management of bases and estates — from providing infrastructure, cement and food to feed and house the troops. Second, a reckoning is needed on the impacts of infrastructure damage, land-use changes, socio-economic shifts and post-war reconstruction and recovery8. Despite two decades of progress on documenting the environmental dimensions of armed conflicts, efforts to calculate these emissions are in their infancy.

Russia’s war in Ukraine has drawn fresh attention to the role of fossil fuels in financing conflicts, as a target and as a tool for political coercion. The Ukrainian government is calculating the financial and environmental costs of the impact of the conflict on the climate — the first time that any conflict-affected state has done so — which will be raised at COP27.

Research areas that need investment include methods for independently verifying military-emissions accounting by third parties, including academics and civil society groups, without compromising national security. Breaking down emissions by technology sectors will help to prioritize actions and targets. Studies on the feasibility of adopting low-carbon technologies are key. Software that creates a barcode that can be scanned to reveal a product’s emissions data might be helpful; this is already used in the private sector to track emissions throughout a supply chain, for example in food and agriculture initiatives. Such data can inform declarations of emissions for processes, products or services9.

Once reporting mechanisms are in place, plans for decarbonizing the military must be assessed and improved. Militaries will need support from researchers to do this effectively. One major challenge is ‘lock in’ — emissions from military equipment are fixed for decades, owing to long procurement processes and lifespans. For example, F-16 fighter planes entered service with the US Air Force in 1979, and are not due to be retired until about 2040. Despite proposals to electrify land vehicles, and to promote synthetic fuels for aviation10, fossil-fuel use in global militaries will continue to rise for many years to come.

Warships, combat aircraft and ground vehicles must become more fuel efficient and take advantage of renewables (see ‘Federal energy consumption’). For reconnaissance, lightweight craft, such as drones, and satellite data should be used more often. Solar photovoltaic arrays and electric vehicles should become the norm on military bases. The United Kingdom’s MOD and its Defence Innovation Fund ideas scheme, the ViTAL Living Lab, develop and harness solar, geothermal, hydrogen and electric energy for use on the Royal Air Force’s Leeming base as a testbed.

Life-cycle impacts and raw-material requirements are another black box9. There could be unintended consequences when switching to alternative technologies. For some technologies, such as lithium-ion batteries, large amounts of energy — and subsequent emissions — are required in the supply chain. Using a new technology might increase reliance on rare raw materials, such as cobalt or antimony.

The materials that are required in wartime could differ from those needed in everyday civilian environments. For instance, research investment is needed into low-carbon materials with strong anti-blast properties in lieu of concrete. Military innovation might confer some benefits to the civilian sector. New building materials, photovoltaics and new power sources might be useful where energy is temporarily unavailable, such as in disaster-relief operations.

Military bases also need to cope with climate extremes, such as storm-surge flooding, wind, wildfire and drought. The US DOD oversees more than 1,700 international military facilities on coastlines that could be vulnerable to sea-level rise, according to the Congressional Research Service. A departmental survey (see go.nature.com/3uzh7) in 2019 on 79 installations concluded that nearly two-thirds of them are at risk from recurring flooding, and one-half face threats from drought or wildfires.

All this needs to move beyond plans and high-level discussions that are part of diplomatic efforts, arms-control treaties and other conflict-prevention measures. Crucially, global-security improvements lead to reductions in international military expenditure and its associated emissions. For example, after the end of the cold war, military emissions across NATO members and the Soviet bloc fell markedly between 1991 and 2000. Total US military emissions declined by 44%2.

We call for action in four areas.

First, militaries across the globe must be held accountable. Although national net-zero pledges have helped to focus attention in some countries, international standards and obligations must be agreed. The UNFCCC is the most appropriate forum and must strengthen and reform its reporting protocols to include militaries. COP27 and COP28 are key opportunities for those states that have already engaged on the military-emissions agenda, such as the United States and United Kingdom, to show leadership. Researchers must advocate for common standards for accounting, reporting and reducing military emissions, and these must be transparent, time-bound and measurable.

Second, militaries must improve their capacity to calculate, manage and reduce emissions, and train personnel to do so. Researchers should work with the armed forces to exchange knowledge and best practices from the civil sector; help to develop protocols for military-specific emissions; and use or procure low-carbon equipment.

Third, researchers need to document and understand how armed conflicts impact the climate and society. This dynamic is complex but crucial for identifying low-carbon recovery pathways for countries coming into conflict, such as Ukraine, and for understanding the long-range costs of armed conflict. Finally, independent research is paramount to keep militaries accountable and to uphold obligations made under the UNFCCC. Clearly, there is an urgent need to give researchers the support to conduct independent analyses and provide evidence-based solutions, and militaries should work hand in hand with academia and industry to establish a commonly understood and verifiable means of emissions accounting.