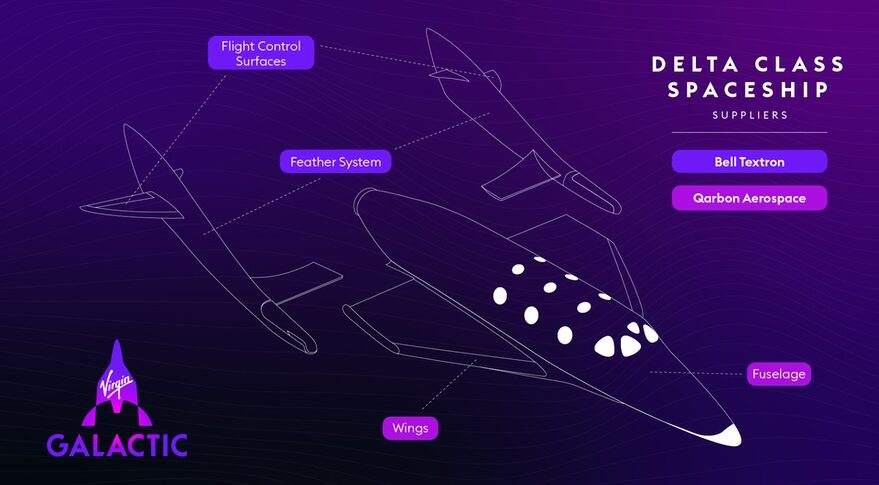 WASHINGTON — Virgin Galactic will work with two aerospace manufacturers to provide the major components of its next-generation suborbital spaceplane.

Virgin Galactic announced Nov. 2 that it reached agreements with Bell Textron and Qarbon Aerospace to produce major subassemblies of its Delta class of suborbital spaceplanes, which Virgin will assemble. The companies did not disclose the value of the contracts.

Virgin Galactic selected the suppliers after a “highly competitive and methodical selection process,” said Swami Iyer, president of aerospace systems at Virgin Galactic, in a statement. He did not disclose how many companies responded to the company’s request for proposals.

Qarbon Aerospace, which produces composite and metallic aerospace structures, will provide the fuselage and wings of the Delta-class vehicles. Bell Textron will produce the control surfaces as well as the feathering system that raises the tail booms for reentry and lowers them again for landing.

The companies will deliver those components to Virgin Galactic, which will handle final assembly at a new factory in Mesa, Arizona, that the company announced in July it would establish. Virgin will also remain responsible for the overall design of the system as well as testing.

The selection of Bell Textron and Qarbon Aerospace is part of a broader effort by the company to diversify its supply chain. The company announced in July it selected Aurora Flight Sciences, a Boeing subsidiary, to build components for aircraft that will carry the Delta-class spaceplanes aloft, replacing the WhiteKnightTwo plane built for flights of SpaceShipTwo. Virgin will handle final assembly of those planes at an existing company factory in Mojave, California.

“The Delta class spaceships are an evolution of our distinctive flight system, designed for improved manufacturability, maintenance and flight rate capability,” said Michael Colglazier, chief executive of Virgin Galactic, in a statement. With the new contracts and the earlier one with Aurora, “we now have the primary suppliers in place to propel the production of our spaceline fleet at scale.”

Virgin Galactic envisions producing up to six Delta-class vehicles a year at the Arizona factory. The vehicles are set to begin revenue-generating payload flights as soon as late 2025 and private astronaut flights in 2026.

The Delta-class spaceplane is critical to Virgin Galactic’s long-term growth plans because of both the number of vehicles produced and higher flight rates. While the current SpaceShipTwo, VSS Unity, can fly no more than once a month, the Delta-class vehicles are designed for weekly flights.

Virgin Galactic has not conducted a spaceflight since July 2021, when VSS Unity reached space with company founder Richard Branson on board. The company said in August that delays in refurbishment of VMS Eve, its WhiteKnightTwo plane, had further pushed back the resumption of commercial flights to the second quarter of 2023.

The company is expected to provide an update on the status of returning to commercial service when it releases its third quarter financial results after the markets close Nov. 3.