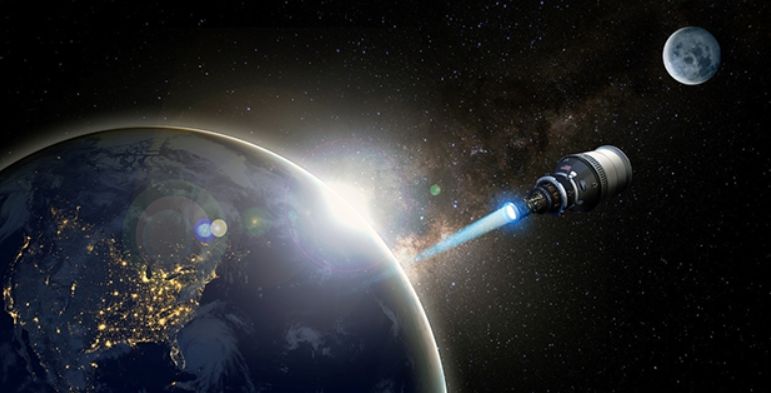 While cislunar surveillance doesn’t require nuclear-propulsion, such a spacecraft could move more rapidly into position to monitor targets of interest. It might also mean the spacecraft would be able to remain active for a longer period thanks to the fuel.

“Some of this is classified, so this answer must be rather general,” he said in an email, explaining that the Demonstration Rocket for Agile Cislunar Operations (DRACO) program has two key goals:

DARPA awarded contracts to General Atomics, Blue Origin and Lockheed Martin last week for Phase 1 of the DRACO program, which has two separate but related parts.

The central focus of the effort, called Track A, is development of a nuclear thermal propulsion (NTP) system for spacecraft, essentially a small nuclear reactor that rapidly heats liquid rocket fuel, converting it to gas and creating thrust.

“DRACO’s NTP system has the potential to achieve high thrust-to-weight ratios similar to in-space chemical propulsion and approach the high propellent efficiency of electric systems,” DARPA’s website explains. “This combination would give a DRACO spacecraft greater agility to implement DoD’s core tenet of rapid maneuver in cislunar space (between the Earth and moon).”

(NASA is experimenting with NTP as well to cut the time it would take robotic and human exploration missions to deep space, including to Mars.)

General Atomics was awarded $22 million to develop the NTP “Demonstration System (DS)” under Track A, Granier said. This includes development of demonstration hardware under the 18-month contract — hardware that may or may not eventually be included in the DRACO spacecraft that DARPA hopes to launch in 2025.

The DS should be “traceable” to the “Operational System (OS) concept” — i.e. the blueprint for the future DRACO spacecraft, Granier elaborated. “Traceable means that the DS should be on the evolutionary path to the OS, for the entire spacecraft, but in particular for the NTP engine itself, which is the focus of Phase 1. The NTP propulsion unit should be ready for incorporation into an OS spacecraft within an order of years after the DS for operational DoD or NASA use.”

Lockheed Martin and Blue Origin are responsible for fleshing out that OS concept, winning $2.9 million and $2.5 million respectively, Grenier said. Under that part of the DRACO effort, called Track B, the two contractors will provide a proposed design — not including hardware — for the entire spacecraft. The idea is that by developing the NTP first, engineers can better figure out what payloads the satellite bus can carry and how to best optimize subsystems, he explained.

“Once the NTP propulsion unit is proven to be viable, then the OS system will be able to tolerate more risk on other subsystems, such as deep space comms, more advanced cryogenic fluid management technologies, etc.,” he said.

It is in the design of the OS where the capability for cislunar domain awareness would come in, with development of sensor suites and communications payloads for the spacecraft.

DARPA defines the cislunar domain as the volume of pace between Geosynchronous Orbit (GEO) at approximately 36,000 kilometers above the Earth — and not coincidentally where many national security satellites operate — and the Moon. This includes, Grenier noted, the Earth-Moon Lagrange points.

The Lagrange points are positions where “the gravitational pull of two large masses precisely equals the centripetal force required for a small object to move with them,” according to NASA’s website.

The Space Force is interested in two of the five Earth-Moon Lagrange points — L1, on a straight line between the Earth and the Moon; and L2, on the far side of the Moon — because they essentially allow a satellite to ‘hover’ in a stable orbit and provide an unobstructed view of the lunar surface. NASA, too, is interested in L1 and L2 because that line-of-sight also eases communications with lunar-surface operations.

AFRL’s Cislunar Highway Patrol System — or CHPS, pronounced ‘chips,’ in homage to the late 1970s TV series about motorcycle-riding cops — will be a small satellite orbiting near the Moon capable of detecting objects traversing cislunar space, as well as tipping and cueing other sensors to enable Space Force to keep track of them.

Indeed, AFRL last Thursday held a classified stakeholder meeting to discuss research and development needed to underpin future military operations beyond the traditional near-Earth orbits used today, according to DoD officials. Neither AFRL nor Space Command would provide any details whatsoever about the meeting — not even a list of participants.

Sean Kirkpatrick, who represents the DNI at Space Command’s Joint Task Force-Space Defense (JTF-SD), said last Tuesday the “summit” was focused not just on R&D needed to counter potential adversary activities in cislunar space, but also “all around the sphere of the Earth, not necessarily in the direction of the Moon.”

This is because “things that could come at us from above” GEO in any direction, he told the AFCEA Intelligence Partnering for Space Power in 2021 virtual conference. “There’s not necessarily a lot of specificity currently about what could happen, or what will happen from that area of concern, but there’s a lot of understanding that things could happen.”

Kirkpatrick explained that “even if a booster were just to be launched on an extremely high apogee to place a satellite in orbit, and then it enters GEO from above … in our paranoid world that’s a problem, because we don’t have the proper types of sensors, and a lot of cases and we certainly don’t have them … in the right places to see things like that happening.

“I think that we are behind that curve already,” he added. “And it might take, you know, the better part of the decade to get right in that regard.”