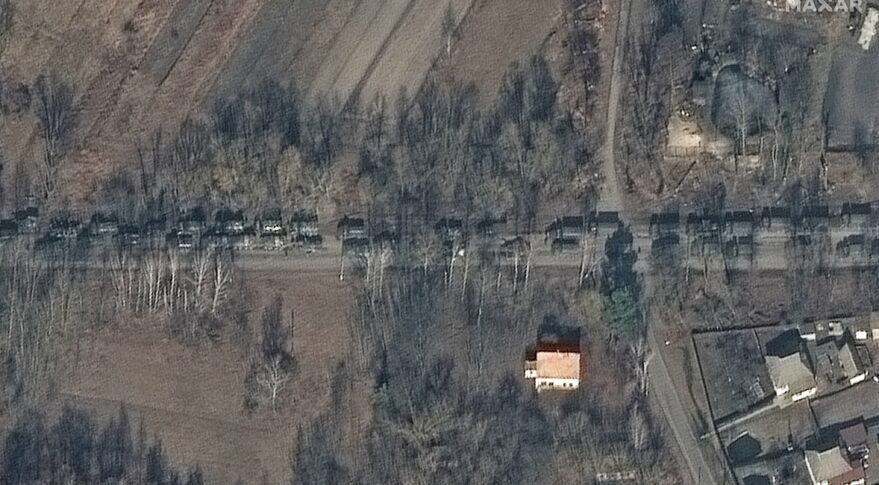 Scott Herman, CEO of Cognitive Space: ‘You don’t get a better opportunity than this to show how remote sensing can support media storytelling’

WASHINGTON – Images collected by commercial satellites have chronicled the buildup of Russian forces on Ukraine’s borders and the ongoing invasion, providing intelligence previously only available from government sources — and seldom released to the public.

The crisis has showcased the capabilities of companies like Maxar Technologies and BlackSky, whose high-resolution satellite images have been ubiquitous for the past several weeks as the conflict intensified.

An organization within the company, called Maxar News Bureau, has created a partnership program with “respected and trusted media organizations, and our team is in regular contact with hundreds of journalists, both here in the U.S. and abroad,” said Jablonsky.

The company also provides pro bono access to satellite imagery to environmental and humanitarian groups through a “SecureWatch” platform.

Jablonsky in a Feb. 28 statement to SpaceNews said Maxar “has made much of this imagery available to news organizations to support global transparency and combat the spread of disinformation. We are proud of our contributions to the public discourse around this situation and hopeful for a peaceful resolution.”

Increased awareness of the value of space data is a welcome development for the commercial geospatial business — a $9 billion industry projected to grow to $37 billion by 2026 — where many new venture-funded firms are rushing to deploy constellations and data analytics services.

“The conflict in Ukraine and its global implications create an opportunity for the new Earth observation space companies to demonstrate their capabilities,” said Scott Herman, CEO of Cognitive Space and a geospatial data expert who works with commercial satellite operators.

“You don’t get a better opportunity than this to show how remote sensing can support media storytelling and help with the general public’s understanding of a crisis like Ukraine,” he said. “The coverage by the major media, much of it is derived from geospatial data from a variety of commercial and open sources.”

But while companies like Maxar are financially able to provide imagery to the news media and nonprofits at no cost, it’s more difficult for emerging companies that need paying customers, Herman noted.

One of the challenges for new Earth-observation companies is that they need to drive sufficient revenue, he said, and public service and media exposure may not be enough to satisfy investors. “Everybody wants to contribute and see their work out there, but you’re diverting resources, and you’re not getting any revenue out of it. So there’s always been kind of a tug-of-war within these companies around crisis support for the media.”

Other forms of space intelligence

Optical imaging satellites use visible, near-infrared and short-wave infrared sensors to produce photographic images, but the downside is that they can’t see through clouds. And Ukraine in winter has notoriously overcast skies.

Synthetic aperture radar (SAR) sensor satellites can penetrate cloud cover and shoot pictures at night, but “a bunch of radar blobs don’t necessarily make a newsworthy picture,” Herman noted. “It may require some enhancement or interpretation for the general public.”

Other space data companies like Spire use nano-satellites with ADS-B receivers that track aviation traffic. Aircraft carry ADS-B transponders, short for Automatic Dependent Surveillance-Broadcast (ADS-B). Herman said this is another form of open-source intelligence that “people are paying a lot of attention to” for clues about Ukraine developments.

“There’s a lot of interesting information out there right now about all the flight diversions,” he said. “A lot of people tracking that ADS-B data are doing it both in terms of what’s happening with commercial flights, but they’re also tracking a lot of the military activities as well.”

Whether it’s overhead imagery, geo-located tweets and videos, ship tracking and air tracking data, Herman said, “the media can now do a lot of source confirmation in ways that they couldn’t do before. And a lot of that has been enabled by the rise in geospatial analytics that’s happened over the last several years.”

Maxar’s primary customer for its satellite imagery is the U.S. government. But as a commercial provider, Maxar can also publicly release images of the Ukraine conflict.

“The U.S. government can step to the front of the line and get control of the camera to take a picture,” he said. “The premium that the government is paying for access to imagery allows them to dictate what targets the camera shoots at over certain areas of the world.”

But for the most part, all the pictures Maxar shoots for the government are publicly released, Quilty said.

“The government has priority, but once the imagery goes into the image library, then Maxar can go ahead and offer it to other customers,” he said. The U.S. government likes that arrangement because it allows valuable intelligence to be shared, given that the NRO cannot release any images from its satellites, which are classified.

“What they love about commercial providers is that the images are freely shareable,” he said. This is important during a conflict because U.S. allies worldwide who wouldn’t have access to the NRO’s data can get unclassified images.

“If commercial imagery didn’t exist, you would have had the U.S. administration waving their hands about the Russians massing troops around Ukraine” and not being able to prove it, Quilty said.

“People on the ground with their cell phone cameras might have gotten some pictures of tanks,” he said, but only satellites could get overhead images of troops massing.

“We couldn’t send a spy plane, or the Russians could shoot it down,” Quilty added, “so yes, it’s hugely beneficial to have a commercial provider that has unclassified imagery that can be shared.”