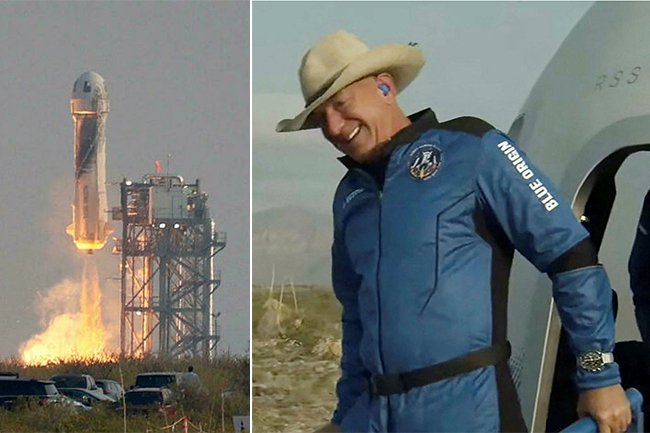 Jeff Bezos (the richest man in the world) successfully took his new wild west rodeo show to the edge of space and once returning to Mother Earth had the audacity to lecture us earthlings on a few things.

“We need to take all heavy industry, all polluting industry, and move it into space. And keep Earth as this beautiful gem of a planet that it is.”

In this same interview, Bezos discussed his plans to expand Blue Origin’s space tourism business over the coming decades, a venture that has the potential to pump massive amounts of carbon and other chemicals into the atmosphere. Unlike ground-based emitters like cars or coal-powered plants, rocket emissions are expelled directly into the upper atmosphere, where they linger for years.

“…. the fuel combination used by [Bezos is] a higher carbon fuel. Research by the University of Colorado indicates that this can damage the stratospheric ozone layer – not only leading to higher levels of damaging ultra-violet radiation reaching the Earth’s surface, but also causing a global heating effect likely to be considerably greater than that from the carbon emissions alone. And the aim of these journeys? A few minutes of ‘zero-gravity’ experience and a nice view. It is hard to see this as anything more than environmental vandalism for the super-rich.“

As the CEO of Amazon, for years Bezos fought against company efforts to unionize, even amid credible reports of inhumane, exploitative conditions for Amazon delivery drivers and warehouse workers. He said, “I also want to thank every Amazon employee and every Amazon customer because you guys paid for all of this.”

The truth is that virtually all space technology ‘research and development’ since the dawn of the space age was done by NASA and the military industrial complex. That means the taxpayers paid for it. And now when it is possible to make gobs of money from space tourism, colonization and mining, the capitalist dominated US government is eager to privatize space operations. They don’t care what the rest of the world thinks. America, after all, is the ‘exceptional’ nation.

It was during the Obama administration that a new law called Commercial Space Launch Competitiveness Act, sometimes referred to as the Spurring Private Aerospace Competitiveness and Entrepreneurship (SPACE) Act of 2015, was signed by the president.

The UK Independent reported in 2015:

Much of the ownership of space is regulated by the “Outer Space Treaty”, a document that was signed by the US and Russia among other countries in the 1960s. As well as saying that the moon and other celestial objects are part of the “common heritage of mankind”, it says that exploration must be peaceful and bans countries from putting weapons on the moon and other celestial bodies.“

The US government has now thrown out that understanding so that it can get rid of “unnecessary regulations” and make it easier for private American companies to explore space resources commercially. While people won’t actually be able to claim the rock or “celestial body” itself, they will be able to keep everything that they mine out of it.

Planetary Resources, an American company that intends to make money by mining asteroids, said that the new law was the “single greatest recognition of property rights in history”, and that it “establishes the same supportive framework that created the great economies of history, and will encourage the sustained development of space”.

So Bezos was wearing the cowboy hat as a message to the world that a new ‘gold rush’ has begun in space and that it will be controlled by rich fat-cat psychopaths like him. They intend to circumvent United Nations space law like the Outer Space and Moon Treaties that state the ‘heavens are the province of all humankind’.

Bezos does not care that each and every one of his joy-ride space launches punches a larger hole in the Earth’s ozone layer exacerbating our climate crisis. This is all about him, his money, his fame, and his super-sized ego.

If we hope to survive on planet Earth, and give life to the future generations, then the global public must demand that space stooges like Jeff Bezos, Elon Musk, Richard Branson, and the rest of their ilk, are restrained and prevented from playing god.