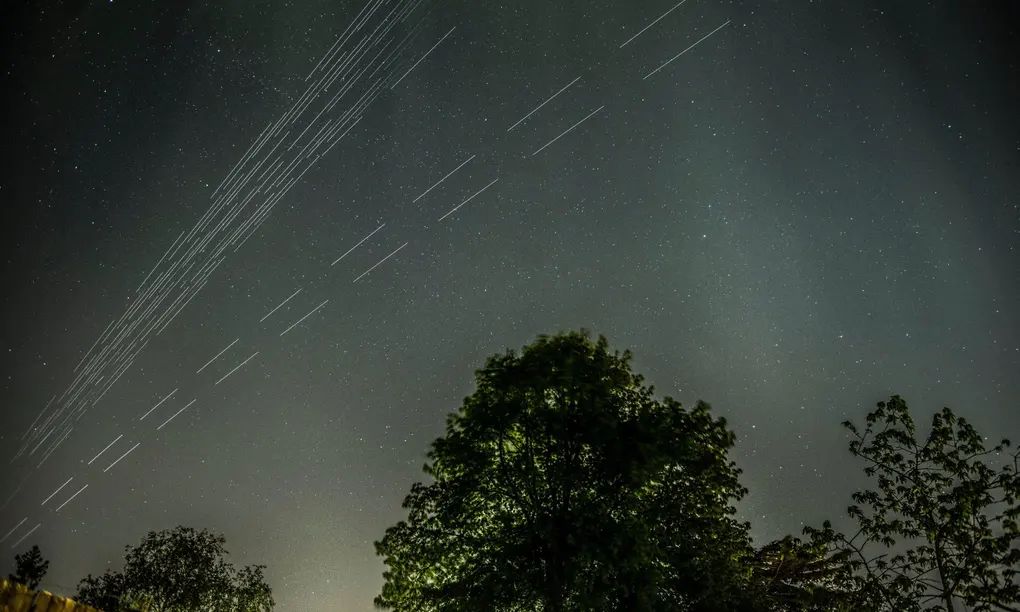 By Stuart Clark,
Published by the Guardian, 12 September 2020

Miniature satellites open up a world of technological possibility. But experts say they degrade the astronomical landscape

The natural serenity of the night sky is a touchstone for all of us. Everyone alive today looks at the same stars no matter where they are located on the planet. But the connection is more profound because, next to our brief lives, the stars are immortal. Shakespeare saw the same stars in the same patterns that we do. So did Galileo, Columbus, Joan of Arc, Cleopatra and the first human ancestor to look up in curiosity. The night sky is nothing short of our common human heritage.

Last year, however, something happened that might change that view for ever. On 23 May 2019, Elon Musk’s company SpaceX launched 60 small satellites from a single rocket. The satellites were the first in what is planned to be a “megaconstellation” of thousands of satellites that will bring internet coverage to the entire planet.

A day later, a satellite tracker from the Netherlands, Marco Langbroek, took a video of the satellites passing overhead – and what he saw blew his mind. “It started with two faint, flashing objects moving into the field of view,” he wrote on his blog. “Then, a few tens of seconds later, my jaw dropped as the ‘train’ entered the field of view. I could not help shouting ‘OAAAAAH!!!!’ (followed by a few expletives…).” He posted a video of what he saw.

Since that time, SpaceX has launched hundreds more Starlink satellites, and although watching these satellites pass overhead has become a new hobby for some, others are worried about the cultural implications, and the way it could affect our relationship with the night sky. Left unchecked, we may never again be able to experience a view of the silent, still cosmos with our own unaided eyes. Instead, it will always be criss-crossed by bright, human-made objects.

“In a couple of generations there will be no one left alive who remembers the night sky before these satellites. They will have grown up with Starlink and the other proposed megaconstellations as part of their conception of the night sky. I think that’s a radical change,” says Alice Gorman of Flinders University, South Australia, a pioneer in the emerging field of space archaeology and heritage.

“One of the reasons people value the night sky is because it gives you a sense of transcendence and connectedness to the universe, and inspires contemplation about the meaning of life and the massive scale of stars and galaxies. That seems to be an experience that people really value and so people have argued that a right to the night sky is kind of fundamental to being human,” says Gorman.

What gives this discussion added urgency is that the more researchers and businesses think about megaconstellations, the more they realise what they can do with them. Telecommunications, navigation, weather prediction, climate monitoring and other Earth observation, space science – the limits are simply those of people’s imaginations.

By any measure, it is an extraordinary moment in the history of our study and use of outer space. But what might be the consequences?

The megaconstellations have been made possible by the miniaturisation of technology, and at the forefront of this drive is the CubeSat, developed by Bob Twiggs of Stanford University and Jordi Puig-Suari of California Polytechnic State University in the 1990s.

CubeSats are tiny satellites. At their smallest they are just 10 x 10 x 10cm. “The size was driven by the size of a Beanie Baby box that they happened to have on hand,” says Scott Williams, a programme director at SRI International, who was developing smaller satellites himself in the late 1980s. He then started working with Twiggs on the early ideas for CubeSats. Back then, no one had megaconstellations in mind.

“It was purely an educational thing, to get students involved in launching something into space within the timeframe of a PhD,” says Samson Phan, a senior research engineer at SRI International.

Traditionally, satellites are about the size of a car. They are hugely expensive to make and take many years to design, build and launch. The goal of the CubeSat programme was for a student team to be able to produce a working satellite in a few years that could transmit a radio signal like the first artificial satellite, Russia’s Sputnik 1. But from the initial idea of developing an educational resource, a grand vision was quick to form.

Williams and his then colleague Victor Aguero both saw a parallel to the way microcomputers had become a “disruptive event” that revolutionised technology. “The vision was: can you do more with less? Instead of building an exquisite trillion-dollar satellite, can you get significant capability out of a whole lot of much cheaper satellites?” he says.

Following their PhDs, Williams and Aguero moved to SRI International, where Williams has focused on the development and exploitation of small satellites in general and CubeSats in particular. And now the fruits of those labours are really starting to show. The small satellite market is exploding.

From 1998 to 2012, more than 120 small satellites were launched. In the next two years, that number more than doubled. The tally now runs at around 500 small satellites a year, mostly made up of the Starlink units. Although they are not CubeSats, they apply the same principle of a small, simple satellite that can be mass produced to keep the cost down.

In July, the UK government bought a £400m stake in OneWeb, which plans to launch its own constellation of 650 small satellites to provide internet and a satellite navigation service, following the UK’s disbarring from the EU’s Galileo project because of Brexit.

Beyond communications and navigation, small satellites open up a whole new world of scientific investigations. The European Space Agency (ESA) now has a dedicated team of people looking into what missions around Earth and in deep space are enabled by CubeSats.

But for all the promise, there are some big problems with megaconstellations. One of the biggest is space debris. If satellites collide in orbit, they produce clouds of debris that can destroy other satellites, potentially starting a chain reaction known as the Kessler syndrome. And with megaconstellations exponentially increasing the number of satellites in orbit, the danger will increase.

“All of a sudden, there’s an increased burden on our space traffic management, which is, at best, in an early stage of existence,” says Hugh Lewis, an expert in space debris at the University of Southampton.

An early illustration of this problem came in September 2019 when one of the first batch of Starlink satellites was found to be on a collision course with the ESA’s €481m Aeolus Earth-observation satellite. Because of a miscommunication between the two organisations, it wasn’t until half an orbit before the potential smash that ESA moved their satellite out of the danger zone.

“There’s a lot of unknowns and there’s a lot of uncertainty associated with things like space safety,” says Lewis, “We don’t have rules of the road yet.” The good news, though, he says, is that nearly all of the commercial space companies that he’s spoken to are aware of these issues and doing their best to address them.

But then there are the astronomers. They perhaps stand to lose the most from the megaconstellations as the satellites will forever be crossing their fields of view, damaging their ability to collect data from the distant universe. Take, for example, the Vera C Rubin Observatory, an American-funded facility in Chile. This gigantic telescope has been in development for more than 20 years and costs millions of dollars. It is designed to begin the deepest survey of the night sky ever in 2022, but now its astronomers are wondering how to deal with the plethora of Starlink satellites that will streak across its images every night.

Robert Massey, the deputy executive director of the Royal Astronomical Society, has taken a particular interest in the consequences and understands that it is a knotty problem. “I recognise that there are multiple uses of space, and that astronomers are not the only community with a stake in that,” he says. “On the other hand, you can also argue that private companies are not the only organisations that have a stake in the now burgeoning commercialisation of low-Earth orbit. They should be regulated, just as they are on the surface of the Earth and in the atmosphere, the seas and so on.”.

To its credit, SpaceX has not turned a blind eye to these concerns. In response to the near-miss with ESA, the company claims to have made changes to its communications system. Additionally, as a result of conversations with the Royal Astronomical Society and others, SpaceX has darkened the latest batches of the spacecraft and installed a “visor” that blocks sunlight from falling on the bulk of the satellite. With those two modifications, the satellites should only be visible to the naked eye when they are in their final orbits – although that won’t stop them potentially damaging the view of anyone using even the smallest telescope.

While some might find this intolerable, others see things very differently. “People tend to fall into two camps,” says Gorman, “Some are like: ‘It’s come to this, we’ve now put so much stuff in space that it’s going to be in our face all the time’, and the other kind of people are incredibly excited.”

Williams is one of the latter. “The stars are nice and the planets are nice but if you’re trying to captivate an eight-year-old, it needs to move. I recall the first time I saw a manmade object going across the sky. It was amazing,” he says. “I think as these constellations get bigger, and this kind of image becomes more easily accessible to the youth, I think they’ll look up at those things and wonder: what can we do with that?”

Indeed, there were many people who have already been thrilled by the sight of the Starlink trains, flooding social media with images and exclamations. But Massey thinks that this is driven more by novelty value and that, with time, the interest might wane. “If people see a string of bright satellites moving across the sky, of course they’re very interested in that. I think the problem is when you have a sky absolutely full of them, even if they’re fainter. It’s a bit like a blue sky being full of planes and contrails. We don’t necessarily see that as something to celebrate,” says Massey.

The history of humankind has been one in which we have regularly re-evaluated our association with the night sky: from a heavenly realm of gods, to a place of mystical influence over our lives, to a universe of unreachable celestial objects, to its modern incarnation as a realm of destinations that we may one day colonise. Perhaps the constant presence of visible satellites is just another of these turning points.

Whatever camp you fall into, there is no doubt that this is a dramatic change to what has previously been an unadulterated way of contemplating nature and our place within it. And only time will tell what the consequences of that change will be.