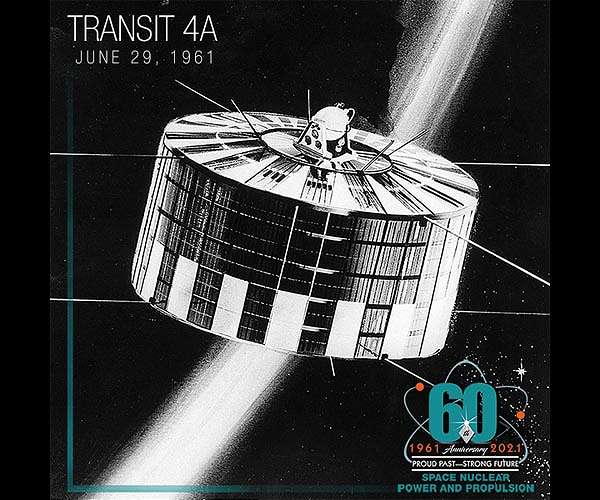 By Jan Wittry for Glenn News,
Published by SpaceDaily, 30 June 2021

Cleveland OH (SPX) – Six decades after the launch of the first nuclear-powered space mission, Transit IV-A, NASA is embarking on a bold future of human exploration and scientific discovery. This future builds on a proud history of safely launching and operating nuclear-powered missions in space.

“Nuclear power has opened the solar system to exploration, allowing us to observe and understand dark, distant planetary bodies that would otherwise be unreachable. And we’re just getting started,” said Dr. Thomas Zurbuchen, associate administrator for NASA’s Science Mission Directorate. “Future nuclear power and propulsion systems will help revolutionize our understanding of the solar system and beyond and play a crucial role in enabling long-term human missions to the Moon and Mars.”

From Humble Beginnings: Nuclear Power Spawns an Age of Scientific Discovery
On June 29, 1961, the Johns Hopkins University Applied Physics Laboratory launched the Transit IV-A Spacecraft. It was a U.S. Navy navigational satellite with a SNAP-3B radioisotope powered generator producing 2.7 watts of electrical power – about enough to light an LED bulb. Transit IV-A broke an APL mission-duration record and confirmed the Earth’s equator is elliptical. It also set the stage for ground-breaking missions that have extended humanity’s reach across the solar system.

Since 1961, NASA has flown more than 25 missions carrying a nuclear power system through a successful partnership with the Department of Energy (DOE), which provides the power systems and plutonium-238 fuel.

“The department and our national laboratory partners are honored to play a role in powering NASA’s space exploration activities,” said Tracey Bishop, deputy assistant secretary in DOE’s Office of Nuclear Energy. “Radioisotope Power Systems are a natural extension of our core mission to create technological solutions that meet the complex energy needs of space research, exploration, and innovation.”

There are only two practical ways to provide long-term electrical power in space: the light of the Sun or heat from a nuclear source.

“As missions move farther away from the Sun to dark, dusty, and harsh environments, like Jupiter, Pluto, and Titan, they become impossible or extremely limited without nuclear power,” said Leonard Dudzinski, chief technologist for NASA’s Planetary Science Division and program executive for Radioisotope Power.

That’s where Radioisotope Power Systems, or RPS, come in. They are a category of power systems that convert heat generated by the decay of plutonium-238 fuel into electricity.

“These systems are reliable and efficient,” said June Zakrajsek, manager for NASA’s Radioisotope Power Systems Program office at Glenn Research Center in Cleveland. “They operate continuously over long-duration space missions regardless of sunlight, temperature, charged particle radiation, or surface conditions like thick clouds or dust. They’ve allowed us to explore from the Sun to Pluto and beyond.”

RPS powered the Apollo Lunar Surface Experiment Package. They’ve sustained Voyager 1 and 2 since 1977, and they kept Cassini-Huygens’ instruments warm as it explored frigid Saturn and its moon Titan.

Today, a Multi-Mission Radioisotope Thermoelectric Generator (MMRTG) powers the Perseverance rover, which is captivating the nation as it searches for signs of ancient life on Mars, and a single RTG is sustaining New Horizons as it ventures on its way out of the solar system 15 years after its launch.

“The RTG was and still is crucial to New Horizons,” said Alan Stern, New Horizons principal investigator from the Southwest Research Institute. “We couldn’t do the mission without it. No other technology exists to power a mission this far away from the Sun, even today.”

Great Things to Come: Science and Human Exploration
Dragonfly, which is set to launch in 2027, is the next mission with plans to use an MMRTG. Part of NASA’s New Frontiers program, Dragonfly is an octocopter designed to explore and collect samples on Saturn’s largest moon, Titan, an ocean world with a dense, hazy atmosphere.

“RPS is really an enabling technology,” said APL’s Zibi Turtle, principal investigator for the upcoming Dragonfly mission. “Early missions like Voyager, Galileo, and Cassini that relied on RPS have completely changed our understanding and given us a geography of the distant solar system…Cassini gave us our first close-up look at the surface of Titan.”

According to Turtle, the MMRTG serves two purposes on Dragonfly: power output to charge the lander’s battery and waste heat to keep its instruments and electronics warm.

“Flight is a very high-power activity. We’ll use a battery for flight and science activities and recharge the battery using the MMRTG,” said Turtle. “The waste heat from the power system is a key aspect of our thermal design. The surface of Titan is very cold, but we can keep the interior of the lander warm and cozy using the heat from the MMRTG.”

As the scientific community continues to benefit from RPS, NASA’s Space Technology Mission Directorate is investing in new technology using reactors and low-enriched uranium fuel to enable a robust human presence on the Moon and eventually human missions to Mars.

Astronauts will need plentiful and continuous power to survive the long lunar nights and explore the dark craters on the Moon’s South Pole. A fission surface power system could provide enough juice to power robust operations. NASA is leading an effort, working with the DOE and industry, to design a fission power system for a future lunar demonstration that will pave the way for base camps on the Moon and Mars.

NASA has also thought about viable ways to reduce the time it takes to travel to Mars, including nuclear propulsion systems.

As NASA advances its bold vision of exploration and scientific discovery in space, it benefits from 60 years of the safe use of nuclear power during spaceflight. Sixty years of enlightenment that all started with a little satellite called Transit IV-A.

Video: After 60 Years, Nuclear Power for Spaceflight is Still Tried and True