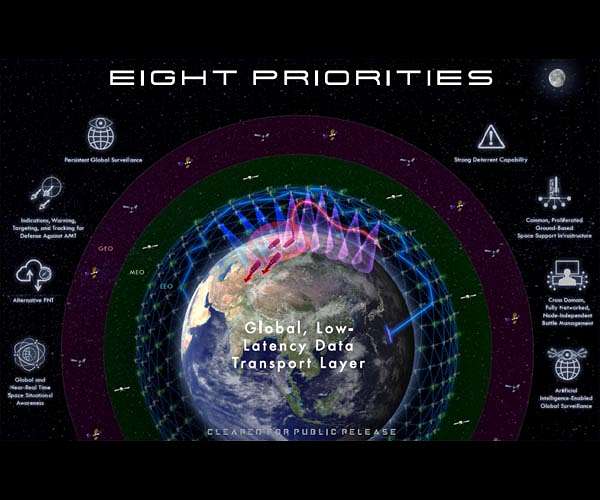 Washington DC (AFNS) – As the Space Development Agency builds out the National Defense Space Architecture, it looks to a biannual “warfighter council” to provide guidance about what is actually important to those who will use the systems, the agency’s director said today.

“We want to make sure that we address our customers,” Derek Tournear said. “The customers, in this case, are the combatant commanders.”

The warfighter council meets twice a year to ensure the agency is aligned with upcoming exercises that will provide SDA a chance to demonstrate its capabilities, he said.

“And then, most importantly … to make sure that everyone is aligned with what is included in our minimum viable product for the next tranche,” Tournear said.

The National Defense Space Architecture will include hundreds of Earth-orbiting satellites that gather targeting and tracking information and instantly transmit it to warfighters and weapons systems. The architecture involves seven layers: transport, tracking, custody, deterrence, navigation, battle management and support.

As part of the SDA’s focus on proliferation of satellites and spiral development of the NDSA, officials have said, new tranches of satellites with improved capabilities are expected to be launched every two years.

Tournear said the NDSA will provide two capabilities to warfighters. The first, he said, is beyond-line-of-sight targeting for time-sensitive ground and maritime targets.

“We want to be able to detect, track and target anything that is a mobile missile launcher or ship and be able to send those targeting solutions directly down to a weapons platform,” he said.

The second capability is similar to the first, but it focuses on a different target: enemy missiles already in flight, such as cruise missiles or hypersonic glide vehicles.

“Everything we do is focused on these two capabilities,” he said. “How can we get these capabilities in the hands of the warfighter as rapidly as possible?”

Satellites for Tranche 0 of the NDSA are expected to launch in fiscal year 2022, Tournear said. For that, the “minimum viable product,” he said, is warfighter immersion.

“The whole goal there is to allow people – allow the warfighters – to see what the data are, to start to use those data in their exercises and have familiarity so that they can include that in their operational plans moving forward,” he said.

The warfighter council is tasked with ensuring that SDA is on target with what the minimum viable product should be for each tranche, Tournear said.

“That’s how SDA works to ensure that we meet the needs of the warfighter,” Tournear added.

The Tranche 1 request for proposals will be released to industry in August, he said, and the plan is to have those satellites on contract for by the end of the calendar year.

“In other words, we are developing these products on the spiral mindset,” Tournear said. “And the product is then going to be used by the customer, which is the [combatant commanders]. So, we want to make sure that whatever we are doing aligns with their needs and [that] we can address those without following the standard requirements-based products that get you into that incremental innovation approach.”