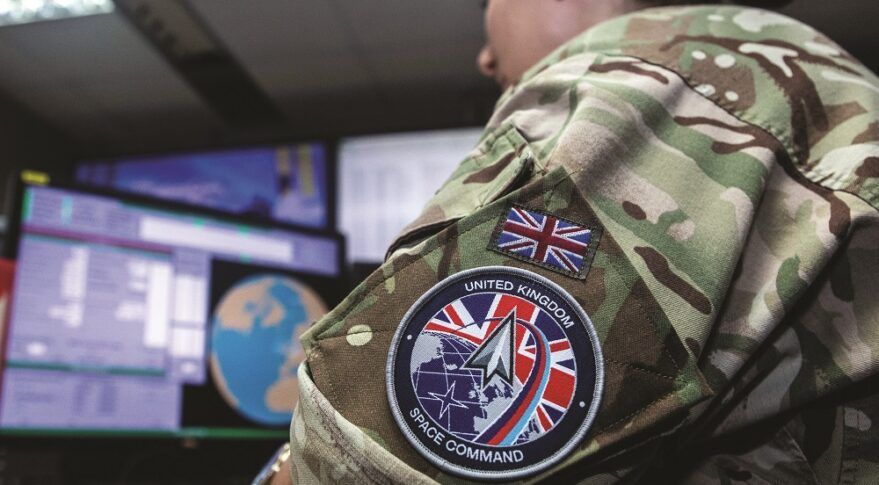 The United States has no closer ally than the United Kingdom. The two nations have collaborated on space-related security efforts for decades.

U.S. and U.K. space officials are now discussing the next steps to strengthen the partnership, a conversation that has gained momentum in recent months due to concerns that satellites are becoming military targets and a stronger defense posture is needed to deter and counter threats.

The teamwork between the two nations is already strong, but the MOU “seeks to deepen collaboration,” Pepper told SpaceNews. “The fact that we have a U.K. one-star general on the U.S. Space Command headquarters staff speaks volumes.”

Brigadier Paul Tedman, a British Army officer, works full-time at U.S. Space Command headquarters in Colorado Springs, as deputy director for policy and strategic partnerships. In that role, he serves as an exchange officer for a three-year term under the U.S. chain of command.

U.S. Space Command is a combatant command the Pentagon re-established in 2019 to oversee military operations in the space domain. The United Kingdom stood up U.K. Space Command in April 2021.

Pepper said the enhanced MOU with the United Kingdom could serve as a model to enhance U.S. and U.K. partnerships with other nations.

“We established a program called ‘pathway to partnership,’ which establishes a method for allies and partners to integrate with U.S. Space Command,” he said. “The pathway allows any space capable country to join at the appropriate level and then progressively deepen their integration with the U.S. over time.”

In a statement to SpaceNews, Tedman said the ESC MOU with the U.K. is the “most mature level of this pathway.” The United Kingdom is “in the vanguard of this work and we will quickly follow with other nations later this year,” he added. The MOU “allows us the freedom to identify areas of mutual interest as well as cohere and converge our efforts.”

The United States and Britain are signatories of the Combined Space Operations Vision 2031, along with Australia, Canada, France, Germany and New Zealand. The document encourages responsible use of space and recognizes increased threats from “aggressive counter-space programs of other nation states.”

This overarching agreement, announced in February, serves as a foundation, said Pepper. The U.S. and the U.K., meanwhile, are also interested in pursuing projects and initiatives on a bilateral basis, which led to the enhanced MOU.

During a meeting in England in June, a team led by Tedman mapped out priorities for the next three years to increase cooperation with the United States, said Royal Air Force Air Commodore Mark Flewin, head of operations, plans and training at U.K. Space Command.

Flewin, who hosted the meeting, told SpaceNews that areas likely to be pursued under the enhanced MOU include joint development of new capabilities, wargames and training exercises, and greater information sharing.

“Everything we do in space depends on effective information sharing,” he said. “So it’s really important we get this right.”

The U.K. Ministry of Defense is developing new space systems with U.S. cooperation in mind, said Flewin. These include a transport layer of small satellites in low Earth orbit called Minerva, and an intelligence surveillance and reconnaissance (ISR) constellation to support military operations.

“The partnership with the U.S. in space has been an evolutionary journey,” said Flewin. “The enhanced MOU is just a natural next stepping stone. It’s very much looking at interoperability opportunities, as we go after that collective endeavor to sustain our freedom of action in space.”

Flewin said he could not discuss specifics of how the U.S. and U.K. space commands might conduct joint operations. “But suffice it to say that it’s absolutely core to the enhanced MOU being able to operate seamlessly.”

Wargaming and training are high on the list, too. British forces have participated in events like the annual U.S. Schriever Wargames, a multinational event that began in 2001.

The U.K. also sends personnel to Space Flag — an annual exercise started by the U.S. Air Force in 2017 and now managed by the Space Force — and Global Sentinel, a multinational space situational awareness exercise launched by U.S. Strategic Command in 2016 and now overseen by U.S. Space Command.

“We do have an ambition in due course, certainly within the timeframe up to 2025, to run a U.K.-led space exercise for the benefit of the broader international community,” he said. Another aspiration is to develop a U.K. Space Academy that would offer U.S.-accredited courses “so U.S. personnel can partake in our education and training just like we partake in U.S. education and training.”

Godfrey, who was in Washington in June for meetings with senior defense leaders, noted that the United Kingdom released a new military space strategy in February and announced plans to invest $1.7 billion in space technologies over the next decade.

Close cooperation with the United States goes back many years, particularly in areas like space surveillance and missile warning. U.K. Space Command operates the Royal Air Force Fylingdales ballistic missile early warning radar that supports the U.K. and U.S. militaries. Since the Cold War, the radar has been part of the U.S. missile defense system and the U.S. space surveillance network that monitors objects re-entering the atmosphere.

The Enhanced Space Cooperation MOU signed with U.S. Space Command in April “allows us now to look at where we’re going in the future and how we collaborate,” said Godfrey. U.K. military budgets are far smaller than the U.S., “so I’ve got to make sure that where we go in capability terms, we really do add value,” he said.

“Many of the discussions we’re now having are about understanding where the U.S. is going, where we can add value, and with the wider partners as well, the allies and partners from Five Eyes, the Combined Space Operations Vision and NATO as well,” said Godfrey. “So there’s an awful lot that we need to do.”

The Five Eyes is a decades-old intelligence alliance between Australia, Canada, New Zealand, the United Kingdom and the United States.

“The U.S. is the global allied leader in space,” Godfrey said. “And so I could go off and spend that billion and a half on all sorts of different things. But if I talk about it being a little cog, and if we can put our little cog in the U.S. machine in exactly the right place, that will make it more efficient.”

There are growing threats that are building in the space domain, Godfrey added. “The U.S. can’t do this alone.”

He called Russia’s Nov. 15 live-fire test of an anti-satellite missile “one of the more difficult things we’ve had to deal with.” The test destroyed a defunct Soviet-era satellite, creating thousands of pieces of orbital debris.

The No. 1 priority now for U.K. Space Command is space domain awareness and “understanding what is going on out in that environment,” said Godfrey. “And that’s very much where the U.K.- U.S. collaboration and the other allies’ collaboration come in,” he added. “We’re all looking at the same thing in space and all using our different sensors to build that picture of what’s going on.”

Gen. John “Jay” Raymond, U.S. chief of space operations, noted in a speech last year at the London Air & Space Power Conference that the alliance with the United Kingdom was built over the course of more than 50 years and reached a new level in 2019 with Operation Olympic Defender.

The U.K. was the first country to be invited to join the U.S. Space Command-led Olympic Defender, a coalition created to shore up space defenses against aggressors and deter hostile actions in space. The other members are Australia and Canada.

Under the agreement, the U.K. became the first country to gain access to the Standardized Astrodynamics Algorithm Library, or SAAL.

The data in the SAAL library is used to help predict the locations and trajectories of satellites and objects in orbit. Access to the SAAL allows analysts at U.K. space operations centers to interpret, predict and integrate data shared by the U.S. 18th Space Control Squadron, at Vandenberg Space Force Base, California, the U.S. Space Command unit responsible for space traffic management.

Flewin said space launch is another area where he sees growing cooperation with the United States. U.K. Space Command, he added, is hugely supportive of efforts by the country’s civil space organization, the U.K. Space Agency, to launch satellites from the United Kingdom.

Although the U.K. Space Agency is not part of the MOU with U.S. Space Command, Britain does not separate civil and military efforts like the United States.

“I think one of the really key points for us is that defense and civil space are not separable. They very much work hand in glove,” he said.

The U.K. Space Agency has been leading a push to establish commercial smallsat launch capabilities from U.K. spaceports. In June 2020, it signed the Technology Safeguards Agreement with the U.S. government, paving the way for U.S. companies to operate from U.K. spaceports.

U.K. launch is important for the nation’s defense strategy as well, said Flewin. “Our civil partners are leading the enterprise, and we are very much in a supporting role,” he said.

Flewin is especially enthusiastic about the U.K.’s burgeoning partnership with the U.S. National Reconnaissance Office (NRO).

The NRO announced in May it is teaming up with the U.K. Ministry of Defence to launch experimental smallsats to low Earth orbit in late 2022 on a Virgin Orbit air-launched rocket. Virgin Orbit’s carrier aircraft will take off from Newquay Airport in Cornwall, England, to perform what’s expected to be the first space launch to originate from British soil.

The Virgin Orbit LauncherOne mission will fly two Prometheus 2 cubesats carrying pathfinder experiments in support of the Minerva remote-sensing constellation the U.K. is developing to monitor radio signals from space. Prometheus 2 is a collaboration between the U.K. Ministry of Defence and international partners, including the NRO.

Another payload on that mission is a joint experiment developed by the U.S. Naval Research Laboratory and the U.K. Defense Science and Technology Laboratory, called CIRCE, short for Coordinated Ionospheric Reconstruction CubeSat Experiment. The mission will help researchers better understand changes in the Earth’s upper atmosphere, which is important to the military because it affects the performance of over-the-horizon communications and radar.

Prometheus 2 and CIRCE are “two great examples of collaboration … and something we’re very excited about,” said Flewin.

The U.K. Space Command, he said, sees these space missions as a “real opportunity to capture the imagination of the nation and inject that passion into younger people in terms of the opportunities that the space profession may offer them in the future.”