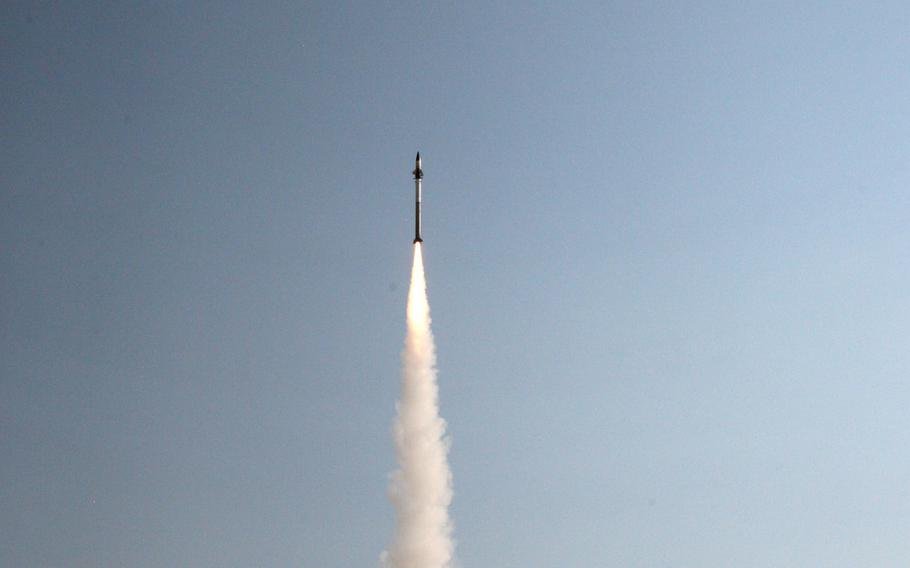 By Wyatt Olson,
Published by Stars and Stripes, 22 October 2021

The U.S. Army has deployed Israel’s Iron Dome missile-defense system to Guam through November to gauge how well the battery can be integrated with the Pacific island’s existing defenses.

The system arrived on Guam this week via commercial sealift and arrived this past week, Capt. Nicholas Chopp, a spokesman for 94th Army Air and Missile Defense Command, told Stars and Stripes by phone Thursday.

“It’s an entire battery – the radar system, the control center and launchers,” said Chopp from the 94th’s headquarters at Joint Base Pearl Harbor-Hickam, Hawaii.

Soldiers from the 2-43 Air Defense Artillery Battalion from Fort Bliss, Texas, arrived on Guam several weeks ago and are manning the system, he said.

No live-fire operations are planned during the temporary deployment, Chopp said.

The Iron Dome battery on Guam is one of two the Army procured last year. The pair cost $373 million, part of $1.6 billion the U.S. has pumped into the program since 2011, according to a May report by Bloomberg news service. Israel-based Rafael Advanced Defense Systems developed the system, which U.S. defense contractor Raytheon started co-producing in 2014, according to Bloomberg.

Congress in the 2019 National Defense Authorization Act required the system be deployed to an operational theater before the end of 2021, Chopp said.

Congress mandated the purchase of two Iron Dome batteries as an interim measure until the Army develops a long-term solution to threats from missiles, rockets, drones and mortars.

The test battery has been set up in remote jungle in the northwest part of Andersen Air Force Base. It sits near the existing Terminal High Altitude Area Defense, or THAAD, anti-ballistic missile system, which the Army has operated on Guam since 2013.

Iron Dome is designed to protect ground troops by destroying short-range missiles and drones. It complements THAAD, which intercepts short- to intermediate-range ballistic missiles in their final descending stage.

The system has brought down more than 1,500 targets with a success rate exceeding 90%, according to the Raytheon Missiles & Defense website. Israel has used the Iron Dome successfully several times during conflicts in Gaza.

The Army live-fire tested the system for the first time in August at White Sands Missile Range, N.M., where it “successfully engaged eight cruise missile surrogate targets,” the Army said in an Aug. 23 news release.

“The Department of the Army identified Guam as the location they wanted to send the system for testing, which is why 94th is responsible for this mission,” Chopp said.

The Guam trial is three-pronged, he said.

First is the test of deployability, determining how easily and how best to get it where it is needed, he said. The missile-defense command is interested in whether the battery can be airlifted back to the U.S., Chopp said.

Second is gaining a better understanding of the logistics required to sustain the system when deployed.

Third, the Army wants to see how Iron Dome integrates with the THAAD unit.

“Are we able to integrate it into THAAD architecture to make it work toward a more layered defense?” he said.