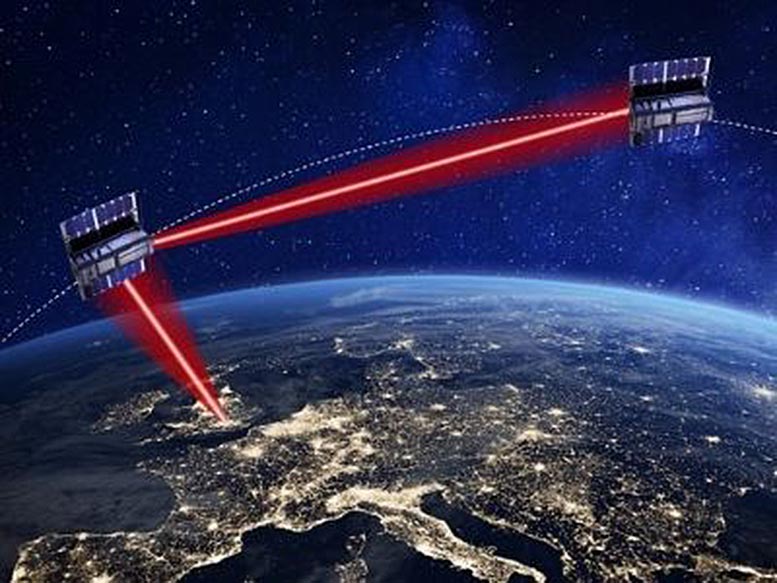 Currently satellites use radio frequency to transmit data, but this is limited in terms of speed, capacity, and data security. However, researchers at Northumbria University are working to develop a new laser-based communications system for small satellites, known as CubeSats, which has the potential to transform the satellite communications industry.

By using lasers instead of radio frequency, the CubeSats become much more secure and can transmit 1,000 times more data per second.

The University was awarded £360,000 last year to run the discovery phase of the project. This further funding – which brings the total amount awarded to more than £1 million – will enable the research team to build and test their laser system over the next 12 months.

They plan to piece together three CubeSats – making a device roughly the same size as a shoe-box – to hold the new laser communication system. This poses a significant challenge as it requires technologies normally used on much larger scales to be redesigned and redeveloped to fit into this much smaller device and withstand the atmospheric conditions in space.

Their ultimate aim is to develop an off-the-shelf product for major global organizations and telecoms providers which can be sent into orbit easily and cheaply and which will improve data transfer in space. It will also improve real-time satellite monitoring of environmental issues on Earth, enabling climate scientists to see high-resolution images and even live-streaming of remote areas.

It is hoped that the first devices will be ready for extensive testing in early 2023, with a goal to set them into orbit by 2025.

The UK Space Agency announced the award of almost £7 million of funding through its National Space Innovation Programme. Northumbria is one of eleven leading UK organizations, including a mixture of businesses and just three other universities – Cambridge, Edinburgh and the Open University – to have been awarded a share of the funding to put into action the latest advances in space innovation.

Dr. Eamon Scullion, a solar physicist in Northumbria’s Solar-Terrestrial Science research group, is leading the project. He said: “We are absolutely delighted to have secured this funding to further our research. This award will enable us to move to the next phase of our plans, where we can put our ideas into practice to build and test our designs.

“This is no mean feat. We need to carefully design, test and miniaturize electronic boards, optical lasers, receivers, and transmitters which can fit together in the satellites and be ‘space qualified’, meaning they will be tested to ensure they continue to work at an optimal level whilst in orbit, dealing with the impact of radiation, atmospheric drag, and extremely cold space temperatures.”

Cyril Bourgenot, technology development lead at Durham University’s Centre for Advanced Instrumentation added: “This new technology will enable communication between satellites at an unprecedented speed. The challenge, in this project, is to fit all this cutting-edge technology in only three CubeSat units, basically the size of a whisky bottle box.”

Professor Louise Bracken, Pro-Vice-Chancellor for Research at Northumbria University, said: “The Government recently launched the National Space Strategy, which outlines its long-term plans to grow the UK space sector and satellite communications are a key element of this.

“Our Solar-Terrestrial Science research group has grown in recent years and is becoming one of Northumbria’s distinctive areas of research excellence, with a growing influence and recognition from major research funders and business partners.

“It is especially pleasing to see that Northumbria’s work in this area being recognized as so innovative, more so given the importance the government has placed on investing in satellite communications over the coming decade.”

Science Minister George Freeman said the awards would help the UK put into action the latest advances in space innovation.

“Satellites in space are helping us solve some of the most significant challenges we face,” he said. “Through the National Space Strategy we are putting the UK at the forefront of unleashing these innovations. This new funding will take game-changing ideas from the UK space sector and our brilliant scientists and turn them into reality.”

Northumbria University is becoming well known for its multi-disciplinary research into space. The University’s Solar-Terrestrial Science research group is leading studies to monitor and predict space weather to reduce the risks this poses to communications systems, satellites and power grids, while the Aerospace Medicine and Rehabilitation Laboratory is leading studies into the impact of reduced gravity on astronauts’ bodies and how this can be translated into conditions commonly faced on Earth, such as back pain. In addition, Northumbria University houses world-leading expertise in space law, undertaking pioneering work on the governance framework for human activity in outer space.