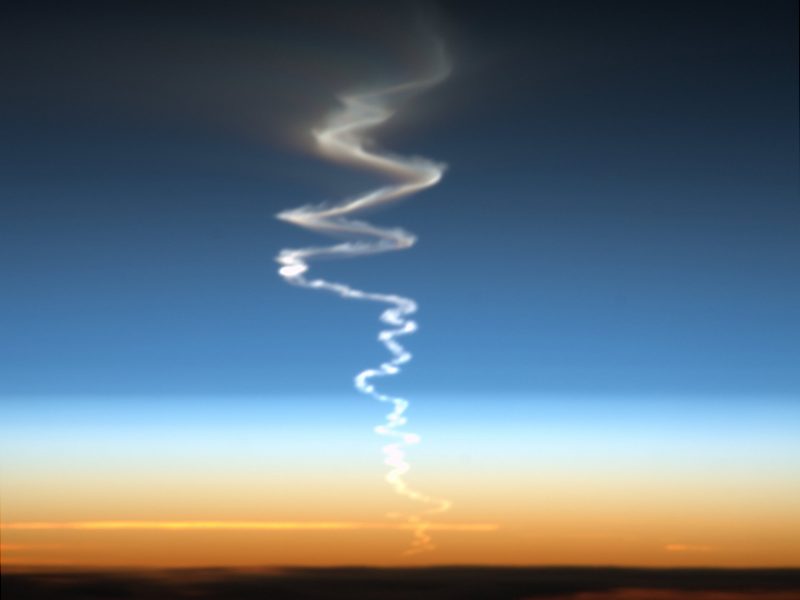 With the space industry’s rapid growth, rocket exhaust will increasingly accumulate in the atmosphere. How this accumulation might affect the planet is unknown—because we’re not taking it seriously.

The global space industry is on the verge of a great increase in the number of rockets launched into Earth orbit. The global launch rate has already more than doubled in the past decade. Transformational innovations such as rocket reusability, thousand-satellite constellations, space tourism, global surveillance, tracking of the Internet of Things, proliferated low-Earth-orbit constellations, and other emerging technologies are expected to further supercharge launch demand in coming decades. The space industry, already an indispensable part of the global economy, is preparing for a surge in growth of a kind not seen since the birth of the space age.

As the number of launches increases, rocket engine emissions increase in proportion. Rocket engine exhaust contains gases and particles that can affect Earth’s climate and ozone layer. These emissions historically have been assumed to be not much of a threat to the global environment because the space industry was deemed small and unchanging. Whether that assumption holds true for today’s rapidly growing space is an important question that needs scientific attention.

The Nature of Rocket Emissions

The various rocket engine propellants produce different emissions. The most common gaseous emissions are water vapor and carbon dioxide from liquid and solid fuels, as well as hydrochloric acid from only solid fuels. The global quantities of these gas emissions from rockets, even at increased launch rates, do not significantly affect the global climate or ozone layer, and they are dwarfed by atmospheric inputs from other sources [Larson et al., 2017]. Because of the unique nature of their combustion chemistry, rocket engines emit large amounts of black carbon when compared to, for example, a modern jet engine.As an important aside, water vapor emissions from individual launches can notably impact the mesosphere and ionosphere. Increased polar mesospheric cloud blooms, attributed to specific launches, have been frequently observed [Stevens et al., 2012]. Transient dropouts in electron content have also been observed in expanding ionospheric plumes, mainly from their impact on space-based navigation signals. Although not presently a global concern, at some increased launch rate, upper atmosphere launch plumes will become ubiquitous and so affect global mesospheric and ionospheric processes and properties.

Particulate emissions from rockets, on the other hand, could have important impacts on climate and ozone [Ross and Sheaffer, 2014; Voigt et al., 2013]. Rocket engines emit various amounts of submicrometer-sized particles of soot (or black carbon, BC) and alumina (aluminum oxide) directly into the stratosphere.

Because of the unique nature of their combustion chemistry, rocket engines emit large amounts of BC when compared to, for example, a modern jet engine.

During flight through the stratosphere, BC can account for as much as several percent of the rocket emissions [Simmons, 2000]; the equivalent measure for a modern jet engine is smaller by a factor of 100. In 2018 BC-producing rockets (all but the hydrogen fuel type) emitted about 225 tons of BC particles into the stratosphere, comparable to the annual amount of BC emitted by global aviation [Stettler et al., 2013]. Meanwhile, solid-fueled rockets emitted about 1,400 tons of alumina particles into the stratosphere.

Because particles emitted by rockets are small, they reside for 3 to 4 years in the stratosphere, where they accumulate. The “black” BC particles absorb solar radiation and slightly reduce Earth’s albedo. The “white” alumina particles reflect solar radiation and so increase the albedo slightly. Paradoxically, however, both have the same consequence for the underlying atmosphere: a reduction in the intensity of solar flux entering the top of the troposphere. Solar flux reductions caused by stratospheric particles are well understood to cool the lower atmosphere [Caldeira et al., 2013]. Therefore, and perhaps unexpectedly, rocket launch emissions contribute to cooling of Earth’s lower atmosphere and surface.

Globally averaged, present-day rocket particle accumulations cool the troposphere by about 0.02 watt per square meter [Ross and Sheaffer, 2014], whereas carbon dioxide emissions from global aviation warm the troposphere by about 0.03 watt per square meter [Lee et al., 2009]. Although these two effects involve different physics, the comparison nevertheless provides a useful context for understanding the relative magnitude of the climate impact of rocket launches. The magnitude of present-day cooling from rocket particles is about the same as the magnitude of warming from aviation carbon dioxide. In other words, rocket launches cool Earth’s surface by about the same amount that aviation warms it.

It would be an overinterpretation to conclude that rocket cooling mitigates some greenhouse gas (GHG) warming. Research shows that Earth responds to stratospheric particle injections in complex ways, with some atmospheric regions becoming warmer and others cooler, on subglobal and subseasonal scales [Kravitz et al., 2012]. Similarly, Earth will respond to rocket particle injections in complex ways. Unraveling this complexity and accurately assessing the potential effects of the coming surge in rocket emissions require sophisticated computer modeling efforts. Such efforts have yet to be realized…