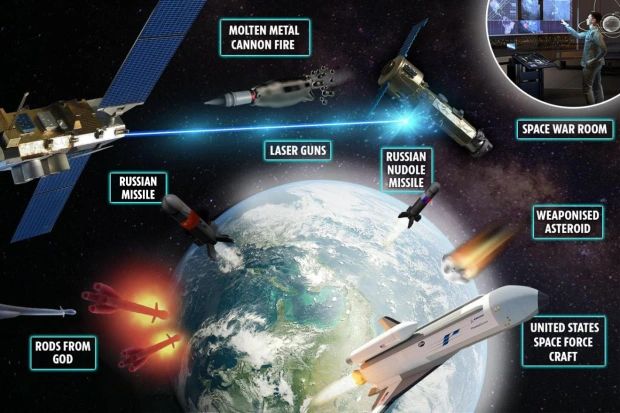 WEAPONISED asteroids, “rods from god” raining down on Earth and cannon firing molten metal and — it sounds like something from a sci-fi movie.

But these bizarre weapons may soon become a reality as space becomes the final frontier for superpower warfare.

The reality of a space war moved closer today as Putin revealed a new alliance with China to create space weapons that could unleash havoc in the West if its satellites were targeted.

Speaking at his annual news conference, the Russian strongman leader said the partnership was “strategic” amid growing tensions with NATO.

As previously revealed by Sun Online, Russian and Chinese space weapons could send the West into the Dark Ages should it destroy satellites.

It is feared an orbital onslaught could shut down hospitals, crash the economy, knock out communications, and cause mass blackouts.

In light of these developments, Sun Online takes a look at what is currently being developed.

Russia’s new weapon dubbed “Star Warrior” has the West worried as it can blast satellites out of orbit at heights of up to 500 miles above Earth.

It comes after Putin used the weapon to destroy a redundant Soviet-era Tselina-D military reconnaissance satellite — blasting it into an orbital debris storm.

It uses the ominous-looking and pyramid-esque Don-2N radar to detect incoming threats and blast them out the sky — which can also detect threats in space.

The centrepiece of the radar is a supercomputer called Elbrus-2. Once threats are detected, the 14TS033 missiles can reportedly accelerate to speeds of up to Mach 12 – some 15,000mph. And they are believed to be able to hit targets some 500 miles over the Earth, with the ISS orbiting at heights of around 250 miles.

The US is currently developing a space war room called the Hallmark programme.

He said: “The first one is to create a more effective human decision maker in respect to space battle management command and control.

“In other words to to get information into a human being’s head so they can make a decision about a military situation that has escalated in space.”

Many experts believe the total weaponisation of space  is inevitable.

Michael Krepon, a space security expert and co-founder of the Stimson Center think tank in Washington DC, said a treaty banning the weaponisation of our orbit could be futile.

He told the Sun Online: “One country could assert that another is putting weapons in space, while another could deny it.

“And what then? How do you deal with a deployed technology that can be put to good use like cleaning up space junk as well as bad use – disabling a satellite?

“A laser can be used for orbital course corrections as well as for burning up the innards of a satellite.

“Would you ban all lasers?”

Dr Krepon compared the space arms race to the balance of power between nuclear-armed states during the Cold War.

The Rods from God

This strange but utterly terrifying weapon has been dubbed “rods from God” and is based on the concept of creating man-made meteorites that can be guided towards the enemy.

But instead of using rocks rods the size of telephone poles are deployed.

These would be made out of tungsten — a rare metal that can stand the intense heat generated by entering Earth’s atmosphere.

One satellite fires the rods towards the Earth’s atmosphere while the other steers them to a target on the ground.

Reaching speeds of 7000mph they hit the ground with the force of a small nuclear weapon — but crucially creating no radiation fall out.

As bizarre as it sounds, a US Congressional report reveals the military has been pushing ahead with the kinetic space weapons.

Weapons expert Amy F. Woolf said: “One warhead would be designed to destroy or disable area targets like airfields or buildings, using a reentry vehicle loaded with tungsten rods — known as flechettes — that would rain down on the target and destroy everything within an area of up to 3,000 square feet.

“The other might be able to destroy hardened targets, like underground bunkers or reinforced structures, if it were accurate enough to strike very close to the target.”

This intriguing idea is being developed by the US Defense Advanced Research Projects Agency (DARPA).

The unique thing about the projectile is that it can be morph into the best shape to travel in space or penetrate its target.

It is called the Magneto Hydrodynamic Explosive Munition or MAHEM.

This game-changing rail-gun can fire a jet of molten metal, hurled through space at several hundred miles per second by the most powerful electromagnets ever built.

The molten metal can then morph into an aerodynamic slug during flight and pierce through another spacecraft or satellite and a munition explodes inside.

It is thought the weapon will have greater efficiency, control, and precision and it is touted for use in space.

Currently, it is being developed for handheld weapons but it is expected to be adapted in the future.

This sounds like a far-fetched idea but soon it may come technically possible for a major space power to deflect an asteroid on to its enemy.

Already NASA experts have developed a technology called HAMMER that they hope could nudge rocks before they smash into Earth.

This would be done by strategically targeting nuclear missiles into the rocks until it knocks them off course.

But experts point out there is nothing to stop a power steering an asteroid towards its enemy.

There are over 18,000 asteroids whose orbit occasionally brings them close to Earth.

China, which is already emerging as a major spacefaring power, has announced it wants to build its HQ on the Moon and then use it to reach Mars which it also intends to colonise.

Russia recently claimed it was planning to establish a facility which would be built by an army of humanoid robots.

All three competing powers have recently established military space forces and are sure to base legions of troops to protect their interests.

For well as being a platform to project power across Earth’s orbit, there is a huge mining potential on the Moon, especially helium-3 production for the energy-hungry human race.

Just as back at home, competition between colonial powers over resources may spark conflict between competing nations, just as it has done back home since the dawn of mankind

Big brother in the sky

While it is keen to create a space force, the US also wants to consolidate its satellite fleet so it can view any part of Earth where it wants, whenever it wants.

DARPA is currently forging ahead with its SeeMe satellites which involve two dozen satellites grouping together to allow detailed imagery from space.

The high-quality live top-down footage can be used by troops on the ground via their tablets.

Already the United States is powering ahead with its spacecraft, although China is busy developing one of its own.

The top-secret American XS-1 under development by DARPA.

It can travel ten times the speed of sound and launch missiles.

Meanwhile, an unmanned craft is currently being developed in the China Aerodynamics Research and Development Centre in Mianyang, Sichuan province, which is also known as Base 29.

What worries Pentagon chiefs is that Russia and China continue to launch “experimental” satellites.

These conduct sophisticated on-orbit activities, at least some of which are intended to advance their space war capabilities.

Some technologies with peaceful applications — such as satellite inspection, refuelling, and repair — can also be used against adversary spacecraft, a report stated.

Lasers and high-powered microwave gun systems could be fitted to spacecraft or satellites because they have the range.

The US is running a laser gun programme called Excalibur.

It uses electricity to emit lasers which can concentrate devastating energy rays on their targets.

According to the Russian MoD, the Peresvet laser cannon – which the US called “disturbing” back in August – was put into service on December 1.

The deadly laser cannon is now being used by the Russian armed forces.

In the last several years China has carried out numerous ballistic missile tests with targets in space.

In February of this year, it managed to destroy its own satellite.

A US intelligence report read: “Russian and Chinese destructive ASAT (antisatellite) weapons probably will reach initial operational capability in the next few years.”