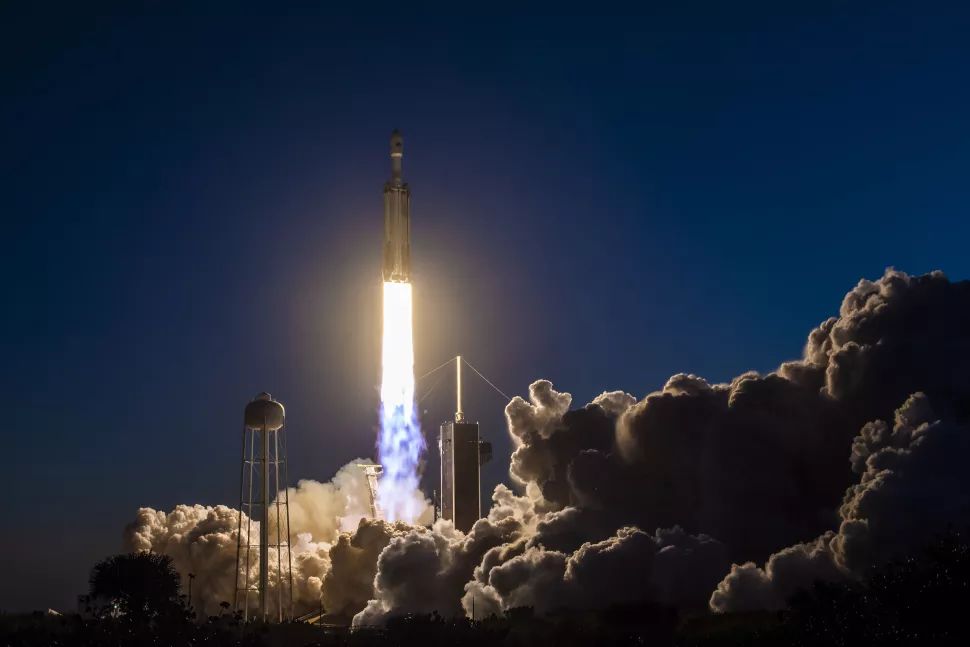 The Falcon Heavy consists of three modified first stages of SpaceX’s workhorse Falcon 9 rocket. These three are strapped together, the central one sporting a payload-carrying upper stage.

Falcon Heavy first-stage boosters are designed to be reusable, like those of the Falcon 9, and two of them came back to Earth successfully on Sunday: USSF-67’s side boosters touched down safely at Cape Canaveral Space Force Station, which is next door to KSC, eight minutes after launch. It was the second landing for each of them; both participated in USSF-44, a Falcon Heavy mission for the Space Force that launched on Nov. 1, 2022.

The central booster on USSF-67 was a new vehicle, and it will not get a chance to fly again. It ditched into the Atlantic Ocean as planned not long after liftoff on Sunday, having used too much of its fuel to come back home again.

The Falcon Heavy’s upper stage, meanwhile, continued carrying its payloads to orbit. But we didn’t get to see much of that journey; SpaceX ended the launch webcast just after booster touchdown, at the request of the Space Force. It’s unclear when the payloads are scheduled to be deployed.

The primary satellite on USSF-67 is Continuous Broadcast Augmenting SATCOM 2 (CBAS-2), which is headed to geostationary orbit, about 22,200 miles (35,700 kilometers) above Earth.

Also going up on USSF-67 was the Long Duration Propulsive ESPA (LDPE)-3A, a payload adapter that can hold up to six small satellites, according to EverydayAstronaut.com .

Five of those slots were filled on USSF-67, the Space Force statement revealed. LDPE-3A carried two satellites, called Catcher and WASSAT, for Space Systems Command, the arm of the Space Force that’s responsible for developing and sustaining space capabilities for American warfighters.

Catcher is a prototype sensor designed to keep tabs on possible hazards caused by space weather, EverydayAstronaut.com reported. “WASSAT most likely stands for Wide Area Search Satellite, which is some sort of camera/sensor designed to monitor other satellites and gather data on their trajectories and anomalies like changes of their orbits,” the outlet wrote.

The other three satellites riding aboard LDPE-3A were developed by the Space Force’s Space Rapid Capabilities Office (SRCO), which aims to get new off-Earth assets aloft quickly and efficiently.

November’s USSF-44 was the first Falcon Heavy mission in more than three years, a drought that was caused primarily by customer delays in getting their payloads ready for liftoff. The other three Falcon Heavy flights (in addition to USSF-44 and USSF-67) launched in June 2019, April 2019 and February 2018.

That debut liftoff, a test flight, was quite memorable. It sent SpaceX founder and CEO Elon Musk‘s red Tesla Roadster into orbit around the sun, with a spacesuit-clad mannequin named Starman at the wheel. The car will likely keep cruising through deep space for millions of years before finally slamming into Venus or Earth, orbit-modeling studies suggest.

The Falcon Heavy’s 27 first-stage Merlin engines generate more than 5 million pounds of thrust at liftoff, according to its SpaceX specifications page. The Heavy was the most powerful rocket in operation until NASA’s Artemis 1 moon mission lifted off on Nov. 16.

That flight, which sent an uncrewed Orion capsule to lunar orbit and back, was the debut launch for NASA’s Space Launch System (SLS) megarocket, which produces about 8.8 million pounds of thrust.

SpaceX could wrest the rocket-power title back from NASA soon, however. The company is gearing up for the first orbital test flight of its giant Starship Mars rocket, which will use 33 Raptor engines to roar off the pad with a mind-blowing 16 million pounds of thrust — more than any rocket ever built.