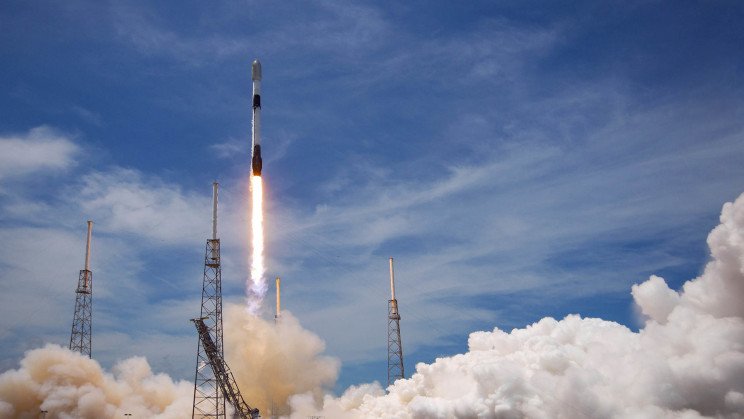 By Chris Young,
Published by Interesting Engineering, 26 May 2022

Paving the way for secure blockchain cryptography from space.

The world’s first “crypto satellite” is now in orbit.

Shortly after sending the payload on its way to low Eart orbit (LEO), the Falcon 9 rocket’s first stage came back to land at Cape Canaveral.

Notably, the rideshare mission launched the world’s first “crypto satellite”, an interesting milestone for a company whose CEO Elon Musk is firmly rooted in crypto culture — only this week, news emerged that a deepfake of Musk is being used to scam crypto holders.

The satellite, called ‘Crypto-1’, was designed by U.S. satellite startup Cryptosat to lay the foundations for secure cryptography related to the blockchain in space, according to a report from Forbes India.

The small satellite is roughly the size of a coffee mug and it was built using off-the-shelf parts. As it will be physically unreachable in space and it will relay open communications, no one can tamper with the system and anyone with an antenna can listen to the satellite’s transmissions. It will be used to launch secure blockchain and Web3 platforms.

Cryptosat has already carried out a few tests on the International Space Station aimed at investigating data security applications in space. In March, the company tested the Drand protocol, the internet’s first production-grade, publicly verifiable randomness beacon, on the orbital station.

“We’re basically joining the Uber of spaceflight,” co-founder of Cryptosat Yonatan Winetraub told Cointelegraph in an interview. “Everybody goes into the same orbit and we’re one of the passengers.”

“SpaceX launch a bunch of satellites, each one of them is doing something else,” he added, “It doesn’t matter for our service, we are hoping to use our satellite to provide cryptographic services for our customers here on Earth which won’t interfere with the other satellites at all.”

Cryptosat’s other co-founder Yan Michalevsky said Crypto1 is the world’s first off-world ‘root-of-trust’ and that it wouldn’t be dependent on other satellites built by other companies. One exciting potential application Michalevsky highlighted was that Crypto1 could be used for zero-knowledge proof protocols, which are increasingly used for online voting systems.

Landed back at Cape Canaveral
(Humans for scale) pic.twitter.com/itiQ48JYmk

“There’s a lot of need for this,” Michalevsky told CoinTelegraph. “If we’re looking into protocols, especially in Web3, there are whole financial systems and smart contract systems, kind of digital legal agreements that depend on the trustworthiness of the cryptography behind it.” Michaelevsky also noted that Crypto1 could enable the first deployment of an entire blockchain from space, with communications carried out via radio frequency.

Shortly after the successful launch of Transporter-5, Musk shared an image on Twitter (shown above) of the Falcon 9 first stage booster on the landing with a caption saying “humans for scale”.

SpaceX’s Transporter-5 mission also carried NASA Ames’ Pathfinder Technology Demonstrator-3 spacecraft and a number of experimental payloads. In total, the mission deployed 39 payloads. Some of these will deploy more smallsats in the coming weeks, bringing the total number of spacecraft launched by Transporter-5 to 59.